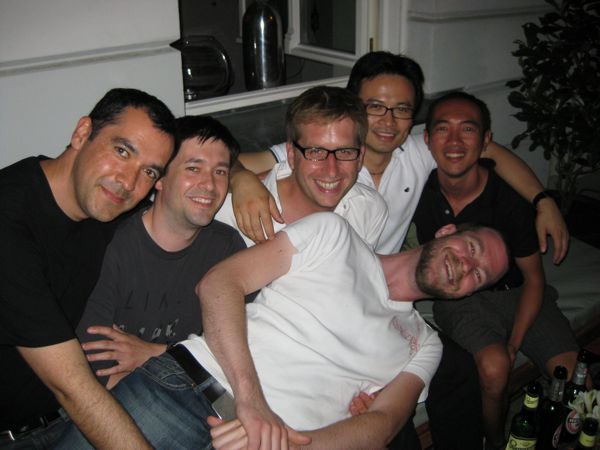 How did the idea come about to start this night in Berlin?

A very small group of English and American friends (led by me, Robby Block and Desmond Tumulty) used to meet on Wednesday nights at Marietta, a neighborhood café in Prenzlauer Berg that draws a gay crowd one night a week. It’s full of cute neighborhood guys, but it’s also impenetrable and intimidating. During a year of hanging out there, we hardly met anyone — and I’d say we have pretty well-developed social skills.

We then changed bars and Desmond started casually calling it our weekly “Queer Beer.” We still weren’t meeting people and we continued kvetching about how difficult it is to make connections in German society. We constantly joke that the Germans are “socially autistic.” It is bad to make sweeping generalizations about other cultures, but there is a certain amount of truth in them.

At some point in 2008, I said we should stop bitching and take charge of the situation by starting our own weekly event. The joke was that we could use it to meet Germans on our own terms. On Jan. 18, 2009, QBT was born at Perle Bar in Prenzlauer Berg.

I found the party on Couchsurfing. How do you promote it and what’s the general audience? 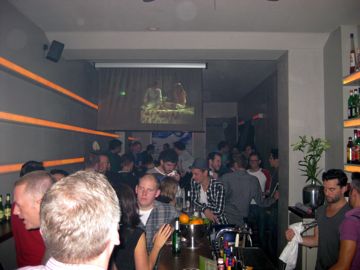 We promote the party mostly on Facebook, but also on expat Web sites like ToyTown Germany, which is an excellent resource for people living here, and Gayromeo, the local gay dating site. Robby, Desmond and I also advertise in Berlin’s monthly gay magazine Siegessäule, which is important for drawing tourists. One Swedish guy found the ad last spring and has been back to Berlin three times since and is now moving here.

In terms of the general audience: Anyone who is queer or loves to hang out with them is welcome. Queer is such a great word because it is all-encompassing and also has “punk” associations. It allows you to avoid the LGBT bullshit, which sounds like a chicken’s innards. You can say “queer” and not worry about offending anyone.

The three of us who started QBT are all long-term residents of Germany. I’ve been here almost nine years and Robby and Desmond have been here similarly long. So from that starting point, it was really important to us that this not be a bitch fest for whining about Germany — that’s just too cheap and easy. And we also want it to be clear that Germans are not only welcome, but also highly desired. We don’t want to create any kind of “parallel society” with this event — we just want to be able to speak English one night a week and experience a bit of home.

When we began, we kind of figured it would be 90 percent Americans and Brits. Instead of becoming an Anglo-American ghetto, though, it has become a truly international event. We get lots of gays from other EU countries, especially in the east, Russia, Turkey, some from Asia as well as the Americans, Canadians, Australians and Brits. An increasing number of German guys and gals are also coming, which shakes things up in a great way. We’re also starting to get Erasmus students from other European countries.

We have bartenders who come and we have English teachers, translators, professors, tv personalities, media types and diplomats. The only rule is that we detest snobbery in any form. You can be critical if you come and you don’t have to be salt of the earth, but you do have to be open-minded, friendly and have a modicum of social skills.

Your night feels more like a popular party or a hangout, rather than a crazy all-nighter. Was that by design? 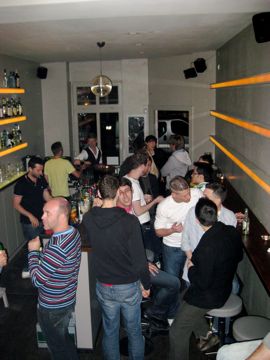 Back in the heyday of gay Berlin in the 1920s, Christopher Isherwood used to hang out at a working class bar called the “Cozy Corner.” I would like to think that we offer a cozy corner, a place where people can turn up once a week and hang out and speak English with other people from different cultures.

We also deliberately avoided the German term “Stammtisch” for weekly gatherings because, for the most part, QBT is completely anti-intellectual. We didn’t want to have yet another venue where you can lament the war in Afghanistan or climate change. It’s a place where you can meet people, drink enough beers to behave absurdly and also drop your pants if you’re lucky enough.

What’s up with that drag party that people were going to after yours?

Chantal. So many stories, I wouldn’t know where to begin. But having Chantal’s House of Shame gives us a place to send the kids when we’re done partying on Thursday nights.

Do you have any tips for what are the current “hot” places in Berlin right now on the gay scene?

The most famous club in Berlin and perhaps that world right now is Berghain in Friedrichshain. But if beats per minute or aggressive door policies are not your thing, then it will be hell for you without drugs. Skip it.

I think it’s safe to say that, after Chantal’s House of Shame, the QBT crowd gives its strongest endorsement to Schwuz in Kreuzberg. Schwuz is sort of like a gay community center/nightclub, but also very cool. Like QBT, it draws a very diverse crowd — at least in terms of age. It’s very friendly and always fun, with its themed parties.

There are French nights frequently and Madonna- and Kylie-Mania parties. Irrenhaus (Insane Asylum) at Geburtstagsklub is also a favorite – it’s also hosted by a drag queen, Nina Queer.

How big is the gay expat scene in Berlin? Is it growing? 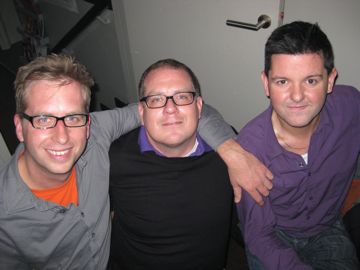 Berlin is one of the world’s gay capitals. The word “expat” always conjures up images of Americans and Brits. The image should be a lot bigger, though.There are so many Eastern Europeans and Russians in Berlin, SOME OF WHOM are escaping cultures that are incredibly repressive towards gays. If you add Eastern Europe to your view of what it is to be “expat,” then the population in Berlin is huge.

What would you say to the person who might be intimidated to go to the party by themselves?

We try to look out for new arrivals, but it is getting admittedly harder because the crowd is growing. All you need to do is ask the barkeepers about QBT. We have two sweet and very sexy bartenders — Roberto and Andreas — who are pretty vigilant about informing the QBT organizers (the “queen bees”) about newcomers who are here for the party.

I haven’t heard of many parties like this. Do others exist?

It is important for us to admit that we are not the first. Munich has a monthly gay expat event that has existed for a while, and there are probably a lot of other places with similar parties. We had a guy visit from Lyon, France last summer who wants to start his own. This idea is in the public domain and we encourage others to jump on the QBT bandwagon.

The party is held every Thursday at Perle Bar, Sredzkistrasse 64 in Prenzlauer Berg, Berlin, Germany. Join the Facebook page or check out more information at Toytown.

Gay and worldly? Give an eyeball to ten of the world’s farthest flung gay bars. Fans of Berlin, be sure to check out a photo tour of Berlin 20 years after the wall’s fall and a great rundown of places to chow down in a hurry.

Tagged
Restaurants + Bars LGBTQ Travel
What did you think of this story?
Meh
Good
Awesome

There are only 15 lesbian bars left in the US, and this new campaign is out to save them

The best warm-weather getaways for LGBTQ Americans this winter

11 LGBTQ businesses in the US to support this holiday season

The most uplifting LGBTQ stories from 2020 worth celebrating