At just under 10 minutes long, this short addresses many issues, and whether it makes you uncomfortable or makes you laugh or both, it’s sure to make you think.

In a recent interview with the artist, here is what she had to say about the work:

KS: Was this idea specifically inspired by the Inauguration of Obama or was this idea bouncing around prior? 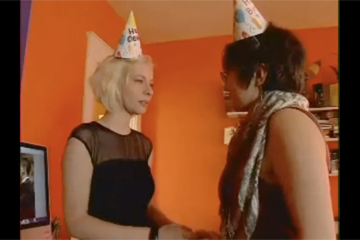 Blanche (played by Swisher) confronts her partner
with a revelation.

PS: The idea for “Blanche is the New Black” was specifically inspired by the Inauguration, although I had been wanting to do something on the issue of race for a while. I actually went to a mostly black club that night and was the only white girl there, and had a total blast. Everyone was so happy and accepting. Then, the idea came to me.

KS: What was your reaction when you heard people saying “Racism is over in America?”

PS: I thought it was a total farce that the media was saying “Racism is over” because of Obama. If anything, his election brought out the racism in so many people. Blanche is an example of someone who accepts the President being black, but is oblivious to her own conditioned, stereotypical views of black people.

KS: Your role could be seen as pretty embarrassing. Do you feel like you showed your ass? If not, whose ass(es) did you show?

PS: Haha! I didn’t think it was embarrassing at all. It was a lot of fun. I actually really like the character of Blanche. You have to in order to laugh at her ridiculousness. She is a part of me, just as the other characters are a part of me, but she is definitely the most absurd, and I exaggerated that absurdity. On election night, I remember thinking to myself, “Wow, I can’t believe all these black people actually like me!” which, if you think about it, is pretty silly.

So, in that sense, I do feel like I showed my ass, but it was because I mooned you.

KS: This is a piece that plays on “coming out.” Your character is partnered with a woman, though there is no direct commentary about that in the movie, and the other characters accept the relationship (and lots of other stuff) without commenting on it directly. Are you speaking to gay activism and gay civil rights with this piece? 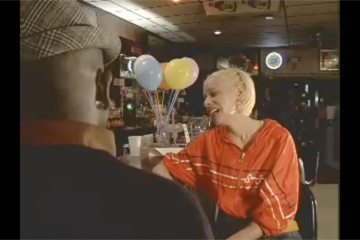 Blanche tries her new identity on for size in a local bar.

PS: I am, in a way. I would love to have my homosexuality simply accepted. I think it is a topic that needs to be explored, and in the revised “Blanche is the New Black” it is addressed. But, for the YouTube version, I thought it would be new and fresh to just have the gay issue moved into a space where it really isn’t that big of a deal, as I hope it will be. My life is filled with black and white people who are supportive of ALL civil rights. It is the little person and the transgender who really need civil rights activism. Now, THAT is a parade or march that I would like to add to the list.

KS: I laughed pretty hard when I watched this. I think the piece is pretty brave. It could be taken the wrong way. If someone says this piece is racist, how would you react?

PS: So far, that hasn’t happened yet. And you never know how you are going to react to something, but I would probably say something about how humor is my favorite way to bring difficult issues up.

Pam’s current goal is to get ‘Blanche is the New Black’ seen in all 50 States, so leave some comments at her YouTube channel and let her know where you are. I’m sure that other countries are an extra bonus.

Interested in reading thoughts of everyday people on racism? Check out the links in this post on International Blog Against Racism Week.

What do you think about Blanche is the New Black? Share your opinions to generate conversation as a comment below.