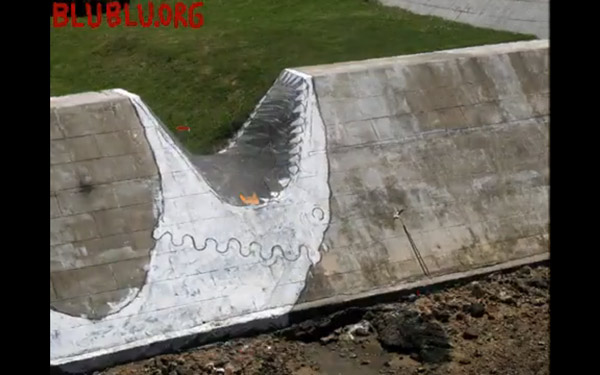 One enormous creature from BIG BANG BIG BOOM by Blu

When researching Buenos Aires before moving here, one of the things that set me off with anticipation was seeing Muto by Italian artist Blu.

I knew it was made in Buenos Aires and it was inspiring on such a grand scale, it made me sure awesome things were happening here.

Now he’s done it again with “BIG BANG BIG BOOM: an unscientific point of view on the beginning and evolution of life … and how it could probably end” featuring a soundtrack by Andrea Martignoni matching the enormous scale of the building-sized animations that incorporate the real world measure for measure.

Filmed in Argentina and Uruguay, loads of local artists collaborated in the execution including those from RunDon’tWalk, and bs as stencil.

Blu apologizes for the video quality on his blog saying, “it should be seen on bigger screens with good speakers.” Though it’s more than impressive, I’m inclined to agree and hope to see it on a big screen here sometime soon. Full resolution would be mind bending.

Intrigued? See the work of some of Blu’s Buenos Aires contemporaries in Graffiti Mundo: Street Art for the People in Buenos Aires.