THIS IS HOLLYWOOD. Where are the Gucci skanks?

Three giant, pulsating rooms are packed, but the leggy, bling-y members of Hollywood’s most populous girl-tribe are nowhere to be found. I have entered a new age in Los Angeles club culture, the Dork Age.

Gucci Skank, n., A tan Los Angeles female who combines tacky Gucci clothing with hard alcohol and sudden fits of promiscuity. At clubs she garners interest by behaving spastically, grinding on your boyfriend then blacking out. 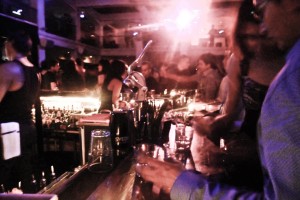 At Boulevard3, guys outnumber girls three to one. They are an ethnically diverse crew of masters candidates with outdated blazers and bright futures: engineers and students of corporate law. They are perfectly nice, dreary people who operate with little apparent sleaze or malice.

They would make any girl happy, any girl with a checklist that does not include insane passion. Given the frumpy vintage dresses gyrating around me, this crowd is full of perfect couples waiting to happen.

Like their savage, dive bar cousins, Dork Age males are pack animals. This eager-beaver breed is marked by textbook brilliance, it seems, at the expense of daring.

They engage Jessica and I in wing-man pairs for twenty minutes at a time.

Chad, 22, Chinese, is the guy who developed the thing that will save the power grid if a Tsunami hits New York City.

The quiet one says nothing.

The quiet one is so nice, we think.

Twenty minutes pass and we are all nodding at each other.

It felt like a multicultural job fair with a Top-40 soundtrack. People were fascinated and curious about what we did for a living but too stand-offish to ask for a phone number or make-out. 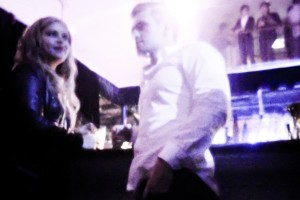 Justin Witt, 24, interacts with a woman at a comfortable distance at Boulevard3 in Los Angeles. Photo by Tracy Tran

This is a club without Gucci skanks. It’s a lustless room. No one believes the songs are played for them. Everybody’s hook-up-o-meter strays off. We start a game of cool wherein sophistication loses its allure and becomes a barrier — a barrier that even Bhangra, the world’s most inviting rite of spring, could not penetrate.

When a posse of Punjabi lawyers encircles the dance floor, signaling the rest of us to end the night with a Bollywood style dance-off, the once chipper crowd becomes really absorbed in their phones.

Despite gobs of insightful career advice, the Dork Age is a bummer in the most southern California sense of the word, because we were all well-meaning, good-looking people teetering on the edge of a good time, dying for a little push. Because a neon green Tokyo tea at Boulevard3 brings-on a sweet, hormonal drunk that makes a phone number fall like a feather from uptight, under-glossed lips.

Loop from Boston to California and back on the ultimate US train trip When we travel again, don’t all rush to the first place that will take you The days of US passport dominance may be over 17 things you didn’t know about the Cook Islands 20 of the funniest idioms for people learning English