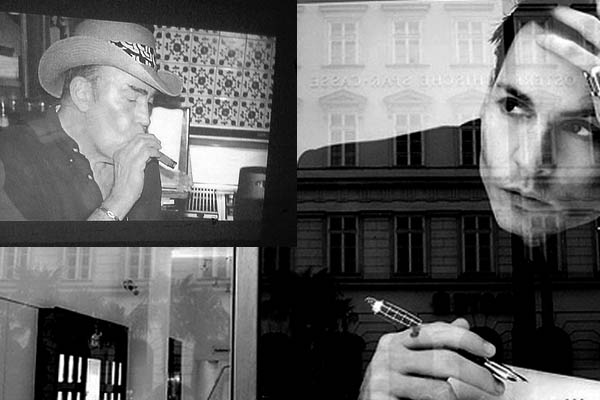 This is the first in a series we hope you will want to contribute to. Please follow the link at the end of this post to find out how.

I was a chubby just 21 year old art student with a mohawk and a love for gin the night of the The Hunter S. Thompson Tribute in Memorial Auditorium. I went with my mom. Behind us sat my psychiatrist who I secretly despised, cuddling with his wife in a way that disgusted me. I was surprised to see him there. On stage were Hunter Thompson and a strange group of people there to honor him including, if memory serves, his wheelchair-bound mother, Warren Zevon, and Johnny Depp.

Thomspson wore a hat with ear flaps. Ron Whitehead, the poet and MC was playing up their connection in front of a packed house, his skinny body bending and swerving as he speed-read his poems with an enthusiasm normally reserved for 16 year olds losing their virginity. Thompson drunkenly hollered, “Slow down! Slow down!” It was obvious he was blitzed from the moment he walked on stage and by the end of the night he was barely able to make himself understood. My shrink and his wife clutched at each other, stroking, comforting, terrorized. This satisfied and repelled me.

Thompson was accompanied by Johnny Depp. It was the period before the release of Fear and Loathing in Las Vegas (the movie) during which Depp was observing Thompson for maximum fidelity.

After the show, I buckled myself into a mauve sedan with some other photography students and we sped through the streets on our way to the Bristol. “Everybody’s going there!” said Cathy.

At a table in the Bristol sat a very old Raoul Duke, packed in by fans and more than one gorgeous woman he seemed to be ignoring in his stupor. I ordered a gin and tonic and hung back a minute before approaching the table to get the program from the show signed for my mother. He seemed small and frail and his glasses magnified his large, watery eyes in the wobbly candle light. Something about him reminded me of a frightened rabbit.

“My mom just loves you. She got me to read Fear and Loathing when I was twelve.”

“You look like a victim of domestic violence,” Thompson growled at me.

“Oh, lighten up, honey. It’s a joke.” He scrawled something on the program that covered the entire page and was completely illegible.

“Thanks,” I said. Dismissed.

My friends were sticking around, but I could walk home from there. Another drink might have been nice, but I didn’t have the cash. I sucked the rest of my cocktail up through its tiny straw, and once on the sidewalk in front, alone, I let a monster belch reverberate into the cold night air on the empty street. To my left I heard someone say, “Nice one.” I looked. Johnny Depp was standing in the shadows, smiling.

“One too many gin and tonics,” I said.

“I know the feeling.”

Holy shit, I thought. Then I walked home by myself thinking of domestic violence.

We want your story. Did you wait on Jenny McCarthy in the Bahamas? Did you sit next to Danny Glover on a plane? You don’t have to be a writer, and you can still be paid. See the newest post from the editor for more details.

What did you think of this article?
Meh
Good
Awesome
Bookmark
Posted In
Narrative Humor