View all travel news
Top Destinations
Top CitiesView All Destinations
Trending Regions
Trending Cities
Load More
We gave Tom Gates 24 hours to eat as much as he could stomach in Buenos Aires. The results proved him just as gluttonous as with his past excursions in Berlin and Bangkok . 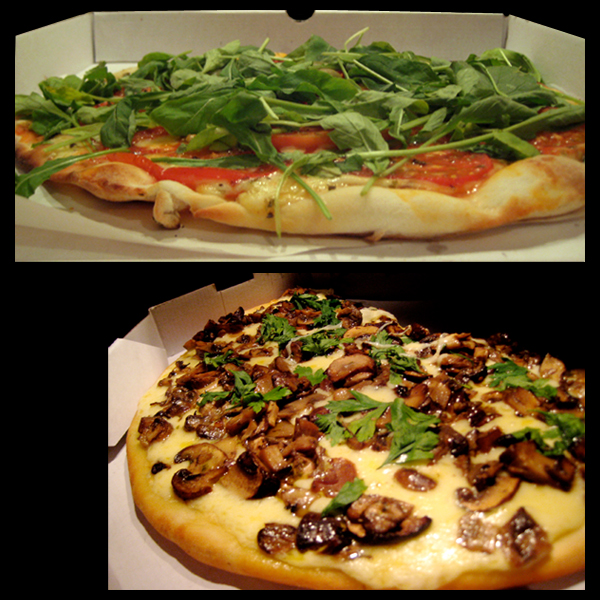 For the first time, my adventure started at night (it is Buenos Aires, after all). Pizza seemed fitting given that I’d pissed quite a few Argentines off with my previous take on how many people in the world screw up a food that is God’s gift. I ordered take-out from two recommended joints and scrammed home to examine what was inside of the two boxes.

Posto Pizza’s Hongos Blanco pie (three kinds of mushrooms) was frigging delicious. It had a bit of a tart taste given the involvement of Portobello shrooms but it worked. I ate three slices before moving on, only abandoning it out of my duty to chomp its mozza-brother sitting nearby.

The second pizza, a Napolitana con Rucala, came from Bakano’s location in Barrio Norte. Their (very attractive) staff seemed wildly confused that I ordered it while holding a box from another restaurant. More of a thin crust boutique-y affair, it was delicious. I housed it in minutes. Just the right amount of crust, cheese and greenery. Pretty too look at, pretty to eat.

Impression: Standing corrected. There is some good pizza in Buenos Aires. Mood: Dreaming about tomorrow. 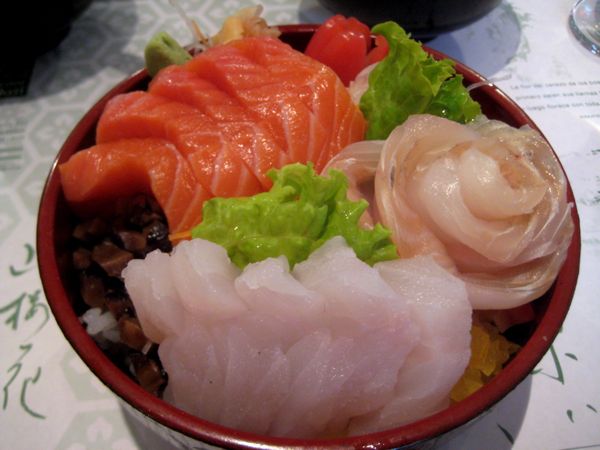 I met up with Nights co-editor Kate Sedgwick at Nikkai, a Japanese restaurant housed in the same building as the Asociacion Japonesa. Note: don’t push the door until you almost break it. It’s a slider, not a puller.

Kate made poor decisions and ordered something curry-like. I knew that there would only be one thing I’d be ordering – the chirasi (a damn good bargain at 57 pesos, given the amount of fish).

When it came I knew that I’d made the right decision. Loads of fresh fish done up all pretty (one even looked like a rose), heaped over sushi rice, chopped mushrooms and plenty of other japanese vegetables. My only lament was as it always in Buenos Aires; an extreme lack of tuna. It’s just not done here. This did not detract at all from the fact that I was left lapping sushi rice from a little green bowl, like some starved, homeless dog.

Impression: Still my favorite Japanese in Buenos Aires and one of my favorites in the world, if for no other reason that it feels like some back alley restaurant that Gremlins would live in. Mood: Fishy burps. 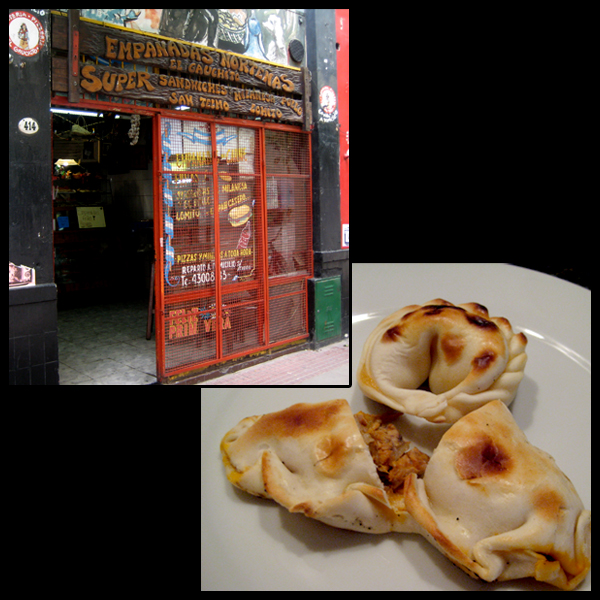 I left Kate looking at her bus time table book, as she does most hours of the day. I hiked it a few blocks down to grab a couple of empanadas from an old favorite, El Gauchito. It’s really just a counter inside of a door, with hundreds of different empanadas staring you in the face.

I ordered one pollo and another one that looked hammy. The two ladies behind the counter pretended to leave the room as I scarfed them at the tiny counter but I know they both watched and judged secretly. I ordered two more to go, hoping that they’d keep for a day in the fridge. I don’t get to San Telmo often but when I do, this is ritual.

Impression: Good, cheap empanadas. Mood: Lethargic and wondering how much more of this I can do. 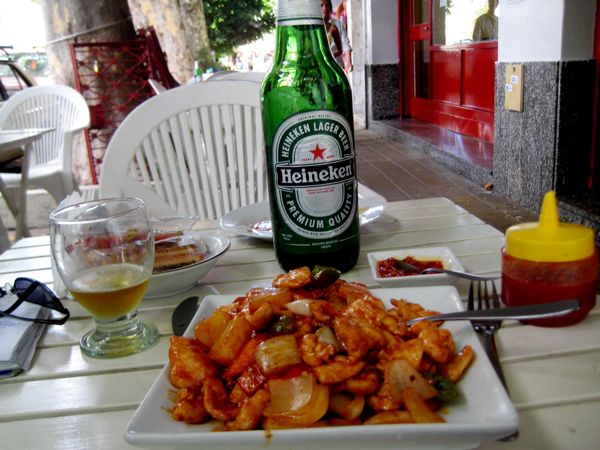 I tripped to Barrio Chino (Chinatown) after reading Hal Amen’s quiet rave in Matador’s piece about our favorite Buenos Aires spots. The area is about six square blocks and much more manageable than those C-towns of New York and San Francisco. It was still just as lively, with hoards of locals and tourist clammoring down the streets filled with restaurants, supply stores and trinket shops.

I ignored my never-ending urge for Thai food and found a table outside of El Cisno Blanco, a cute restaurant about a block out of the main fray. It was late afternoon and I was the only customer, doted on by a lovely woman who helped me through the menu. I figured that this was also a great opportunity to order a big, honking cerveza.

Six small wontons went down great with the beer – all homemade. The piled-high Pollo Saltado c/Anana (Pineapple Chicken) came next and was the best Chinese food I’d eaten all year. Every element was fresh and the dish felt labored over, much more so than a normal rush-job meal you’d get a similar place back home. The whole thing ran about 50 pesos. 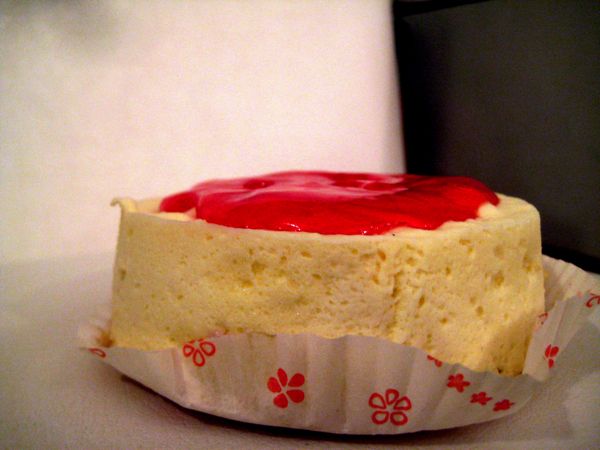 Impression: Loads of homemade cakes and pies to choose from. Great little bakery. Mood: Distended. Taking a break and waiting for the main event in a few hours. 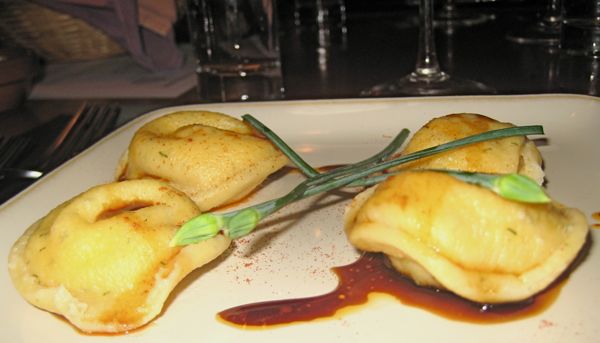 It’s not worthy of SaltShaker to be thrown at the end of a day like this but I’ve wanted to take a seat at this oft-mentioned closed-door restaurant for a year. Like many, I’d used Dan’s blog as the basis for most of my eating decisions while in Buenos Aires and he’s never steered me wrong. I wanted to see what he’d cook up.

Dan and host Henry greet each of the guests (10 maximum) with smiles and usher in conversation, bringing together strangers in a way that feels neither heavy-handed nor understated. Within minutes we were given a strawberry infused vodka cocktail that went down quick and easy. Fruity yet not sweet, a perfect summer starter.

Each meal here is based on a historical (“or hysterical”) cue. Today’s menu was inspired by the re-unification of The Ukraine, something that nobody present seemed to know much about. It did allow for a jumping-off point when working out the the recipes on the menu, all of which had some basis in the food of that region.

We sat down at the dining room table (kind of like being at your stylish and well-read rich aunt’s house) and spent two hours eating and drinking. Wine pairings rolled along with each dish presented, all of it explained by Dan, who spent equal time socializing and cooking.

The food that followed was wowzers. Vegetarian caviar (on homemade rye toast) was followed by a chilled, surgery-red beet soup. Pasta dumplings filled with boingy cheese came next, spiced up with a fiery soy and chili sauce (pictured). Duck Kiev finished the theme out, complete with a homemade sour cream dip. Dessert was orgasm city, pretty much designed for what gets me off: A tart made with raspberry and almond. Gahhhhhhhhhhhhhhhhhhhh.

Not a minute of the evening felt highfalutin, even if it was designed as such an occasion. Henry and I both cracked up when I picked the wrong spoon for my soup – this is not a place of judgement.

Casa SaltShaker is more than a restaurant. It’s an elevating culinary and social event, one that made me feel bouncy and smiley as I walked out the door. I don’t think I’ll ever see or taste anything quite like the place again.

Impression: A happy place. Mood: Bliss with a distended gut.

Matador has Buenos Aires Covered. Be sure to check BsAs articles on everything from urban volunteering to surviving as a vegetarian to one of the world’s best Monday night parties.