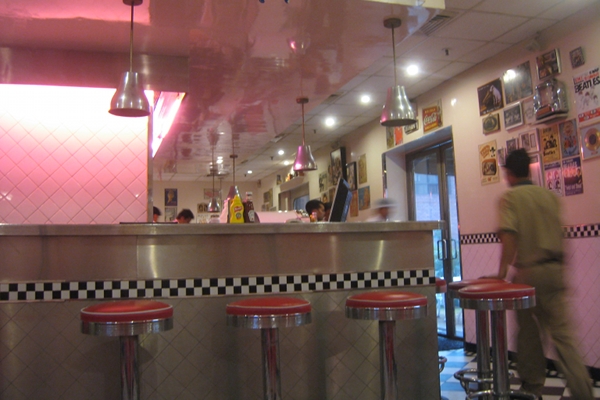 Inside the diner in Delhi. Photo and feature by the author.

Can eating at an American-style diner in Delhi really make you feel at home?

Living in Denmark for more than two years and only visiting the U.S. once since I left, has made homesickness a fierce opponent. It’s caused me to gently sob when I hear Springsteen and buy imported Betty Crocker brownie mixes for $8, just to feel a little closer to home.

Touring New Delhi last month, the least authentic Indian dining options showed up on my homesick tourist radar. Several restaurants in Delhi, perhaps specifically catering to transients like me who end up on the complete opposite side of the world from where we once began, offer not only American burgers and fries but an overall classic American diner experience.

While the Big Chill restaurant in Delhi’s Khan Market does offer a particular aesthetic, decked out with Hitchcock posters and a menu filled with American-style pizzas and pastas, grainy chocolate malts, and blueberry cheesecake, I opted to eat at the All American Diner — twice. 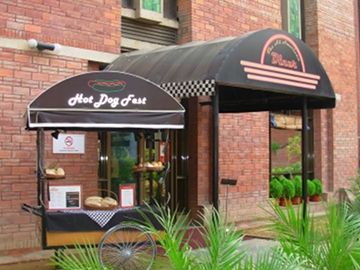 Tucked between looming buildings in the India Habitat Center, this small, unassuming Steak ‘n’ Shake-esque diner has a Wurlitzer jukebox packed with Elvis and the Big Bopper and breakfast menu full of pancakes and omelets at India prices to sate any out of place Denny’s lover’s cravings.

Red vinyl booths line the walls, and the only telltale signs that I wasn’t home were the Indian customers and a white little girl wearing a bindi, hand-sewn Indian-style shoes, and an Western-style pink frilly dress, spinning furiously on a stool at the counter next to her tourist mother. Never seeing another Westerner, I wondered if my fellow Indian diners were wistful businessmen or locals who happen to like kitsch.

Sliding into one of the booths, my glass of filtered water — in Delhi, never tap — was placed on the type of sturdy cardboard coasters I’d once learned to flip from the edge of the bar, a way to pass the time while stuck in an uneventful pub. Little authentic touches were everywhere, like the French’s mustard and Heinz ketchup next to the steel, upright napkin dispenser on every table. The white walls, adorned with old soda advertisements and Marilyn Monroe clocks, met the black-and-white checkered floor that was just slick enough to shine. Even the nauseating fluorescent lights that lit the L-shaped room seemed like an intentional attempt at authenticity. 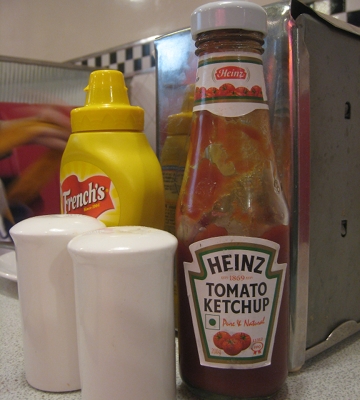 Classic Heinz. Photo by the author.

With an Aussie pal on our first visit, we ordered what we both considered classics, a Coke float and a Belgian waffle sundae with strawberry and vanilla ice cream respectively. I poured strawberry syrup over my crispy waffle quadrants, fighting the familiar stickiness of the metal and glass syrup dispenser slowed by years of exposure to corn syrup and artificial dyes.

As a rendition of “Afternoon Delight” played softly, we engaged in a lengthy discussion about our parents’ 8-track collections and our love of Billy Joel’s maudlin working-class music. Bonding has never been so gooey and sweet.

Heading back with an American pal days later, we marveled at the selection of appetizers and desserts — onion rings and fried mozzarella sticks; chocolate silk pie and peach cobbler with ice cream — before ordering dinner. My vanilla milkshake was gone before my food arrived, icy goodness chilled to perfection, and my chili bean burger — with a side of flaky golden brown potato wedges — brought back memories of warm Sloppy Joes from a state fair. 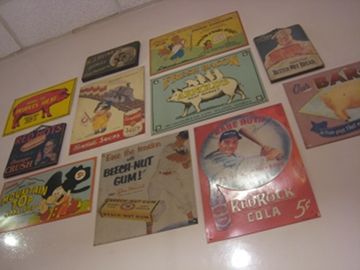 American signage. Photo by the author.

My companion’s vegetable omelet came out baked to perfection with a side of buttered toast and Welch’s grape jelly in those little plastic and foil packets. All told, tip included, we spent a few more than 400 rupees, not even $10.

While some of the specialties like mushrooms on toast seem a bit beyond the standard American diner fare, they are well worth sampling. Best of all was the Key Lime Pie, simply advertised as “lime” but reminiscent of the best southern Florida has to offer. And a mango, honey, and chai milkshake is also a suitable compromise if you’ve somehow stumbled into the ’50s-style diner hoping to find Indian comfort food.

Getting up to waddle out, food coma setting in, I announced to our waiter, “Just like home!” He gave me a blank stare and muttered “Yes ma’am,” wholly unimpressed. Some things just don’t translate.

While you’re in town, you can always try your hand at some Urban Volunteering: Delhi. If you’re still hungry, there’s always International Cow: 50 of the Most Amazing Burger Joints in the World.

Tagged
Restaurants + Bars Delhi, India
What did you think of this story?
Meh
Good
Awesome

The world honors the dead with food and drinks. Here’s what they give.
The 10 desserts you need to try in Greece that aren’t baklava
10 traditional Finnish foods from the happiest country in the world
In the South, pineapple is a welcome addition to Thanksgiving dinner
13 traditional Cuban foods more authentic than a Cuban sandwich

How to stuff your face in Delhi, India

25 signs you were born and raised in India

10 signs you were born and raised in Delhi

Notes on re-living the past in Delhi

These famous barbecue regions are the focus of Netflix’s new ‘Chef’s Table: BBQ’

New England beach pizza is the sweet, saucy style everyone needs to try