03:28 Jul 29, 2021
View all travel news
Top Regions
Top CitiesView All Destinations
Trending Regions
Trending Cities
Load More
Cyrus Moussavi, the founder of Raw Music International, talks about how he got started digging up some of the world’s most interesting, yet virtually unknown music communities.

GREGORY ISAACS may have ruined my life. It was his song, a sweet reggae croon about a private secretary who knows just what the boss needs, that led me down a chaotic path toward the CD vendor’s stall in the central market in Kisumu, Kenya.

I was 20. I’d just landed in that hectic port town, had never been to Africa, and was surprised to hear a reggae song I knew so well blaring through a market.

I arrived at the CD stall right after an ill-advised meal of curry that would soon give way to a digestive Blitzkrieg — but for the moment, I introduced myself to the young kid playing Isaacs.

As it turned out, the Isaacs song wasn’t a one-off. Reggae is massive in Kenya, as it is throughout much of Africa. The kid sold me some burned CDs and directed me to a nightclub, “The Basement,” where I could hear more.

That night, after the curry wore off, I wandered through a haze of bass and smoke watching people dance like nothing I’d seen in New York. 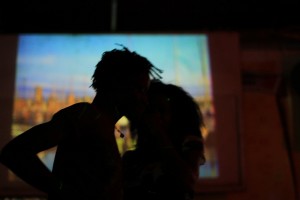 Ozzy and Emma, dancing late-night at Tammiez Club in Kisumu.

I thought about how I could document this scene — how to show my friends back home this joyous, exciting, slightly dangerous, dynamic side of Kenya. I thought of a TV show shot in clubs around the world, documenting scenes like this and telling the stories of foreign places through music and the people who make it.

At that moment a familiar one-drop kicked in. The DJ was playing Isaacs’ classic “Night Nurse.” My fate was sealed. Three years later I was back in Kisumu to film the first episode of Raw Music International, the TV show I imagined that night at the Basement club. I was still in touch with the DJ from that night, a music fiend/herbal entrepreneur who goes by the name Ranking T, and he was taking me deep into an insular and incredible Kenyan reggae scene.

Reggae first appeared in Kenya with the great Bob Marley, broadcast over the BBC’s Kenya branch, KBC Radio. There has always been protest music in Kenya. Even ancient tribal music took on veiled anti-colonial overtones during the British occupation. But reggae was far more overt. These guys were speaking in English about tearing down the system, overcoming oppression, rising out of the slums, and smoking a hellacious amount of green along the way.

The music and message were revelatory. Many of the early Rastas, now in their late 30s and 40s, have reggae “awakening” stories bordering on the verge of biblical. Don Carlos, Lucky Dube, Burning Spear, and the great Bob himself seemed to be speaking directly to the people of Kenya’s slums, telling them to keep hope, smoke dope, and chant down Babylon system. 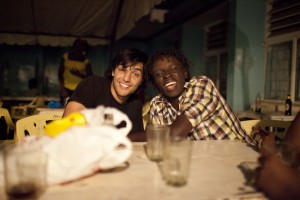 Naturally, Kenya’s repressive Moi regime wasn’t too happy about the kids growing their hair out and attacking the government and its “crazy baldheads” (Which sounds a lot like the US in the 60s). But the Rastas continued on, making music and putting on underground shows in the face of jail time, beatings, and social stigma.

These days, things have calmed down. The government is much more tolerant and the people have embraced the sound and message. Reggae has become the music of the slums; you hear it everywhere. Still, the Rastas’ (admittedly vague) mission hasn’t been fulfilled. Today they pack clubs until the morning hours and make protest songs about everything from government corruption to tribal prejudice to the need to plant more trees — and not the smokeable kind. (Listen here.)

And while reggae is still potent and powerful music throughout Kenya, the youngest generation has largely replaced Bob with Biggie. It seems like rap is taking over much of the work (and criticism) reggae shouldered in the 80s and 90s. It’s popular but the offensive, explicit nature means not everyone can get behind it. But the young kids speak about it like the older rastas speak about reggae. “When we heard Nas and Tupac rapping about slums in Queens and LA, we thought they could be talking about Kisumu or Nairobi,” the Kenyan rapper LaFam once told me. 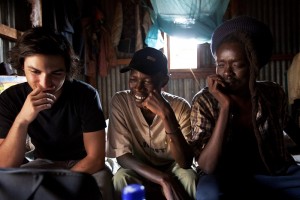 These are the kinds of stories I want Raw Music International to tell: music presented with a background, with humanity, and a way to get a deep and nuanced understanding of a foreign place through a medium we all understand. Please follow along with us as we put together our first season of episodes, and be sure to check out our first mixtape of Kenyan reggae jams. As for the artists we met, here are a few outtakes from our pilot episode…

Tagged
Travel Kenya
What did you think of this story?
Meh
Good
Awesome

I traveled to South Africa during Omicron. This is what it was like.
The most scenic and luxurious train rides in the world, according to the Man in Seat 61
The 22 places you need to travel in 2022
11 of the deadliest concert disasters in recent history
The best Airbnbs in Nashville for a bachelorette getaway