My friend Chad and I went out looking for a good time tonight and stumbled into a full scale performance already underway. If tonight is any indication, the drag scene in Quito, though tiny, has developed as traditional theatre. This was no lip syncing celebration of fabulousness and vanity. This was something completely different than anything I’ve ever seen.

We got dropped off by the cab in a desolate street — the neighborhood is dead quiet at night. We asked the cabbie to wait to make sure we got in. From the outside, it wasn’t clear that the bar was even open. We got buzzed in, and were abruptly incorporated into Daniel Moreno’s show.

In character as Yvonne, Moreno greeted us with backhanded compliments and a larger than life persona, ordered our drinks in front of the crowd, made a big deal of seating us and serving us crackers with a special maricál sauce (explaining it was named for its seafood ingredients). We were cracking up.

Even Chad, whose Spanish is worse than my Japanese, got enough of the spirit of the performance to let out some gut laughs.

Drag is a universal language, after all. And an expert drag queen knows how to simultaneously flatter and humiliate her subjects, to captivate a room and own it. 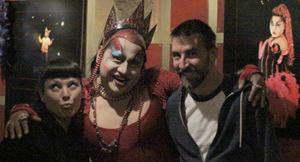 Me, Moreno, and Chad

As Yvonne, Moreno was holding court, delivering a monologue fit for a standup comedy show about the difference between being a drag queen and being transgendered. With impeccable timing, she got right back into the flow of her performance which we’d ignorantly interrupted.

At Dionisios, it’s about theatre, and you’d best get there on time, which, it turns out, is about 9PM. Used to drag shows in the US, it took us a few minutes to realize we’d interrupted a production that was already well underway.

Moments later, Yvonne was onstage, crying real tears about (spoiler alert) the death of her mother, the news delivered by a phone call. She stormed out of the front door of the bar in a fit of despondence over her mother’s death. Inside, we could hear her desperate cries for a taxi. But the show wasn’t over yet.

Moments later, sans tiara, she was onstage again, delivering an emotional wrap-up to the show. It was so wraught that I was ashamed to bust out my camera and snap a couple photos. I have never felt like my camera might not be appropriate at a drag show until tonight.

I have been to drag shows all over, but I’ve never seen anything like what I saw at Dionisios. The drag scene in Quito, consisting of this single bar, seems to be full of spirit and unique and wonderful. Chad and I left with glitter all over our faces from drag queen kisses, promising to return tomorrow to catch the show in its entirety. Moreno has agreed an interview, and I hope to have more to report soon about the vibrant, tiny drag scene here in Quito, Ecuador.

Tagged
Travel Insider Guides Quito, Ecuador
What did you think of this story?
Meh
Good
Awesome

9 Must-Have Experiences on a Trip To Quito

16 Things To Do To Claim You've Visited Quito

Habitat III: Thoughts on ‘the Right of the City’

10 Places Where You Will Feel Absolutely Dwarfed by Nature