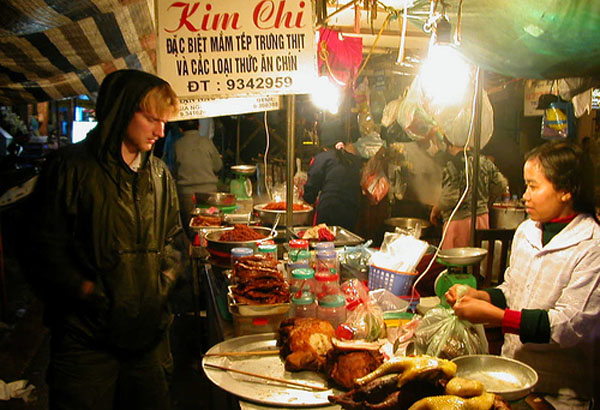 Photo of meats to baffle the tourist on display in Hanoi: Jed Sundwall

Vietnam’s been on the tourist radar for about a decade now, thanks to its amiable climate, hospitable people and fantastic cuisine. Delicious as they may be pho and banh mi start to feel like they lack substance after a while. If you’re in need of something heartier, it might be time to eat a live cobra heart. 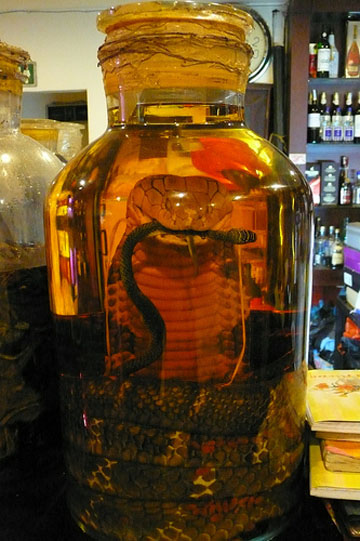 Photo (and feature photo) of cobra liquor
on offer in Vietnam: Augapfel

Munching on cobra parts is likely an adaptation of the Chinese medical belief that ingesting an animal will endow the eater with its positive attributes. This is why tiger penises are so expensive nowadays, and no, I’m not kidding.

The ritual is primarily a northern Vietnamese thing and tends to be far more elaborate around Hanoi. Snake restaurants rarely advertise to foreigners, but ask any tour guide in the Old Quarter and they’ll be able to point you in the right direction.

It’s possible to find cobra in the south, but it’s mainly in the form of carcasses pickled in rice liquor and trust me, the novelty factor does not make up for the taste. Your best bet for strange eats in Saigon is the Jungle Barbecue (Lang Nuong Nam Bo, off Cach Mang Thang 8). They usually use smaller, non-venomous snakes, but you’ll also be able to order up plates of porcupine, iguana, weasel and other things you’ve never even thought about eating. Be sure to call ahead and reserve your dinner. 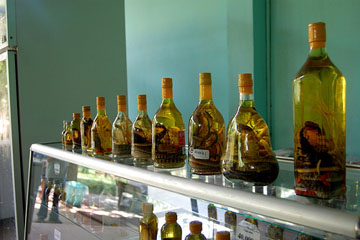 Photo or an array of powerful liquors: ashleyt

When you first arrive at the restaurant you’ll be ushered into a large room full of terrariums and wire cages. Don’t let the rabbits, dogs or turtles distract you – they’re delicious, but you can eat dog anywhere.

When picking a cobra it’s tempting to go with the longest one, but what you’re really after here is girth and attitude. When you’ve selected the tastiest looking snake the host will pull it out of the cage, throw it on the floor and start poking it with a stick. If it starts hissing like a punctured tire and tries to kill everyone in the room, you’re good to go.

After taking a seat (preferably away from the cobra) you’ll be offered a choice of fine apertifs. You’ll be able to choose from a large array of dead things in rice liquor – scorpions, lizards, other snakes – but as this meal is all about strength and virility, I’d suggest you go with the bull testicles. Slightly sweet, but with a savory edge. 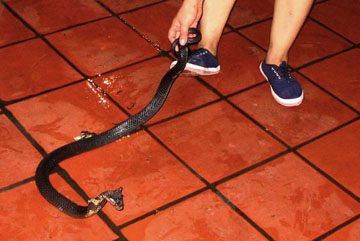 Cobra being wrangled. Photo by the author.

Your snake will arrive with a half-full bottle of rice vodka, a funnel and two waiters with huge knives.

First the head comes off and the venom is drained into the bottle (don’t worry, it’s only dangerous when taken intravenously), then the blood from the rest of the body is added.

The heart, still beating Indiana Jones-style, is placed on a saucer and offered to the most distinguished diner. Being foreign, this will be you. 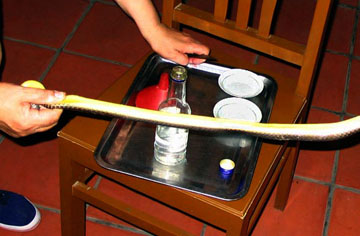 Cobra butchering in progress. Photo by the author.

Man up. Drop it in a glass of blood and venom liquor and down it like you’re back in college.

As if heightened virility and cobra powers aren’t enough, your reward is a multi-course meal made from the remains of your victim. You’ll feast on snake soup, snake spring rolls, barbecued snake and just about any other culinary option the chef can dream up.

Video of the heart the author consumed:

Even if eating a beating cobra heart is too far out for you, you can still find pages of information about traveling in Vietnam on Matador’s Focus Page Travel Southeast Asia. For thrills that require skills, read about surfing and cycling in Vietnam.

How to ruin a trip to Hanoi, Vietnam

How to: Ride an overnight bus in Vietnam