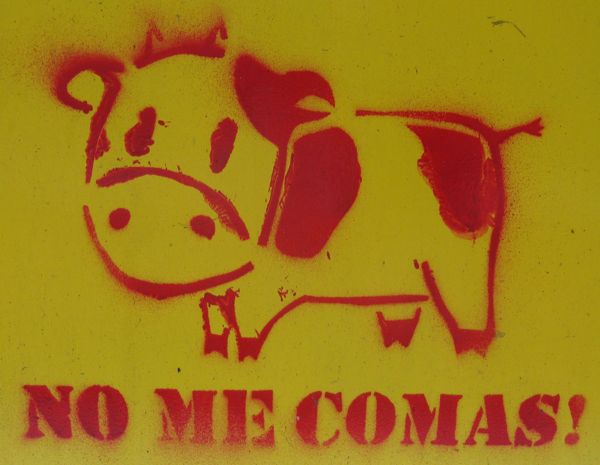 Finding a meatless meal can be a daunting prospect in one of the world’s most carnivorous countries. Valerie Ng shows you that it is possible to find a vegetable in the City Of Meat.

Indulge in all the meatless goodies you want, from hot and cold entrees to fresh salads, juices and desserts, for one fixed price. I managed to pass up this tenedor libre during my time here, but my parents stopped by when they were in town recently and were satisfied with their experience.

Take-out is cheaper than eating in, so you can take your meal to enjoy at the nearby Plaza de Mayo. 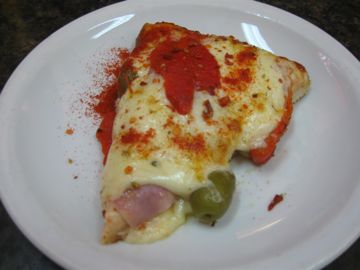 Fast food, Porteno style. The “muzzarella” is the safest bet at Buenos Aires’ most popular pizzeria, which has been in business since the 1930s. The pizzas here are fairly simple, usually with just one topping, and a crispy crust.

If you like onions, go for the fugazza. Most customers just come in for a slice or two and eat them standing at the bar.

Even if you’re not a vegetarian, you should try the goat cheese ravioli at Olsen, one of the city’s top restaurants, because it is probably the most divine dish to be found in all of Argentina. In fact, after all that meat and pizza, you’re probably going to be jonesing for something light.

As a starter, you’re presented with a small assortment of bagels. The creamy ravioli arrives on an asymmetrical plate, topped with watercress, drizzled with a berry sauce, and a couple of blackberries thrown in for good measure. It easily dispelled any preconceptions I’d had of the Argentines not putting any care into creating meals that didn’t originally possess four legs.

Even if this restaurant is known for its Sunday brunch and 60 varieties of vodka, but the ravioli is the dish by which I remember Olsen. 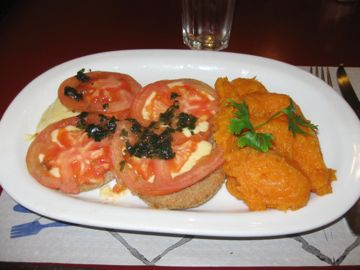 Bio is one of Buenos Aires’ most well-known vegetarian restaurants, where beef and chicken are replaced by house-made seitan. All ingredients used here are organic, and grown or produced in Argentina.

The chefs are quite creative with their menu, with dishes like quinoa risotto with goat cheese and mushrooms and mustard tofu with spicy vegetables and yamani rice. I ate here on two occasions, sampling the risotto, seitan and vegetable curry (which was basically a stir-fry with curry sauce), as well as a slice of chocolate cake with sesame ice cream.

The restaurant also doubles as an almacen, so you can pick up some of its organic products to enjoy at home.

Along with Bio, Artemisia is another one of the city’s choice vegetarian restaurants. It’s actually not 100% meat-free, since there are some fish items on the menu, but the menu is largely vegetarian.

All meals start off with homemade whole wheat bread and butternut squash spread. I ordered the polenta bruschetta topped with tomatoes and greens, which was so sumptuous that I didn’t need any fleshy accompaniments. Oh, and the veggies were definitely a far cry from the wilted lettuce and canned mushrooms I’d had elsewhere in the country. 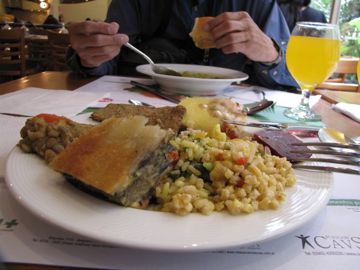 This cafe, a less touristy and less pretentious alternative to Cafe Tortoni, is best known for its Saturday night tango shows and for being the setting of a number of Spanish movies. In addition to coffee, tea, and pastries, the menu is filled with Argentine mainstays like grilled meat, pasta, and pizzas.

The one item that caught my eye was a soy version of a milanesa patty topped with caprese – tomato and mozzerella – and a side of pumpkin puree. I would never have expected to find such a dish in Argentina – at least not in an old-school establishment like La Puerto Rico – but felt compelled to order it just for the novelty. It certainly wasn’t as juicy as its meaty counterpart, but it certainly added some variety to my dining experiences in South America.

If you happen to be a pesco-vegetarian, this is a great place to sample Peruvian specialties as well as sushi. It won’t take long to notice that in addition to vegetables, this is a capital city that is largely devoid of ethnic cuisine as well as seafood. There are a few salad options if you refuse to eat any type of animal flesh.

Even though I was a bit flesh-weary, I couldn’t bring myself to pass up on a seafood stew of salmon, shrimp, and mussels with rice and beans. Argentines are known for being seafood-phobic but if they ever had the chance to taste the fish here, they’d know what it should taste like.

Be sure to check out Matador’s favorite spots in Buenos Aires, meatless or otherwise. Our guide to taking the bus in Buenos Aires is a must if you plan to take multi-wheeled public transport.