“We’re here to roll around in your bed for you, sir.” Photo: Exercise Tradewinds 2009, Feature Photo: Carly & Art

You’ve checked in and you’ve had your dinner. You’re all by yourself and now it’s time to catch some Z’s.

Do you call for a turndown service? A cup of warm milk? A soothing hot toddy?

Or how about a team of grown ups in “special all in one sleeper suits” to come roll around under the covers of the bed you’ll soon be snuggling up in to warm it up for you?

It can’t be creepy. As the Holiday Inn sleep doctor Chris Idzikowski (director of the Edinburgh Sleep Centre) has explained, it’s science!

There’s plenty of scientific evidence to show that sleep starts at the beginning of the night when body temperature starts to drop. The decline occurs partly because the blood vessels of the hands, face and feet open up and release heat.
A warm bed – approximately 20 to 24 degrees Celsius – is a good way to start this process whereas a cold bed would inhibit sleep. Holiday Inn’s new bed warmers service should help people achieve a good night’s sleep especially as it’s taking much longer for them to warm up when they come in from the snow.

Maybe what you hear when you read all that mumbo-jumbo is: 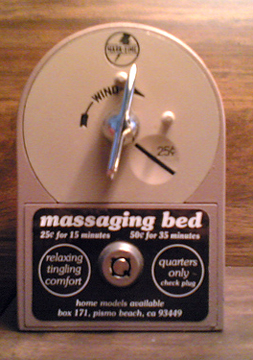 It’s a far cry from the days of the quarter fed
massaging bed. Photo: grenade

If that’s the case, just ask yourself: What’s more soothing than multiple strangers dressed in adult sized, terry-cloth footie pajamas coming into your room and rolling around your freshly bleached sheets before you get into bed?

As a spokesperson for the Hotel is quoted as saying, “The bed warmers service is a bit like having a giant hot water bottle in your bed, warming it up before guests climb in to give them a great night’s sleep away from the cold – of course they jump out before you jump in.”

Let’s hope they aren’t serving beans for the employee meal.

Okay. Maybe science doesn’t have a strong enough explanation to make this an appealing prospect, and no matter what they say, people aren’t water bottles, but if you happen to take advantage of this opportunity being offered in the London Kensington branch of the hotel, we hope you’ll let us know in the comments field below.

There have got to be better ways of getting to sleep! For more ideas about that, see MatadorAbroad‘s How to Sleep in Your Vehicle.

Tagged
Travel London, United Kingdom
What did you think of this story?
Meh
Good
Awesome