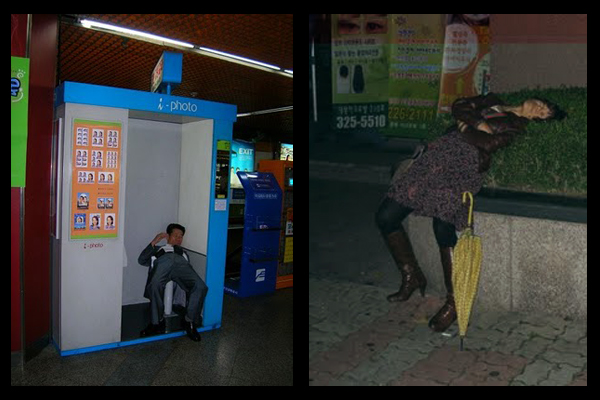 Black Out Korea began as a few photos by a young Westerner in South Korea documenting those who had drunk to excess sleeping it off in public. Witness men in suits lying spread eagle on the ground, mouths agape, sometimes with nearby puddles of vomit.
See couples passed out over food, one on each side of a table in a restaurant, their backs in perfect round symmetry as they recuperate from a night on the town before heading home.

I became familiar with the site while working with Kate Holmes on her piece Drinking in Korea Requires Etiquette and Endurance, who provided a photo from Black Out Korea.

I was intrigued and began poking around the site and got in touch with the blog owner and he agreed to an interview under condition of anonymity. Due to threats he has received, the fact that he is still in Korea, and aspects of the culture there that are touched on in this interview, his identity is not revealed here. On the last page of this article, the man who heretofore will be referred to as BOK tells us about his rationale about anonymity.

And now, the interview:

MatadorNights (MN): How long have you been in Korea?

Black Out Korea (BOK): Since March of ’09, so I suppose that makes it nigh on a year and a half.

MN: How long were you there before you started this blog?

BOK: About 6 months before I got around to actually starting it, but I had been intermittently been taking pictures and marveling at the black-out phenomenon since I got here.

MN: I’m guessing you work there. Can you tell me what you do?

BOK: I’m an English teacher. Tons of foreigners from all over teach English here, and most have pretty boring (and repetitive) personal travel blogs.

Nothing against travel blogs in general, it’s just that when you’re friends with a couple hundred people who all seem to go to the same places in Korea, marvel at the same cultural oddities, and take the exact same routes through Southeast Asia, the concept gets kind of disenchanting. But I digress.

MN: What was your initial reaction to seeing people passed out this way?

BOK: I still can’t really believe it. I’m from the US, and if you are even drunk in public you’re apt to get arrested, let alone if you’re blacked out. And even then, getting arrested would be the best case scenario. People would be robbed blind if they passed out this much back home in the States.

Apparently that’s not much of a problem here, they just have to watch out for foreigners with cameras.

MN: Which is your favorite all time photograph or series of photographs?

There are several hundred pictures on the site now. While the photos themselves can be gold, I really enjoy the captions and stories that people send in with the pictures. They really help put you in their situation and give you somewhat of the same feeling of “WTF?” that they experienced when they saw the scene.

For example, this one: 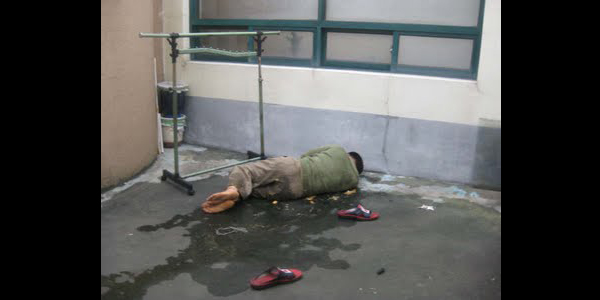 The caption states, “This was taken at about 6:30am by one of the tenants of this apartment. That is the landlord, shoeless, and soaked in his own urine and vomit He was no more than 20 feet from his door.”

I mean, can you imagine seeing your landlord like that? What would you even do? Wake him up? Every time you saw each other for the rest of your tenancy you’d share this silent embarrassment of that one fateful morning.

There are some pretty amazing ones from the subway as well. The best usually involve the subject curled up on the dirty subway floor. I can understand being tired and taking a hunched-over nap (everybody has done that) but these are ridiculous: 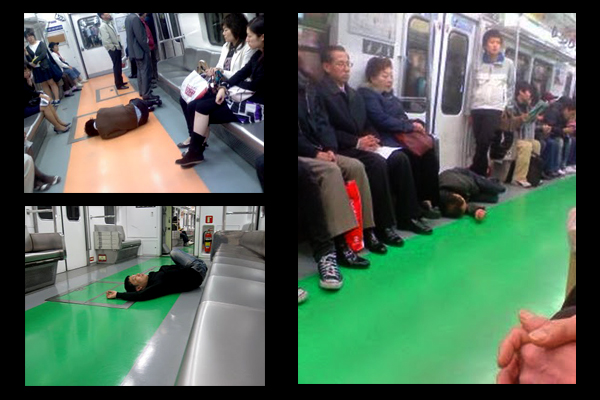 Upper left: Sometimes the Floor is More Comfortable, Lower left: Empty Seats? Fuck That., Right: Did Anyone Trip Over Him?

For me personally, I’m going to have to go with this one being my personal favorite (so far):

He just looks so resigned, like he said “Forget it, I’ve gotten this far, and I am NOT going up there”

MN: How long was it before you started to receive submissions?

BOK: It was only about a week before they started to trickle in. I told some of my close friends, and posted a couple entries on Facebook. After about two weeks, I was getting a few emails a week, and it’s been pretty steady since. It hit the Korean blogosphere in November of last year, and I suppose that was my 15 minutes of fame when I got the most activity on the site.

MN: Do you reject any submissions? Why and how often?

BOK: It is very rare when I’ll reject a submission. If the person sleeping outside is homeless (there are a lot of homeless folks in Seoul), I won’t post the pictures out of principle.

I’m not a saint, however; early on in the site development there were a few I posted out of sheer ignorance. I also don’t post photos of really, really embarrassing blackouts. Usually these involve nudity and a fair amount of crude poses. Although, once again, I’m not a saint. You can find still a bit of nudity and crude poses on the site. Pervert.

Next Page
Tagged
Interviews
What did you think of this story?
Meh
Good
Awesome