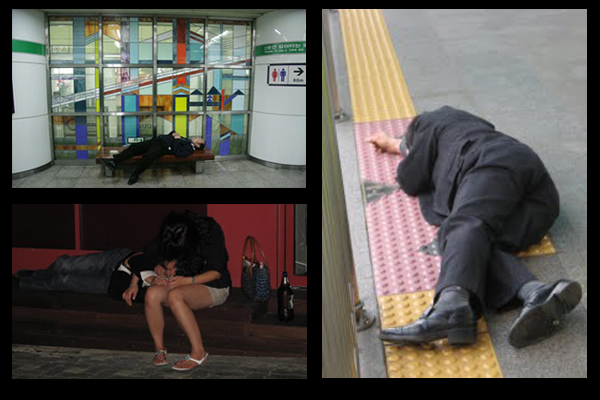 MN: A lot of the people in the photos on your blog look normal. Is this something most people do?

BOK: Oh this is extremely normal, especially among Koreans.

These pictures aren’t just crazy one-offs. You can walk down practically any 2 or 3 block radius in many metropolitan parts of Korea on any given day of the week and see a man (usually a man, anyway) asleep, throwing up, or stumbling around.

MN: We published Drinking in Korea Requires Etiquette and Endurance on MatadorNights and there’s a lot of info in there about how the drinking culture in Korea is something that would be seen as unhealthy in a lot of other cultures.

In your experience, what’s the attitude toward drinking to the degree that you pass out in, say, the subway?

BOK: Unless you have lived or spent a few weeks here (or another east Asian country like Japan or China), you may not understand how hard-wired community drinking is into the social life here.

Many of these men are older, businessmen (called “salarymen” in Japan) and often times are very heavily pressured by bosses and colleagues to go out drinking mid-week, usually to excess and many of them do not return home. A lot are also younger people in their twenties, who are in school or recent graduates who have been brought up watching this kind of behavior and mimic it pretty expertly.

If it’s not a drunken man in a business suit you see, it’s usually a couple with the guy or girl dragging their rag-doll significant other along the road, or patting their hurling partner’s back.

The bottom line is that it extremely common, and unless somebody is actually being belligerent and vomiting on or physically assaulting someone (same-same?), most people just don’t care. “The Right to Black Out Publicly” is so ingrained in the culture here that the attitude is to “let them sleep it off, they’ll be fine.”

MN: The other people in the photos seem nonplussed. How common is it for someone to try to help the person that’s passed out as we see in this photo? 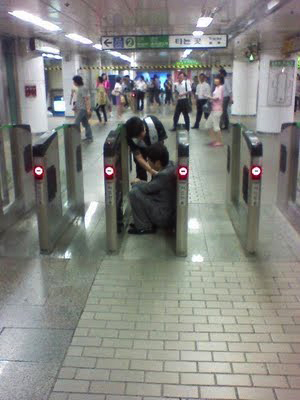 Sir, You Seem to Have Blacked Out Mid-Transfer

BOK: Haha, that’s a solid picture as well. Unless a person has friends with them, it’s usually fairly rare to see anybody try to help someone to safety.

The only reason this guy is getting any help is because that gentleman helping him happens to be a subway attendant, and the poor guy can’t have a drunkard passed out in the middle of his area. I wouldn’t be surprised if he just moved him to a nearby bench and left him there.

BOK: Well, that’s a different story altogether. Most Asian countries and peoples are very much married to the concept of “saving face” — kind of a compulsory honorific and deferential attitude in Asia — and mandatory respect is something that I’ve always challenged.

In Korea what I do is seen as funny by a lot of foreigners living here and Koreans with a strong sense of humor, but a lot of people think it’s very disrespectful and that I should leave them alone.

I am frequently accused of not understanding the culture simply because I bring these blackouts — blackouts that were not caused by me and are the sole responsibility of the subject — to the internet. I’m seen as the bad guy for “not respecting Korean culture,” rather than the person who just threw up all over a bar window and urinated on themselves.

MN: Lots of people respond with shock when you’ve posted photos of people being harassed. Is this unheard of in Korea?

What’s your response to those that say these photos are a violation of privacy as in the entry featured here?

BOK: Well, my initial response is a solid “Fuck You,” but that’s my reaction to just about everything.

In all seriousness, being a Westerner, I was sort of brought up with the idea that nothing in public is sacred, and that attitude is clearly reflected on the site. The pictures are taken in public, and while I’m not exactly a Korean law scholar, the site is hosted in the US, so I’m not really too sure that there’s much they could do anyway.

In regard to the infamous Marmite Blackout, most people don’t physically assault their blackout victims, but I thought that one was pretty harmless and hilarious to boot. It’s not like they cut off his fingers or stole a kidney, both of which they probably could have done quite easily given the state he was in.

I personally try to do my part by keeping the captions relatively respectful and stay away from overtly insulting the subjects of the photos. I mean, no need to kick a man while he’s down (literally).

MN: Is this only common in big cities or is it a countrywide phenomenon?

BOK: It seems to be pretty much ubiquitous. I’m sure that there are parts of Korea that I just don’t know about or can’t get to where people don’t get absolutely batshit wasted, but if there are, I’ve never heard of them. I’ve seen the phenomenon in every city I’ve been in.

MN: What about being robbed? Have you heard of that happening to anyone when they’re publicly passed out this way?

BOK: I’ve heard that it’s a problem from Koreans, but have never actually heard of it happening in practice. One really good thing about Korea is that the crime rate here is pretty much nonexistent. I mean, I hear from Koreans who have much more news coming their way that there are crime problems, but compared to America, I feel virtually no threat. You know, except for that giant powderkeg up North.

In downtown Seoul, there are probably a lot more altercations, however. One of my buddies blacked out in front of the Seoul Subway Station once and woke up to a bum rummaging through his pockets. So I’m sure it happens. 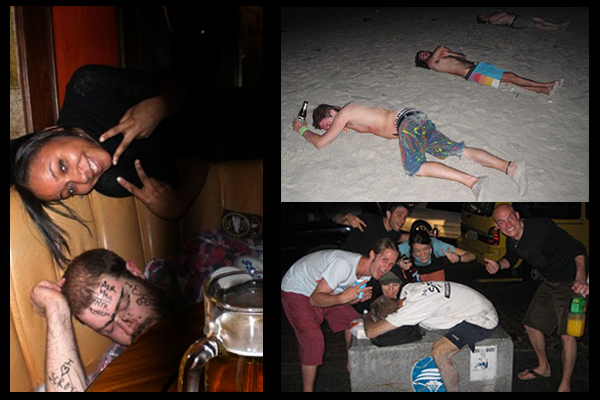 Is it a product of adapting to the drinking culture? Are they just less likely to make it home because they feel safe doing as the Romans (or Koreans) do? Or do you think it’s a result of the fact that the majority of your contributors are Westerners?

BOK:There are definitely a lot of Westerners here, but for a while when I was starting it out I wanted to establish the site as a mostly Korean phenomenon. And for the most part, it is — but only a Sith deals in absolutes.

After a while I was getting some flak for not posting pictures of foreigners, and once the site was getting solid viewers I decided to post more of them.

As to the reasons why, I think it’s two of the things you said — adapting to the culture and doing as the Koreans do. I mean, bars here usually don’t close. And if they do, it’s not until 6-8AM anyway, so people will very often drink to excess, especially if they’re hanging out with Koreans.

And as I mentioned before, there are virtually no safety or crime issues. If you had to choose between a 20,000 won cab ride or passing out on a bench until the subways and buses start running, why not save your money?

MN: Are there any other issues you’d like to discuss as far as Korean drinking culture goes?

BOK:I would just urge people to take the site with a grain of salt. I feel as humans we all have our personal ideological wars we choose to get emotional about, but a sense of humor is one of the most important things I believe a person can have.

A lot of sociological problems in Korea really upset me, and as a teacher, the Korean blackout does affect me indirectly. Many of the students I teach very rarely get to see their fathers because they work so much and then go out drinking during the week, and many of the mothers (who are practically forced into “late minute” or obligatory weddings by society, rather than waiting for the right person) don’t get a lot of help raising the kids.

Almost any hagwon (private English school) teacher who teaches kindergarten or elementary will tell you that you basically became a parental figure for these kids. You spend a lot more time with them than their parents do, when you consider how many academies these poor kids are forced to attend.

I could write a sociological dissertation on the inherent problems that Koreans inflict upon themselves and what compounds them, but what would that do?

Korean nationalism is a problem too, not to mention racism and xenophobia, both of which I’ve had to deal with for the first time since coming here.

All of these are things that kind of piss me off, but the funniest of all of these are the blackouts. Who knows, maybe Koreans will see the site and it will create a paradigm shift in drinking behavior, but I doubt it. With the Korean mindset, it’s likely to be seen as criminal, amoral foreigners making fun of innocent Koreans who graciously allowed them into their country. The nerve!

BOK’s statement about anonymity is on the final page.

Prev Page Next Page
Tagged
Interviews
What did you think of this story?
Meh
Good
Awesome

39 of the Most Breathtaking Natural Wonders in the World
14 Laws From Other Countries That the US Should Adopt
Travelers Are Sharing the Worst Tourist Traps They’ve Experienced Around the World
Italy’s Lake Garda Is a Serene and Less Expensive Alternative To Lake Como (and Looks Like Heaven on Earth)
Take Better Photos: 8 Landscape Photography Tips for Self-Taught Travelers