This and All Photos: Kate Sedgwick

It seemed like an acre of bodies at rest that we squeezed through to get to the other side of the stage where the “espacio fan” was.

What the Pepsi Music Festival in Buenos Aires calls “fan space” is an area in front of a stage that is at least ten feet off the ground, and what it amounts to if you’re all of five feet tall (like I am) is that you won’t be seeing much of any of the musicians you came to see below knee level.

It means their torsos will often seem to hover, cut off by the blackness of the stage. To be in the special area will mean that the little view you have will be blocked by massive cameras and their operators as they simulcast choppy close ups that pan in and out like children playing with a zoom lens for the first time.

Despite being herded into an overpriced “fan” corral, the privilege of which I paid extra for, I so thoroughly enjoyed Faith No More‘s performance November 1st, 2009 that I am having trouble defining it. While I was not able to see very much of what was happening on stage, I was there more to hear the band than to see them and they delivered in a big way. 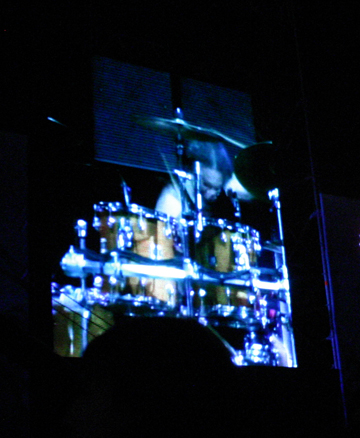 The only view I ever got of Drummer Mike Bordin
was on the big screen.

I’ve been a fan since my sophomore year of high school. At that time, FNM’s sound made me sick. It made me nervous. It touched a part of me I didn’t know I had and there seemed to be answers to mysterious questions in the dissonance, lyrics, and syncopation on Angel Dust. I hadn’t heard anything quite like them and I still haven’t. I tortured myself with that record, listening to it over and over even though it scared me, until I crawled into that sound and identified with it.

Though their style changed a lot with the two subsequent albums (King for a Day and Album of the Year) at least partially because each had a different guitarist (Trey Spruance and and Jon Hudson respectively), Faith No More sounds like no other band. Metal? Lounge? Rock? Country? Spaz core? Noise? Easy listening? Punk? 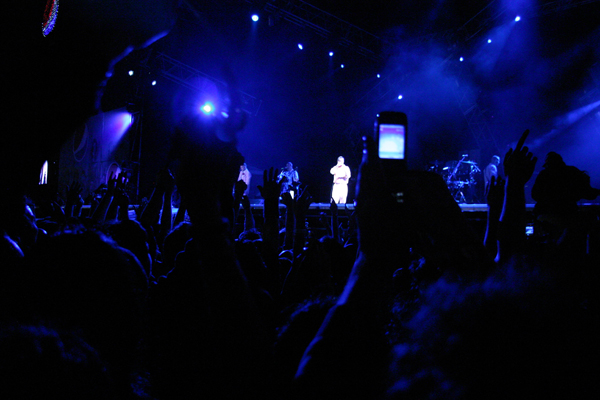 Yes. All of the above. And though their sound is hard to pigeonhole, they are immediately recognizable in no small part due to Patton’s vocals that range from leading-man smooth to larynx shredding shrieks and barks. 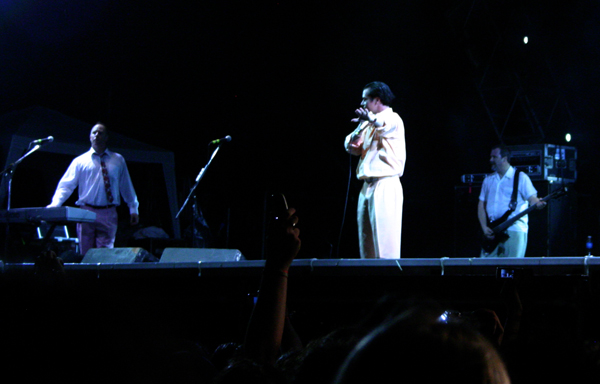 I saw them once before in 1995 on the King for a Day Tour when they made their way to Louisville, KY. That show was much smaller, I was right up front and though the venue and show were different, the truth about FNM is that the band is tight, disciplined, and incredibly skilled. At that show Patton ripped out the back of his pants when he crouched to let loose a note from the bowels of hell (or at least his own). Unfazed, the show continued with periodic flashes of the singer’s red underwear. 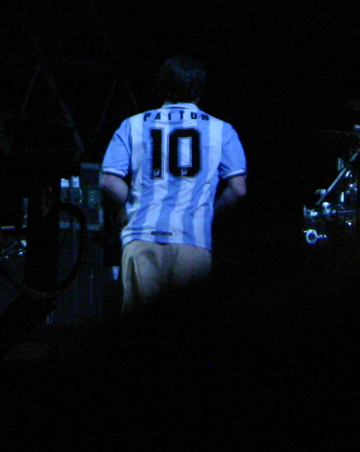 Patton donned a #10 soccer jersey for the encore,
drawing a parallel between himself and Argentine soccer legend
Maradona. Was it a joke? Maybe.

It broke my heart when they split up. Though I have followed solo projects by members since then, I enjoy them as a team. Seeing them play was an emotional experience for me. Even if they’re in it for the money, each of them gives themselves up to the show and the music and that’s what we’re all there for.

While being in South America often has me missing bands touring the US and Europe, this time, it’s the kids in the USA who are missing tour dates for the freshly reunited band who seems to be following Summer around the world starting in Europe and coming this way for the hot weather. Those of you reading this – if they tour the US you’d be an idiot not to go. Faith No More is as good or better than they ever were (though I have to say that I miss Jim Martin’s guitar).

If you haven’t seen a big rock show in Buenos Aires, you’re missing out. The fans here are practically rabid in their enthusiasm. No one is too cool to dance and so if you’re used to American fans who seem to want to be caught in a sexy pose if the hot guitarist happens to look their way, fans in Argentina give as much as the bands and in some cases, more.

Patton remarked on the crowd’s preference for singing the guitar and keyboard parts. We were a wall of sound that could be heard through floor monitors and amplifiers. This was a show I will not soon forget. The following are the first three numbers. Enjoy!

Are you a freak for Faith No More like the author? Has one of your favorite bands ever come to your neck of the woods? Do you find rock concerts in Buenos Aires to be a bit too much? Let us know about it in the comments field below.