The song is quite funny, but his story has me more than a little worried about my drums on my impending United flight out of Korea.

To be fair, I’ve flown United before and my instruments were very well-treated. Unfortunately, Dave wasn’t quite so lucky.

In March of 2008, Dave’s Halifax-based band Sons of Maxwell headed to Nebraska for a week-long tour. During a layover in Chicago, a passenger cried out, “My god, they’re throwing guitars out there!”

The band members crowded around the windows to witness United baggage handlers throwing their instruments with little regard for fragility.

Dave notified a flight attendant, with no result. Upon arriving in Nebraska, he discovered that his $3,500 guitar was badly damaged.

During a layover in Chicago, a passenger cried out, “My god, they’re throwing guitars out there!”

What followed was months of attempted communication on Dave’s end, and evasiveness from United that, the way he tells it, was so frustrating it’s almost funny. Dave spoke to United and Air Canada employees, who tossed blame back and forth with other employees like a game of hot potato. 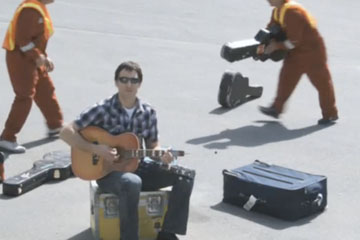 A Short History of a Claim with United Airlines

He befriended a few very sympathetic agents in India.

He spoke to a confused United employee in New York who was unsure why the Chicago folks had forwarded his call to her.

He called numbers that were functional one day and mysteriously disconnected the next.

He was told to bring his guitar to Chicago for inspection after he’d returned to Halifax, Canada.

After months of running into dead ends and jumping through hoops, Dave’s claim was finally denied.

His offer to settle for $1,200 in flight vouchers to cover the repair costs was rejected as well.

In his last email to the United employee who denied his claim, Dave promised to make three music videos about the experience, with the goal of hitting one million views in a year.

So far, so good. “United: Song One,” A.K.A. “United Breaks Guitars” is getting massive attention on YouTube and “United: Song Two” is due later this summer. With over 15,000 hits for the first song in less than two days, I’d say Carroll is well on his way to reaching his goal. 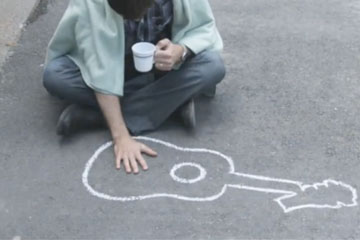 Meanwhile, I’ll get back to searching high and low for as much styrofoam popcorn, bubble wrap, and duct tape as I can find for my drums and hope that the name United doesn’t really mean United against the passengers.

All photos are stills from the video.