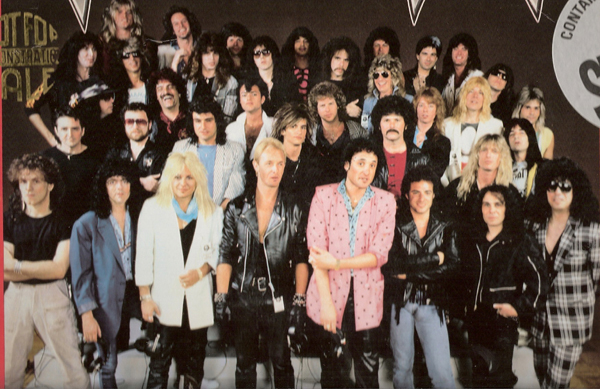 Photo from the back of the We’re Stars album

Dateline 1985. Rallied by Ronnie James Dio, some of heavy metal’s biggest names gathered to create the rock answer to “We Are The World”.

I’d been buying every magazine I could find, poring over the details of metal’s who’s-who charity song, which followed on the heels of “We Are The World.” Six months passed before it would air (the record labels reportedly argued about clearances) but when it did, on January 1, 1986, I had BOTH of my family’s VHS recorders recording The Making Of Stars and the world-premiere video.

Written by Dio and then-bandmates Jimmy Bain and Viv Campbell, “We’re Stars” contained some decidedly Dio lines (“We can be strong. We are fire and stone. We all want to touch a rainbow.”). Whereas other charity songs focused on, you know, the problem at hand, this song’s hook centered around the participants. The chorus goes:

Nobody knew what they’d look like over 20 years later.

More Dio? Check out Ten Metal Musts for Your iPod.

Totally bummed about Ronnie James Dio’s death? We’d love to hear how he touched your life, too.