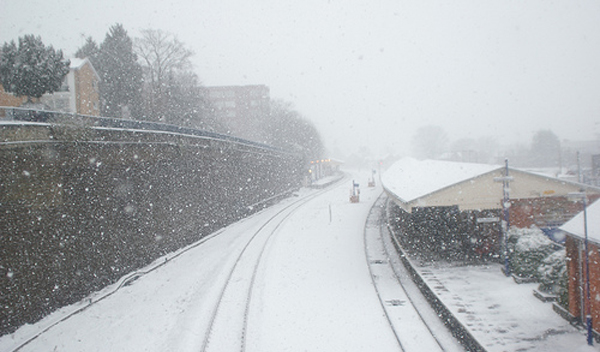 A train stopping snow in Buckinghamshire in February, 2009 – Photo (and Feature Photo): MonkeySimon

When you were a kid, did you ever wish you could have a crazy slumber party among the beds and merchandise in a department store?

50 customers including 20 children were treated to just that in the bed department of the John Lewis store on Monday the 21st after intense snow stopped traffic. They were outnumbered still by the staff of the store which totalled 54.

They were fed, though there’s no word what was available to eat, before they all cuddled up in the beds that were made up for the purpose and settled in for a night of shut eye.

Deborah Strazza, the store’s managing director says, “It was so sweet, the kids absolutely loved it. They thought they were in Toy Story.” She is a mother, too, and couldn’t square herself with the idea of stranding families out in the snow. According to Independent, she went on to say, “The customers were really, really grateful and they could not thank us enough.”

Matador Community member Global Grasshopper gives us the Top 10 Destinations for Holiday Shopping in the UK and John Lewis is mentioned. Make that last minute road trip using her list!

Become a community member and share your recommendations with a group of world travelers that is growing every day.