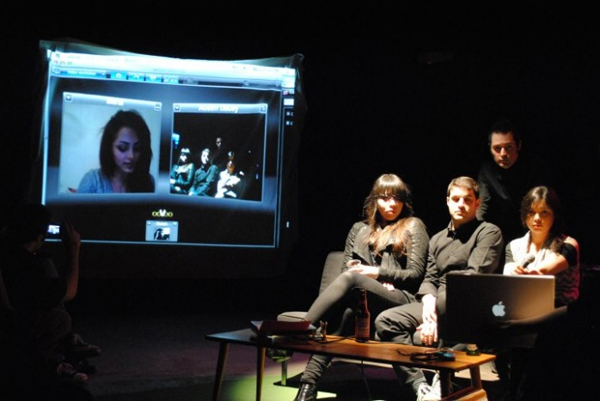 Maral of Platic Wave by ooVoo chat from Tehran talking to Cruel Black Dove; This and all photos courtesy of the Impossible Music Sessions

At Littlefield Performance Space in Brooklyn on March 3, 2010, an audience rushed an empty stage. Though New York audiences are known more for their tendency to quietly nod their heads and avoid getting sweaty, something had broken through.

Onstage was a MacBook with an open ooVoo chat with Plastic Wave projected on a screen. Cruel Black Dove had just finished a three song set of the Iranian band’s melodic, heavily electronic music.

Plastic Wave’s story is the stuff subversive novels are made of. 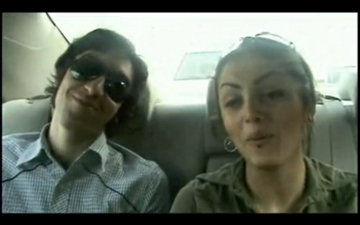 Natch and Maral of Plastic Wave on their way to having their
US visas to play SXSW denied in Dubai, 2009

Saeid Nadjafi (Natch) and Maral formed the band after meeting at “N!, the largest underground rock concert ever in Iran,” during which more than 200 audience members and musicians were arrested (including Natch and Maral who had been performing), and many were beaten and interrogated.

Though rock music is prohibited in Iran, and there are laws against females singing for audiences that include males, the female-fronted band released a self produced album [RE]action in 2008, adding guitar player Shayan Amini to the lineup.

The show at Littlefield was the debut of the Impossible Music Sessions.

Louis Chan of the Center for Inquiry’s video about the Cruel Black Dove/Plastic Wave show:

Where does an idea like this come from? Austin Dacey, who founded the Impossible Music Sessions laid out a number of sources during a late night call. A representative to the United Nations for the International Humanist and Ethical Union, writer and musician frustrated by his inability to see Persian bands he enjoyed, such as Take it Easy Hospital (before they were cool) and Deev, he started wondering about ways to get around political barriers of censorship that were keeping provocative music away from audiences and musicians effectively silenced.

With help from Freemuse, New York Foundation for the Arts, The Center for Inquiry, and a roster of volunteers and interns, Dacey is making Impossible Music (in his words), “not quite impossible.” They reach out to censored bands whose music strikes a chord. The music comes first. “Let me be clear,” he says. “We’re not a charity. We only feature music that stands on its own, that deserves an opportunity for recognition and a wider audience.”

Logistically, the process varies based on the nature of collaboration between the bands, the situation of the censored artists, and the music itself. While Cruel Black Dove practiced extensively to produce and rehearse Plastic Wave’s music, a process chronicled briefly in video on the Impossible Music website, accomplished hip-hop artist, and educator Hasan Salaam’s more recent performance of a single song by Baloberos Crew from Guinea Bissau in West Africa required translation from Portuguese Creole. The process took six months, and finding an American rapper who was willing and capable of representing the Guinean band was not an easy thing.

Baloberos Crew were ‘detained and intimidated’ in 2009 for their song “Seven Minutes of Truth” which criticizes Guinea Bissau’s government and military: Guinea, where did you go wrong? The republic of Guinea is being written in bullets.

Baloberos Crew at a backyard concert in Guinea Bissau:

Hasan Salaam opened at Littlehouse on June 30th with an explanation of the collaborative process with Balaberos Crew. 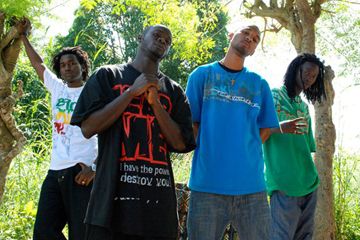 The rapper learned the original Portuguese chorus and rapped in English. You can listen to his version on the Impossible Music Sessions website. The evening ended with the Guinean band freestyling by live video chat.

Salaam now has plans to visit the West African nation and to continue speaking out about the political situation there. In the official press release about this project, he is quoted as saying, “I got involved in the Impossible Music Sessions because I believe in Freedom, Justice, and Equality. I believe that music should inspire that in all people around the world, and I support any artist in any genre that stands for the same basic human rights.”

Though nothing is firm yet, there is talk of featuring Cameroonian Afro-Beat artist Lapiro de Mbanga who is serving a prison sentence of three years on trumped up charges.

The true cause of his imprisonment is widely believed to be for criticizing a bill passed by the National Assembly in Cameroon to change the country’s constitution to provide the president with “immunity from prosecution for acts as president, and to allow the president to run for unlimited re-elections,” with his song Constitution Constipée [Constipated Constitution (which can be heard at the Freemuse MySpace page)].

In this case the nature of the performance could easily change. Mbanga’s in prison, so video conferencing will likely be impossible, though he has access to a cell phone.

The Future of Impossible Music

Dacey says Impossible Music is on the lookout for a metal band now – one that faces consequences for the perception that they are doing the devil’s work. Maybe they’ll be from Syria, Malaysia, China, Iran, or Burma. There is no shortage of countries where music is government controlled. “There are places in Northwest Pakistan where all music has been suppressed by the Taliban,” he says.

Asked if any of the Impossible Music artists have faced punishment as a result of the project, Dacey says, “Not yet.” Nor has any band approached turned down Impossible Music, but he says the project is willing to protect the anonymity of future collaborators if necessary. The hope is to host two more sessions in 2010.

For now, Salaam’s involvement with Baloberos Crew points to the possibility of lasting relationships with musicians worldwide to bring awareness to censorship and silenced bands’ messages, though they may not be reaching the intended audience yet.

Impossible Music represents a true underground. The people involved are doing it because they believe in the project. For now, performances are limited to the stage, but Dacey is open to expanding the performances to reach an online audience. It will take the right volunteers and a lot of bandwidth, but the future is wide open and all offers of assistance are welcome.

If this is all music to your ears, you’ll probably be interested to see the documentary Sounds Like a Revolution, about music as an instrument of change.

Were you at either of the Impossible Music Sessions? We’d love to hear what it was like first hand from a participant or audience member in the comments below.