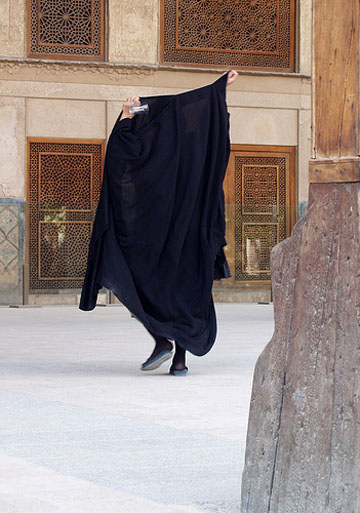 While Iranian cinema was preoccupied for much of the 1980s and 1990s with symbolism and allegorically cherubic children, the Iranian pics at Venice this year deal directly with the social upheaval in the country both preceding and following June’s presidential elections.

There are at least two women directors out of Iran this year at the festival,Hana Makhmalbaf and Shirin Neshat. Shirin Neshat‘s debut “Women Without Men” is set in the early ’50’s during an American government sponsored upheaval and traces the lives of four women seeking personal peace in the time leading up to the revolution of 1979.

In the Variety article, Neshat says of the film and her work:

It’s important for Western audiences to know about the events of 1953 and how that led to the 1979 revolution and the events we saw in June.

We are seeing history repeating itself, only the players have changed. Instead of the shah we now have supreme leader Ali Khamenei and Mahmoud Ahmedinejad.

What is the same is seeing the Iranian people trying to free themselves from attempts to take away their liberty.

Hana Makhmalbaf’s docudrama “Green Days” mixes actual and staged footage to create a portrait of a woman in the aftermath of Iran’s most recent elections. The director is just 21 years old.

The other film mentioned in the article is Nader Takmil Homayoun’s “Tehroun.” Homayoun splits his time between France and Iran and his film exposes a seedy underbelly in a statement about the disenfranchised youth of the country.

These films were created very quickly, but if these selections are any indication, we should be seeing some strong films coming out of Iran in years to come with a new perspective of world politics informing filmmakers’ sensibilities.

Interested in what else is going on in Iran? Check in with Matador expert Jason Rezaian in this Matador Trips article.

Looking for one or two more reasons to go to Iran to seal the deal in your head? See Jason’s article 7 Reasons To Travel To Iran NOW.