View all travel news
Top Destinations
Top CitiesView All Destinations
Trending Regions
Trending Cities
Load More
I love weird soft drinks. In every China Town and Korea Town I am always on the look out for cans that promise chunks of foreign fruit matter – drinks that eat like a meal. Odd favor, texture, unexpected ingedient or a cool can? I’m there.

The other night I was out for an otherwise lovely dinner in a Peruvian restaurant in the Once neighborhood here in Buenos Aires. When my initial order for a diet drink was declined due to diminished supply, I looked to the cooler to my left and saw the yellow wonder you see here.

“I’ll take the La Dorada,” I said to the waiter.

Moments later, my friend and I were drinking this. It looks like Mountain Dew but tastes like the trashiest, low-rent soft drink of the Southern States: Big Red. 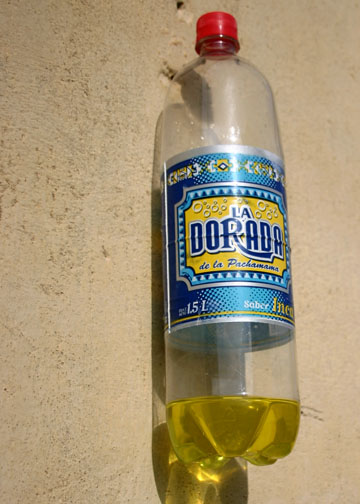 Nectar of the Gods? Um. No.

For those of you who have never had the pleasure, Big Red is fun to drink, but you’ll be disgusted with yourself for enjoying it. It tastes like Bazooka bubble gum with the volume turned all the way up in liquid form. It’s so sugary you might swear it’s thicker than your average soda – a carbonated syrup infused with a dye that probably causes cancer.

This “La Dorada de la Pachamama” is “Inca” flavored. La Pachamama is the Mother Earth goddess of the people of the Andes. Perhaps you don’t believe that a soft drink company could be this tacky? I assure you, it is.

This is absurd in the same way that naming a knock-off Laffy Taffy, “Peter at the Pearly Gates” would be, further classifying its treacly sweet flavor as “Catholic.” But there are still Catholics around to object, I guess.