SANDY SCOFIELD has always been a musician. Leader of the all female Cree band of singers, Iskwew, Sandy started making music before she can even remember and has played and sung in many bands over the years. From Cajun to rock, classical, and jazz, the foundation she had before coming into Cree Aboriginal music incorporated a wide variety of sounds and instruments. She plays piano and guitar in addition to being a singer.

I talked to Sandy by Skype about current issues pertaining to First Nations cultures in Canada, how she got into making traditional music, and representing as a Cree female musician and how that’s a political act. We also talked about her upcoming collaboration with another 2011 Rainforest World Music Festival band: Warsaw Village Band.

Sarawak, where the RWMF happens, is a tropical rainforest climate. Humidity doesn’t factor into the actual temperature, so I wasn’t really prepared for the way the air seems thick with moisture there. It takes the body a while to adjust, and if you want to be out in the daytime, you’ll have to slow it down. Even so, the vibe at Santubong One — where the musicians, organizers, and members of the press were staying — was busy and cheerful. There was a lot of smiling, waving, and introducing happening in quiet tones in the fan-circulated air.

In the massive, earth-toned lobby, I tried to use my computer and couldn’t make a connection. I saw a woman using the same brand of computer and asked her if there was any special trick. We started talking. She asked me what band I was in — something I would hear a lot over the next few days. I felt like a sell-out saying that I was with the media.

She had a great smile and a totally open affect. She introduced herself as Sandy and told me she was with Iskwew. I wasn’t expecting the pronunciation, is-kway-yo, and came off looking like I hadn’t researched the bands when I asked her to repeat herself. Her northern accent reminded me of my Wisconsin childhood. She seemed open, excited to be there.

The subject changed quickly over the course of the next five minutes — places, bands, plans, computers, operating systems, the artistic director of the RWMF, Randy, and how much of a help he’d been. I offered my beer tickets to Sandy and she said she couldn’t use them either, but that her girls (the ones in her band) might. I told her I’d keep an eye out for her and get them to her. She told me she wasn’t looking forward to gearing up in full suede regalia in that heat and we said goodbye.

The next time I saw her, she was onstage. I don’t know what I was expecting, but the full harmonies that seemed to me to be ’40s and Western weren’t what I’d imagined. There were three women singing. Sandy sat in the middle in purple suede, her persona just as open onstage as it had been in the lobby of Santubong One. She’s a born communicator — her voice is one it’s hard not to pay attention to. She explained that what she and her band were wearing weren’t costumes but regalia, an expression of their Cree culture. She translated the name of the band. In Cree, the word iskwew means “woman.”

There’s something timeless about the sound of Iskwew, something celestial. I closed my eyes and pictured blue skies. I got the feeling of being lifted up into the clouds hearing their sound. The instruments they use are minimal — rattles, drums. The major melody and harmony is vocal, thoroughly feminine, and at times fierce, but it’s a big, big sound.

Scofield came to Aboriginal music later in life, embracing her heritage through song. She said, “I went to the Banff Centre for the Arts in 1995 and did a ten-week intensive with Sadie Buck from Six Nations in Canada — she had this residency for urban women who grew up without oral tradition and she brought in women elders from all around Turtle Island (North America) to teach them their traditions, songs, and song traditions.” 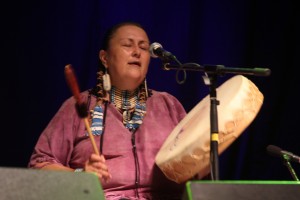 Sandy singing and playing the frame drum at RWMF.

During Iskwew’s performance at RWMF, Sandy told the crowd that Iskwew’s harmonies are not strictly traditional. I asked her about that over Skype, she explained it to me in more depth.

“That’s not historically how traditional singing has gone. Historically it’s octaves in unison, but there’s more and more groups that are putting harmony into stuff. So some of the stuff we do is just unison singing, octave singing, but then we do a lot of more contemporized takes on traditional music.”

“When you ask me a question like ‘Have you come across elders or people, traditional people, that don’t like that?’ and I’m sure they’re out there, but nobody’s ever really come up and said anything. People, even the old people, they seem to like it.”

She emphasized the role of women in Cree culture, saying “One thing is that in a lot of First Nations culture, women are the keeper of the land, and for all three of us [in Iskwew], because we’re all Cree, all three of us that were in Borneo, women are held in high esteem because of the power they have to bring forth life, so it’s one culture that really esteems its women. We’re treated really well.”

But that statement was made about the role of Cree women in Cree society. Not all of Canada feels that way about Aboriginal women. The day I talked to Sandy was the day before she was to play Ottowa at the end of Walk for Justice. The Walk for Justice – Highway of Tears started June 21st on National Aboriginal Day, when a group set out from Vancouver to walk across Canada to raise awareness for missing and murdered Aboriginal women throughout the country whose cases have not been pursued aggressively or at all by law enforcement and have not received justice. Of the many that began the walk, six arrived on September 26 for the Rally on Parliament Hill. Iskwew played that night in solidarity with the cause.

“They arrived in Ottawa yesterday, which is our capital, it’d be like Washington DC for Americans, to raise awareness. There’s over 3,000 murdered or missing Aboriginal women in Canada. Historically, in the last century, when native women have been murdered or gone missing, often the police, the court system just dismisses it. They don’t investigate. Even in times when they know who murdered the women, they don’t pay any attention, they’re just like, ‘Oh, it’s just a native woman who cares?’ type thing. Yeah, so these people marched across, walked across the country with lots of support.”

This may be hard to believe in the greater context of Canada’s reputation as a country who provides healthcare to her citizens and has every right to look down her nose at the more widely-known human rights abuses that her neighbor is world-famous for, but cursory research reveals the appalling truth of the matter. Canada continues to be negligent in pursuing perpetrators of crimes against Aboriginal women and it’s time for this to change. 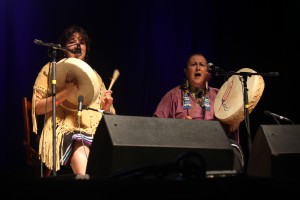 The failure of local and federal government in these instances points to a greater ignorance in Canada and worldwide of First Nations’ cultures. The fact that mainstream media has been so slow to pick up on these stories is a symptom of the problem. Part of what Iskwew is doing it shedding light on the positive aspects of Cree culture where only total ignorance was before.

As to whether she feels that what Iskwew does is political, Sandy said, “ We have many educated people holding their PhDs and working as doctors and this and that who are changing how society views First Nations people, but largely people still think of them as the drunks down on Skid Road, and that’s all part of… So, in answer to your question earlier of ‘Is there anything political of what we’re doing?’ — Yeah.

What we’re dong is politically showing people the pride in our culture. The fact that we come out and wear regalia, just to show very basic cultural teachings, we’re trying to present through the songs. Those two girls that were with me? They have another group and that was their first gig with me.

So that’s what we do, and when we get to go play international festivals it’s really important because, you know, one of the girls that sings with me, she went to Italy and some guy said to her, ‘Where are you from?’ and she said, ‘Well, I’m Cree Indian from Canada,’ and he was just aghast, he was saying, ‘No. They were all extinct. They don’t exist,’ and she’s going ‘You’re crazy!’ You know?

But there’s crazy ideas out there, so especially if we’re on the international stage, we’re trying to show the very best of who we are. And in Canada, half of our work is in what we call Indian Country, which is all of the country except dominant society doesn’t see us. So we perform for other native people or we perform for dominant society, and so when we perform for dominant society, it’s the same thing again. We’re trying to show the really fantastic things about our cultures, our collective culture which really concerns community, egalitarianism to a certain extent, just pride, culture, the interconnectedness of all life and that we’re interconnected with one another — things like that.”

At RWMF, musicians meet and play together in scheduled workshops that are open to anyone with a festival ticket. People from cultures the world remains largely ignorant of come together to share musical knowledge and oral traditions that span centuries in an environment of respect and admiration. Being at RWMF is like being on another planet — one on which dominant culture does not have the dominant voice. The feeling that you are in a very special place with some very special people is one that I couldn’t shake during my stay in Borneo, and is something Sandy and I connected over during the conversation we had.

And it was during a percussion workshop in the Iban Longhouse on the grounds of the Sarawak Cultural Village that Sandy connected musically with some members of the Warsaw Village Band. She said of the experience, “It was all people with different kinds of frame drums, and I forget what those guys [from the Warsaw Village Band] were playing and the Iranian woman [Mamak Khadem] started singing and I started singing a harmony with her and then another guy jumped in and it was magic. It was so cool.”

Based that experience, members of the Warsaw Village Band reached out to Sandy. She recently recorded tracks in Vancouver that have been sent to the Polish band and will be incorporated into an upcoming release — and so the connections made at RWMF continue to bear fruit.

[Note: Kate’s trip to Sarawak and the Rainforest World Music Festival was sponsored by the Sarawak Tourism Board.]