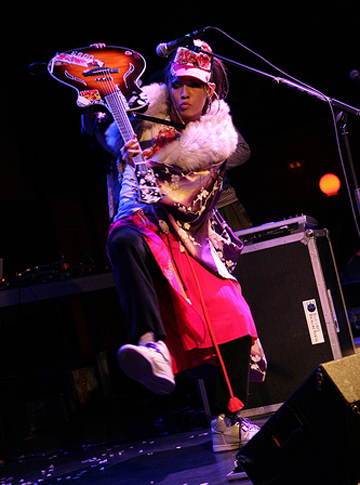 Photo and Feature Photo of Miyavi
in Barcelona: alterna2

Thirteen years is enough time to build an impressive set of skills and unique sound. The 28 year old guitar player bills himself on his MySpace page as a Japanese Samurai Guitarist.

You might think he’s playing bass at first. You might be surprised that someone who cuts such a sexually ambiguous figure growls more ferociously than John Spencer. Whatever he’s doing, it’s exciting. It’s pure rock and roll that will pull you out of a funk. It’s contagious and inspired.

Appearances in the US are few and far between for the artist who has a habit of canceling when it’s time to come to America. He signed with EMI in January and kicks off the Neo Tokyo Samurai Black World Tour in San Diego in June with scheduled dates on both coasts and in Texas.

If the following videos of the androgynous Miyavi make you think of the guitar and rock in a new way, check out his Single Collection

on Amazon, or iTunes’ selection including his latest release Survive.

You can catch up with Miyavi’s whereabouts and releases on his website.

If you’re not a guitarist but you play one on TV (or Playstation, as the case may be), check out Ian MacKenzie’s Guitar Hero on Tour: Rocking Out Through the Decades.

If you’re planning a trip to Japan, you’ll be well served to check out MatadorNetwork’s Japan Focus Page where you can read articles with ideas for trips, festivals, food, and things to do in the land of the rising sun.