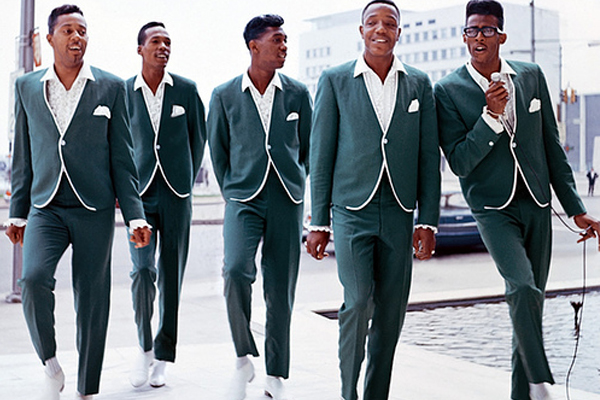 My Girl: The Very Best of the Temptations: evanosherow

The new release Motown Around the World: The Classic Singles

is a 2 disc compilation of classic Motown hits that were made to reach a European audience. They are all chart topping classics with a twist – and that twist is either Italian, German, Spanish or French.

In the 1960’s, a movement was afoot to bring rock and roll to the world. Now, whichever country we’re in, we’re never surprised to hear rock in English come through the speakers in cabs, restaurants and airport bathrooms, but it wasn’t always a given that audiences would accept music that was not in their own languages.

Producer Harry Weinger said of the recordings NPR’s All Things Considered May 29 in an interview with host Guy Raz and Otis Williams (the only surviving member of the Temptations):

“[T]hese singles were really only produced for the local market. And it was tough to find some of the masters. I mean, frankly and I’m honest in the liner notes for a few of the songs, we had to go from the original 45, the vinyl. We had to clean up the vinyl. Because the tapes would have been shipped to Germany or to Spain or to Italy, the local office there, and some of them didn’t come back.”

The interview along with samples of the songs can be streamed at NPR.com. The Supremes L’Amore Verra (You Can’t Hurry Love) is available at the page as well as the Italian version of MyGirl embedded below.

Motown Around the World includes foreign language versions of songs by the Supremes [L’Amore Verrà (You Can’t Hurry Love)], Stevie Wonder [Mi Querido Amor (My Cherie Amour)], the Temptations [Mein Girl (My Girl)], the Four Tops, Edwin Starr, Martha and the Vandellas, The Miracles, the Velvettes [Le Hoky Poky (Hoky Poky)], and Jimmy Ruffin [Se Decidi Cosi’ (What Becomes Of The Brokenhearted)], and even a couple of later hits from Jermaine Jackson and Smokey Robinson thrown in for good measure.

Maybe these Motown hits will help you kick start your languages studies, but if you’re looking for other practice materials online, check out 8 Free Online Resources for Learning a New Language , and be sure to peruse MatadorNetwork’s Focus Page for Language Learning.