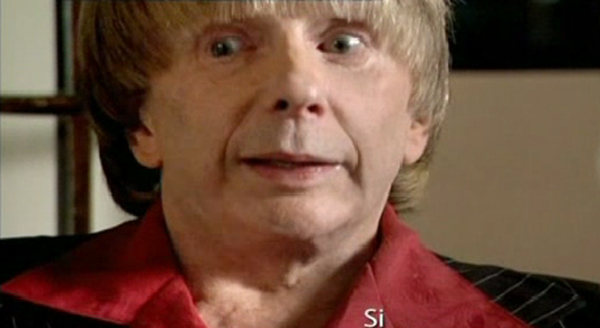 Phil Spector as seen in the film. Photos in this article are stills from The Agony and the Ecstasy of Phil Spector.

Over the last couple weeks of BAFICI, I have seen upwards of 20 movies, but the one that had me digging for my pen and scratching out notes was veteran documentary filmmaker Vikram Jayanti and producer and editor Anthony Wall‘s project The Agony and the Ecstasy of Phil Spector.

Interviews with the music producer were originally shot in Spector’s home for the BBC’s Arena and originally aired on BBC Two in October of 2008.

Spector is a huge subject – from his ‘wall of sound’ to his wall of ego, his self aggrandizement seems to know no bounds. Spector harbors hatred for Tony Bennett, contradicts himself without seeming to notice or care, and his impersonations of John Lennon sound like Rocky Balboa. When asked about the sadness inherent in art, Spector’s answer is about the pain of critique and devastation in lack of adoration. 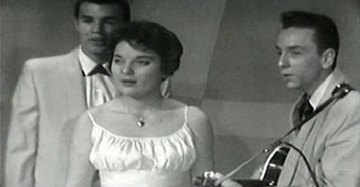 Spector (right) with The Teddy Bears

Interspersed with the interview is performance film of The Crystals, The Righteous Brothers and Tina Turner while gushing praise runs at the bottom of the screen like subtitles. When the footage stops, the songs go on over trial footage of bullet trajectories, surveillance video, testifying ex-girlfriends and repeated close ups of Spector and his ever-changing hair.

The interview was shot while Spector’s first trial for the murder of Lana Clarkson (that ended in a mistrial) began. He looks limp and bedraggled and talks with the slurring speech of a stroke victim over subjects as diverse as his high school years, his father’s suicide, and his process in producing some of the best known records of the 20th Century.

He compares himself to DaVinci, Modigliani, and Duke Ellington and bitches that he was never given knighthood (I think you have to be British for that) like McCartney or an honorary degree like Bill Cosby.

It is an unsettling film as we delve into the thoughts of a man who believes he has been wronged by society. He says on more than one occasion that the press surrounding the trial is the result of negative public perception, creating several analogies he seems ill equipped to analyze and puts himself into the category of other ‘maligned’ stars such as Miles Davis and Woody Allen.

I don’t know how exactly the film reaches the crescendo that had me wriggling to get away, but The Agony and the Ecstasy is a captivating portrait of an incredibly isolated person who fails to see that there is a pinnacle of fame for a record producer – a job that is inherently behind the scenes – and a depressed and desperate old man in hot water.

If Spector isn’t laid bare in this film, let’s hope that some things will forever remain private. Seeing this on the big screen is a revelation.

Want to know how to make your own travel documentary? If you need motivation, have a look at Julie Schwietert’s MatadorTravel blog about God Grew Tired of Us.

If you’re a fan of the documentary genre, you’re likely to be delighted by The Recess Ends, available in its entirety on MatadorTV.