I wanted to go because it’s run by an Argentine, and I’ve been feeling a little homesick for Buenos Aires. Outside, there was a mural of a couple in a tango embrace next to a jumbo bottle of wine. Inside, we sat next to a stuffed bull head that I ran into more than once getting up from the table. The place was packed with sweet details, like miniature people sculptures hanging from the ceilings, a toucan napkin holder, and life sized sculptures of townspeople. 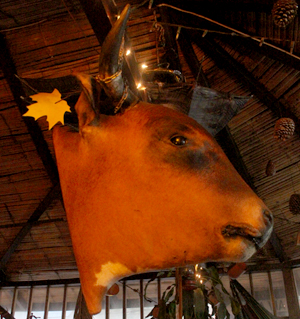 We were greeted promptly by our server who asked our language preferences and then delivered little canvas bags that were our menus. Inside were the wine list and three cardboard dice that listed the options, one per side. The Spanish language ones were full of double entendres and puns, the English, just a basic listing.

We picked the tabla (a selection of meats and cheeses with olives) and chorizos (sausages of four different types including a chicken sausage). Chad picked chicken for the main course, and I chose the ribs.

Before we got our appetizers, the waitress delivered bread and sauces with herb butter. She said one was chimichurri, but in Buenos Aires, we know it as provenzal — it’s parsley and garlic in oil. The other she said was ají (hot pepper), and it came hotter than the average Porteño would be comfortable with. 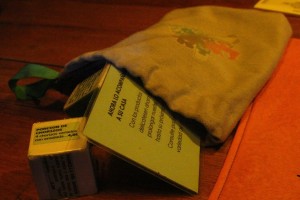 The sausages were tasty, if a little lukewarm, and the tabla wasn’t quite what I was expecting, but was full of flavor. The real surprise for me was the ribs — they seemed more an American style beef rib than anything I ever ate in Argentina, but I’m not complaining. Grilled with rosemary oil, the flavor was steeped through, though the beef was pink in the middle (the way I like it, and the way it’s impossible to get it in Buenos Aires, in my experience). It was served with a small pepper stuffed with provenzal and a couple potato slices with a tasty pimento sauce on top. Chad’s chicken was tender and served under a pile of peppers and onions. 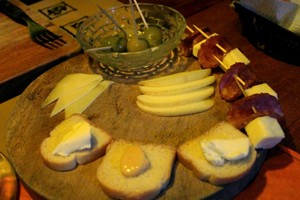 It took us nearly two hours to finish it all. We took our time talking, getting lost in politics and ideas about sustainability. When we left, the owner was standing in the doorway looking out. I asked him how he ended up here and he said that he’s also a psychologist, and that he came to Ecuador to work in Riobamba. Originally from Bariloche, he said he stayed for the weather. Whatever made him stay, I’m a little jealous that Baños got Quilombo and Buenos Aires did not. It’s not so easy in the big city to get such flavors, presented in such a thoughtful way in such a quirky atmosphere.

If you’re on the cheap, you can still stop by for a snack, but if you’re in the mood to splurge in Baños, this is a good place to do it. We got two appetizers, a liter of Argentine malbec, and two entrees for US$65 — a pricy night out in Ecuador, but a welcome change from the florescent strip lighting and bare bones meals we’d been eating since we arrived.

New Jersey sandwiches are an art form. These are the 9 sandwiches to try.
Ozarks cuisine is a blend of the best of Midwest and Southern food
The difference between butter chicken and chicken tikka masala
Amtrak food and drink options: Everything you need to know before your next train trip
Searching for the best Mexican food in Texas? You need to visit El Paso