THOUGH MALAYSIA IS an incredibly diverse country, the RWMF made it even more so — at least in this corner of Sarawak where there were performers from all over the world. This 14th year of the festival ran July 8-10 and featured daytime workshops and night time concerts all in the Sarawak Cultural Village in the rainforest — the grounds reflecting the architectural heritage of the area with traditional structures from Borneo.

The variety of cultural traditions I saw at RWMF electrified me. I was on a natural high as the crowds ebbed and flowed between the two stages. To see Warsaw Village Band, Agung Beat (of Malaysia), and Kamafei (of Salento, Italy) update traditional sounds with modern influences got me excited. But there was plenty for die-hard traditionalists to enjoy and even a full-on stage show with numerous dance numbers by Kenge Kenge Orutu Soundsystem (of Kenya).

Overall, I was overwhelmed by so much great music within the course of just a few days. My eyes have been opened to a new way of experiencing the world. I guess that’s kind of the point: music is a common language, something we can all share, even if some things are lost in translation. The sharing of knowledge and mutual respect I saw among the performers gives me hope, and I can’t help but feel that the crowd picked up on it, too.

So without further ado, here is one photo from each group that performed over the course of the three day festival in chronological order and a little information about the bands.

*Kate’s trip to Sarawak and RWMF was sponsored by the Sarawak Tourism Board, but her impressions and opinions are her own. 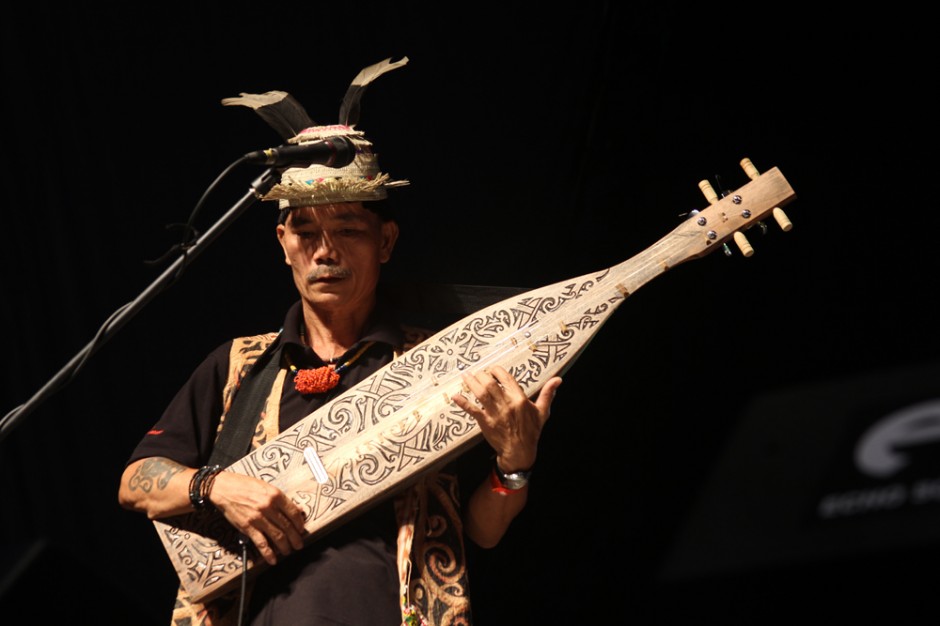 Masters of the Sape

This is Mathew Ngau Jau, guest starring with Masters of the Sape, the opening act of the festival. The sape (pronounced sah-peh) is an instrument that originated in Central Borneo. It is a high-pitched string instrument carved from a single piece of wood, and in practice its sound undulates and flourishes and might remind you of flowing water. 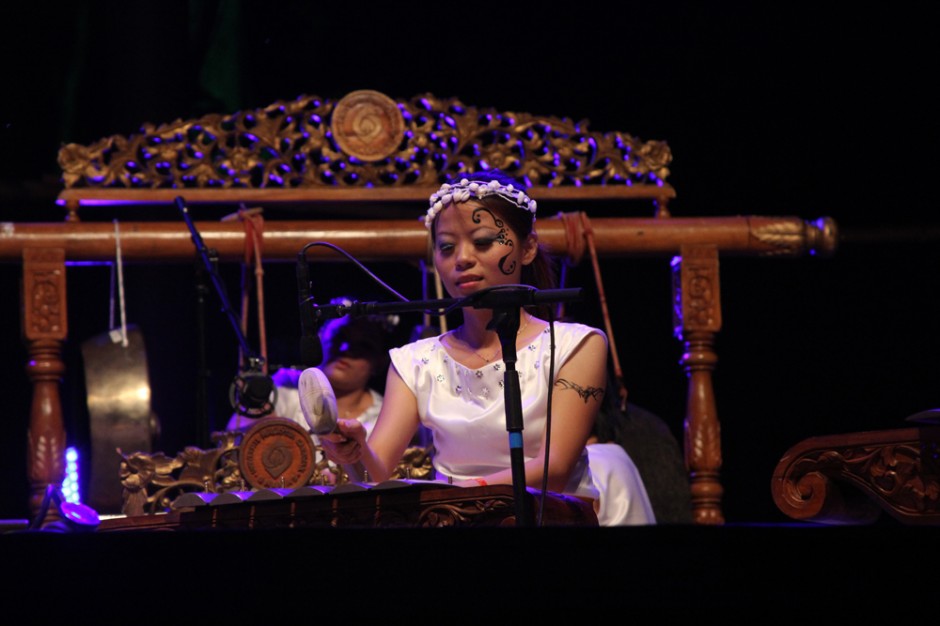 Amedah Gasin of AgungBeat is pictured here playing the saron. Amedah is also the makeup artist and choreographer of gamelan ensemble AgungBeat, a group of music students from University Malaysia Sabah. They play new arrangements of traditional Sabahan music as well as original compositions. My spirits were lifted by their multilayered tones and uplifting tunes, as jetlagged as I was. 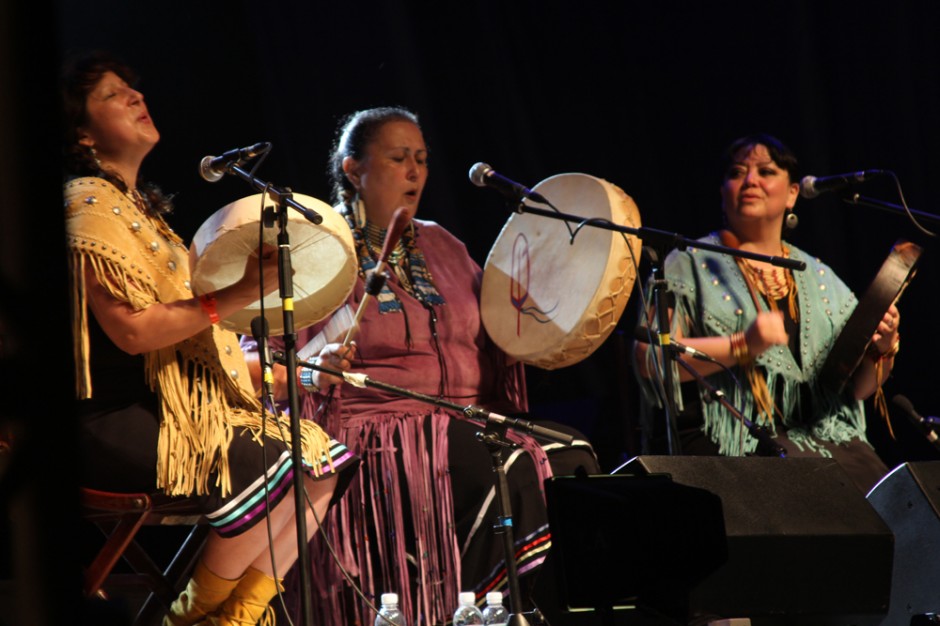 Iskwew, led by Sandy Scofield (center) is a trio from Vancouver who play traditional and original compositions in the Cree tradition. Their harmonies make all the hair on my arms stand on end. Their sound is simultaneously vividly alive and haunting. 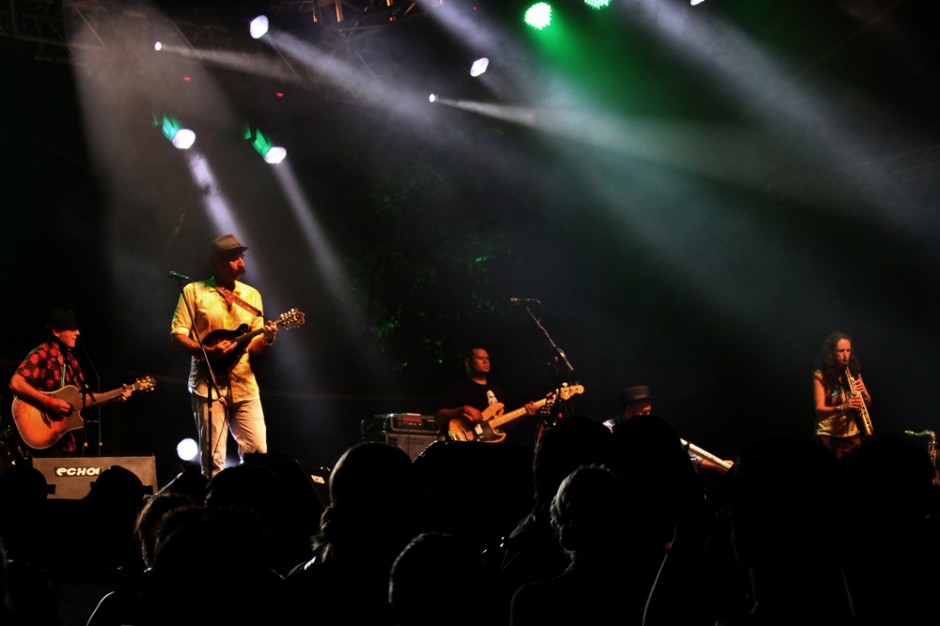 Kamerunga of tropical Northern Australia combines traditional Australian and Celtic music with influences from all over the world to create a deep, full sound. The sax player Andree Baudet is ace. I loved hearing her play with the band as well as in one of the daytime workshops, and the band uses virtuosity with a variety of instruments and traditions to pump out highly danceable rock with a traditional twist and many jazz elements. 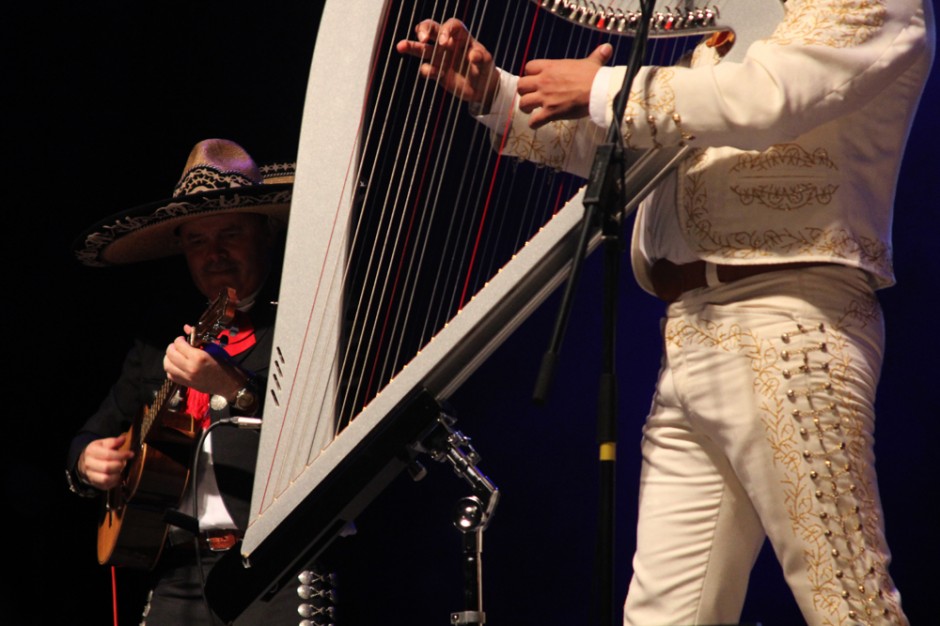 Victor Valdés Trio rocked the stage the first night of the festival with traditional mariachi style and torch songs. Valdés (pictured here without his handsome face, unfortunately) is known as "the Mexican" in Sydney, where he now makes his home. He didn't start playing the harp until he reached his 20s, but is a passionate and fast learner and plays the harp in styles that go beyond the traditional into jazz, rock, blues, classical, and experimental. On the left is Ivan Vivas. 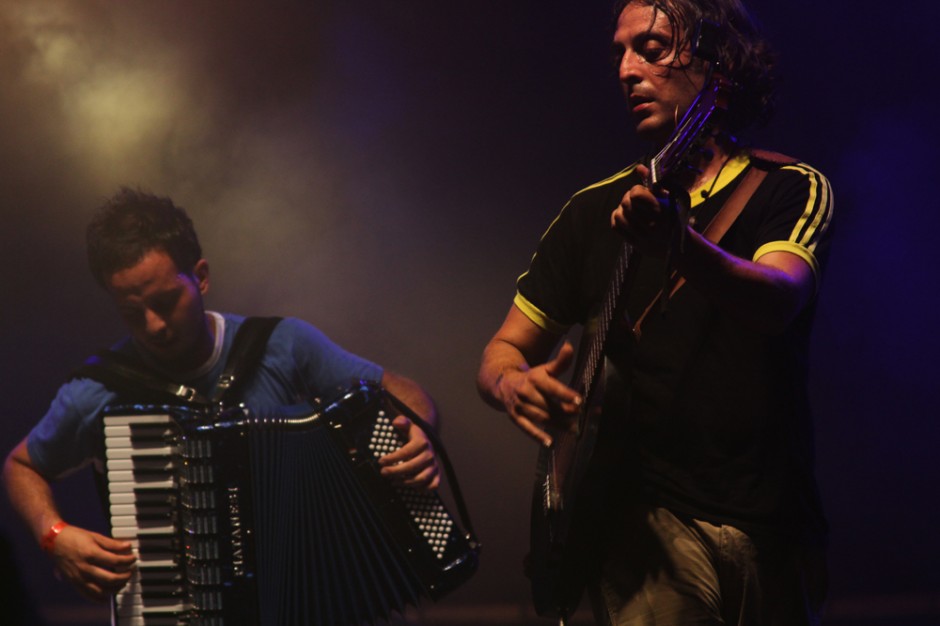 KamaFei means flowing heat, and this band illustrates this idea not only with their energetic, furious sound, but through the fusion of modern influences like rap and reggae with Southern Italian "pizzica-pizzica" as an ever present element. The crowd went wild for KamaFei on the first night of the festival. 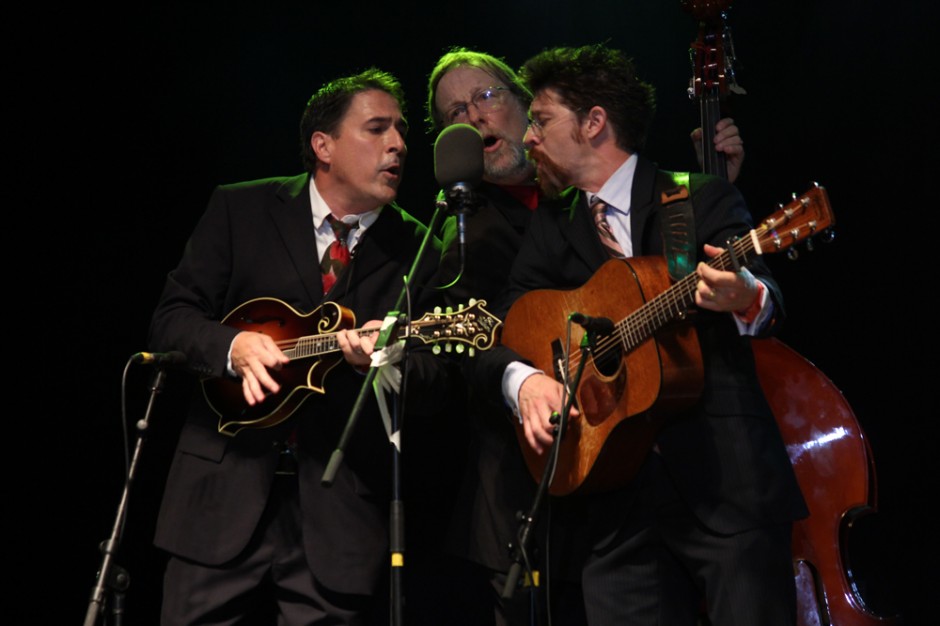 Blue Canyon Boys had to bring it two days early as they took the slot of Malick Pathe Sow (whose instruments were misplaced in transit), but bring it they did. Coming from Kentucky, I've heard a lot of Bluegrass, and these guys have got the goods. Fast moving fingers, never a harmony out of place, and an old school sound, I was dancing between shots and missing home. 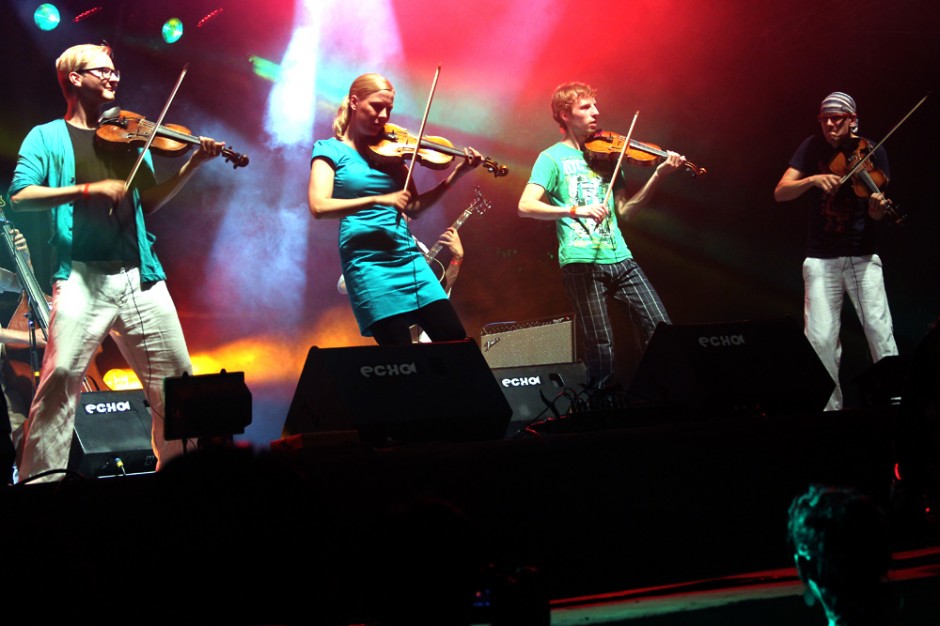 Frigg call themselves Nordgrass -- they are a group of string players (including 4 violins) from Norway and Finland who fuse traditions of Norse music with American Bluegrass to make symphonic folk that crosses any border. They closed the show on Friday night at RWMF. 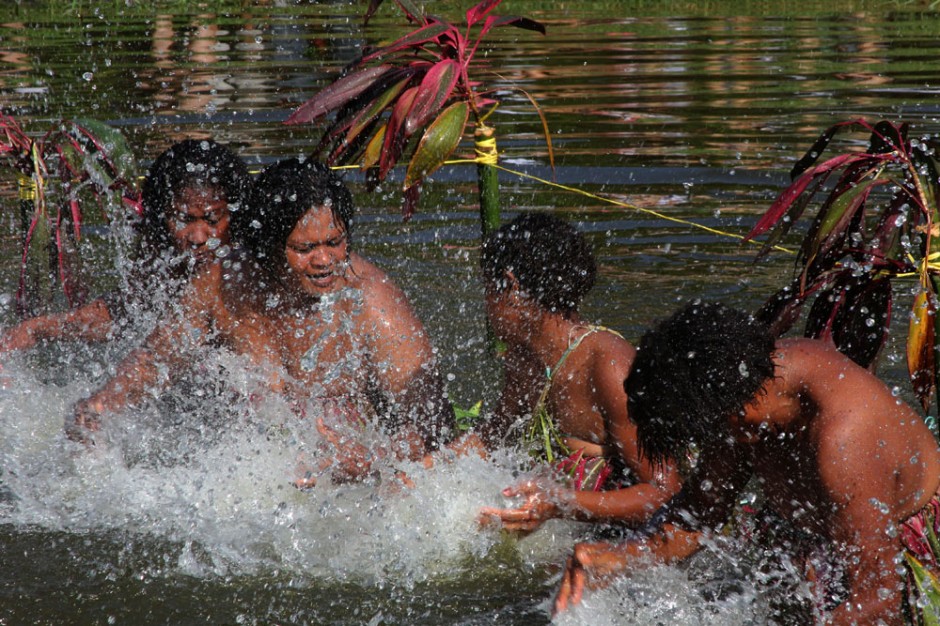 Leweton Women's Water Music performed more than once each day of the festival on the grounds of Sarawak Cultural Village. Audiences were riveted. I'm sure for most of us, it was the first time we'd seen water used to create harmony in a deliberate fashion, but the music of water is within all of us. From the Isle of Vanatu, north of Australia, Leweton Women's Water Music brought an elemental tradition to RWMF. 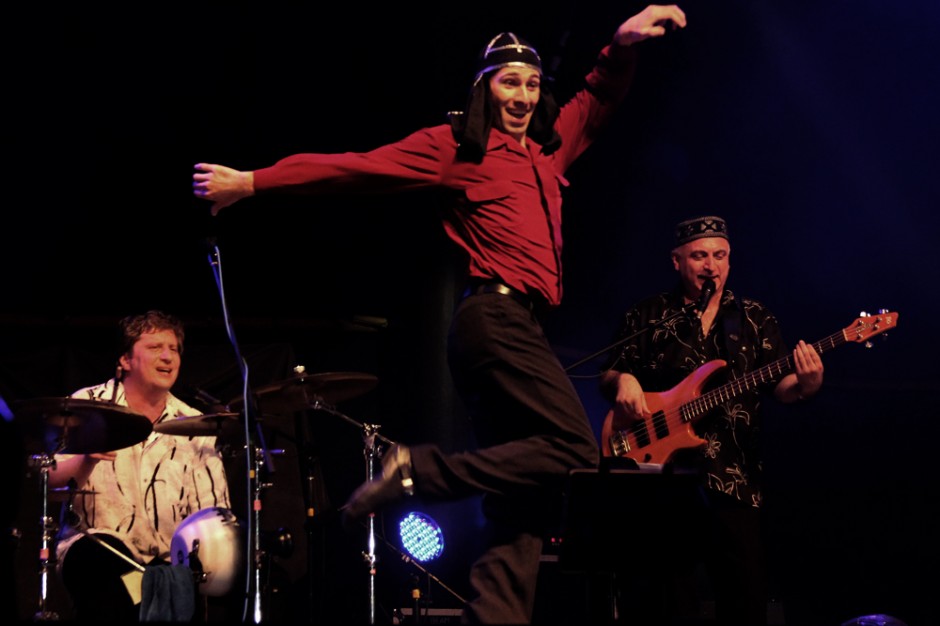 The Shin brought an exuberant Georgian sound to open Saturday night's show. As the sun went down the stage came alive with the blending of deep harmonies, using traditional Eastern European sound with modern folk tunes and throbbing beats. Their dancer blew my mind -- photos can't do justice to the way he seemed to fly. 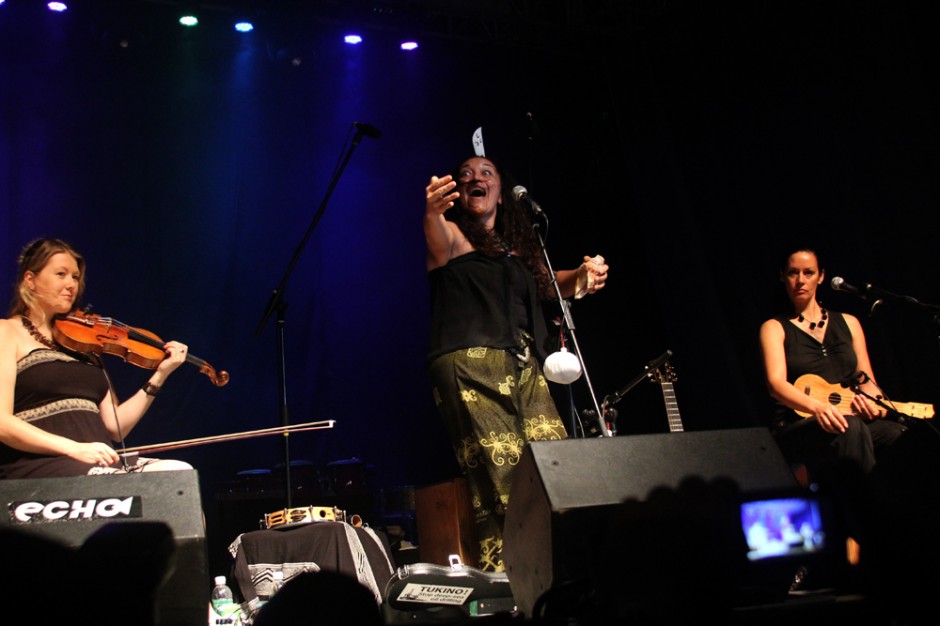 Pacific Curls combine gentle and fierce sounds of Maori, Polynesian, and Scottish traditions into a new-world sound. Ora Barlow fronts the trio, her voice at times sultry, at times pushing the upper ranges. This band may defy classification, but they are truly worth a listen as they combine 15 instruments with virtuosity and Te Reo Maori, Rotuman and English lyrics that embrace and share a living force that spans world music sounds from many backgrounds. 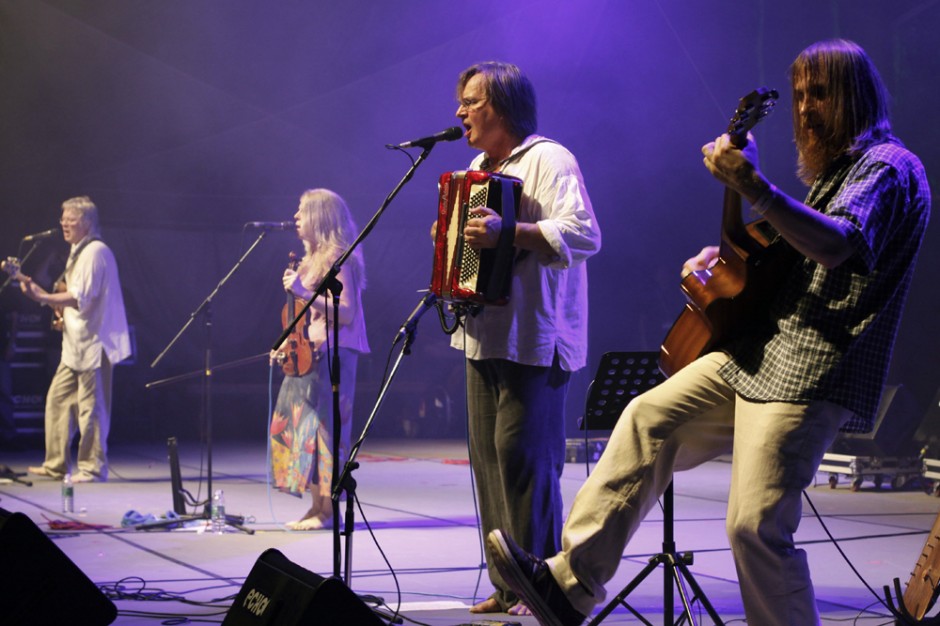 Ilgi has been performing Latvian folk for 30 years. Their many voices in harmony express a deep ritual of sound through original compositions in Latvian. In the beginning, violinist Ilga Reizniece and her band scoured the countryside for traditional songs that had been all but lost in the repression of the Latvian traditions in the many invasions and regimes imposed from outside. They worked at building a base of songs and recording history simultaneously. Now the band calls themselves post-folk, melding deeply rooted traditions with the ensemble's creative vision. Photo: LucyAnnePhotography, courtesy of the Sarawak Tourism Board. 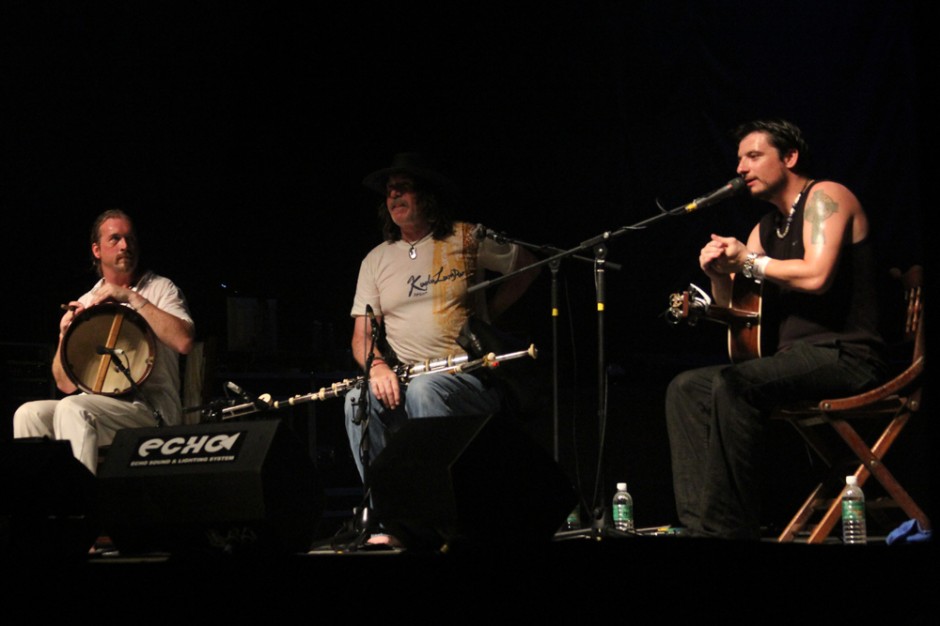 Paddy Keenan is tongue in cheek when he says Irish music is spreading like a plague throughout the world. I know it's not the way he really feels because I saw him play for thousands of excited spectators on the second night of the Rainforest World Music Festival. Paddy Keenan Trio put on a riveting, tight set of traditional Irish songs with a few contemporary rock classics thrown in. If Irish music is a plague, I'm glad to be infected. 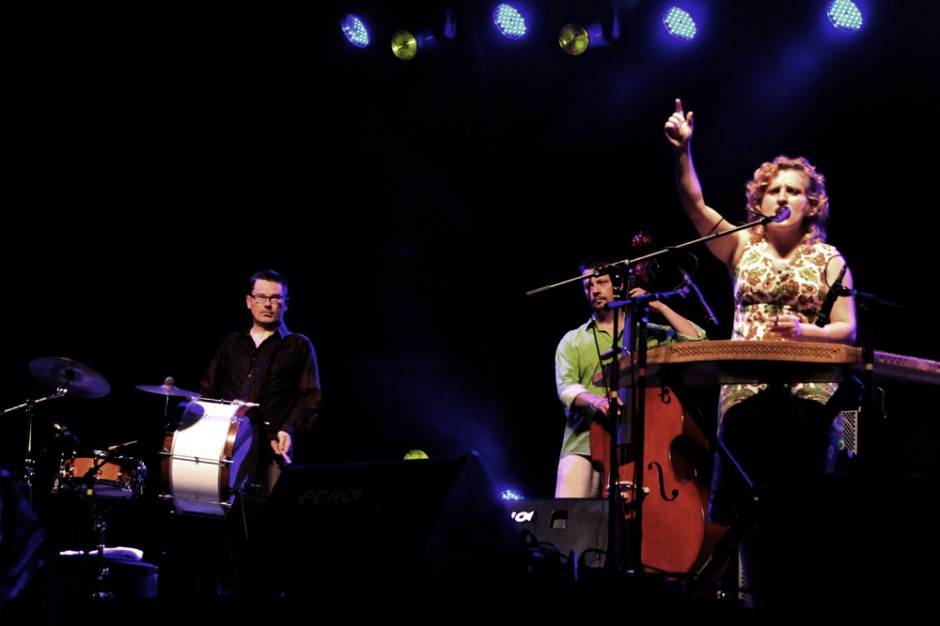 Warsaw Village Band make Polish folk rock. The band went in search of musical roots by asking elders door to door to share traditional songs they remembered. This solid foundation informs their fusion of Polish folk with modern showmanship and sounds as diverse as rap, rock, reggae, and blues. I'd been looking forward to this band and wasn't disappointed by their exuberant sound. 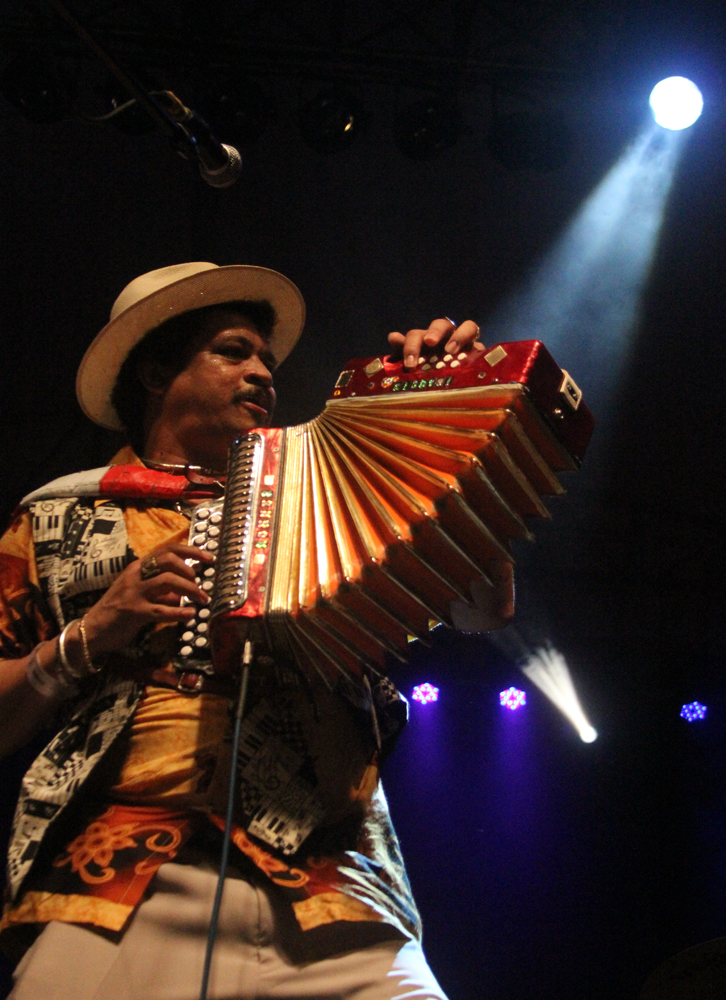 Joaquin Diaz and his band had everybody shaking it on day two of RWMF. Diaz hails from the Dominican Republic and is a showman to the bones. He started playing accordion at the age of nine and his virtuosity shows in the ease with which he expresses himself, singing, playing, and dancing. His band of expert percussionists, guitar, and backing vocalists seemed never to stop smiling during the show and the joy radiated to the audience who danced non-stop throughout the set. 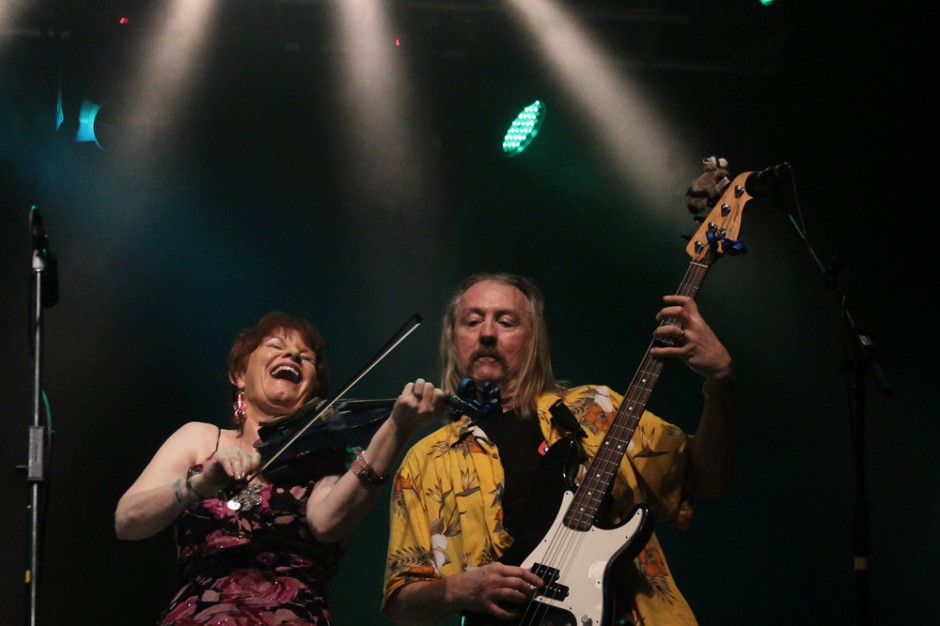 Lisa Haley and the Zydecats

The closing act on Saturday night, Lisa Haley and the Zydecats would have blown the roof off if there had been one. This explosive Zydeco five piece band had everyone jumping (themselves included). Haley's vocals and master level violin playing stole the show, but each member gave 100% to end Saturday's musical trip around the world. 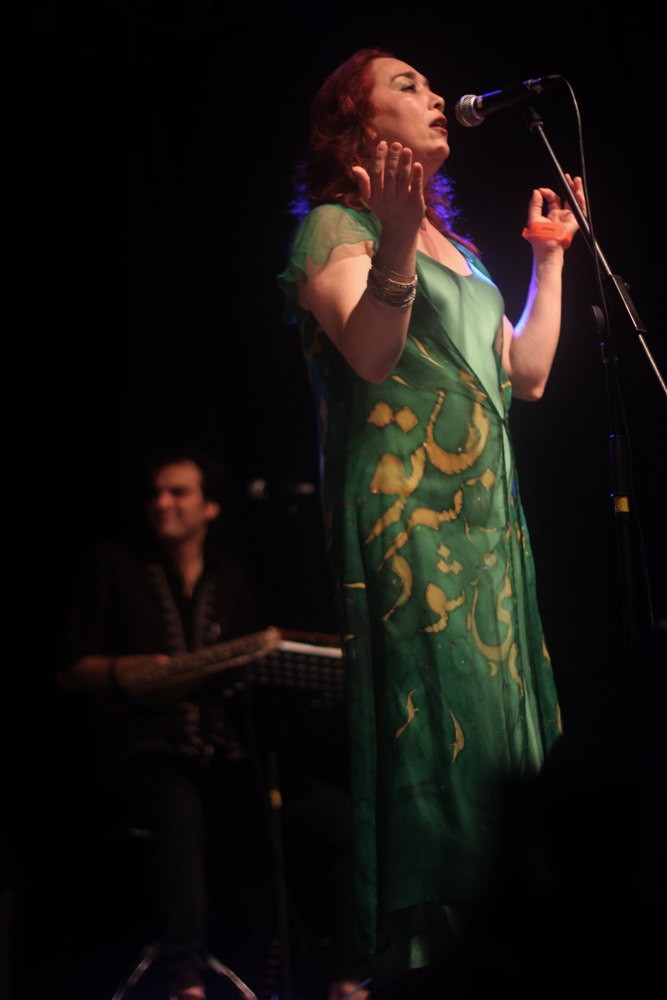 Mamak Khadem brings sacred and ancient Persian poetry to life. She and her band opened Sunday's show with a profound sound rooted in the traditions of Iran. A woman in the front of the crowd was crying with emotion. The tender and fierce voice of Khadem was backed up by a group of expert players and I several times was compelled to take a deep breath, close my eyes and simply feel. 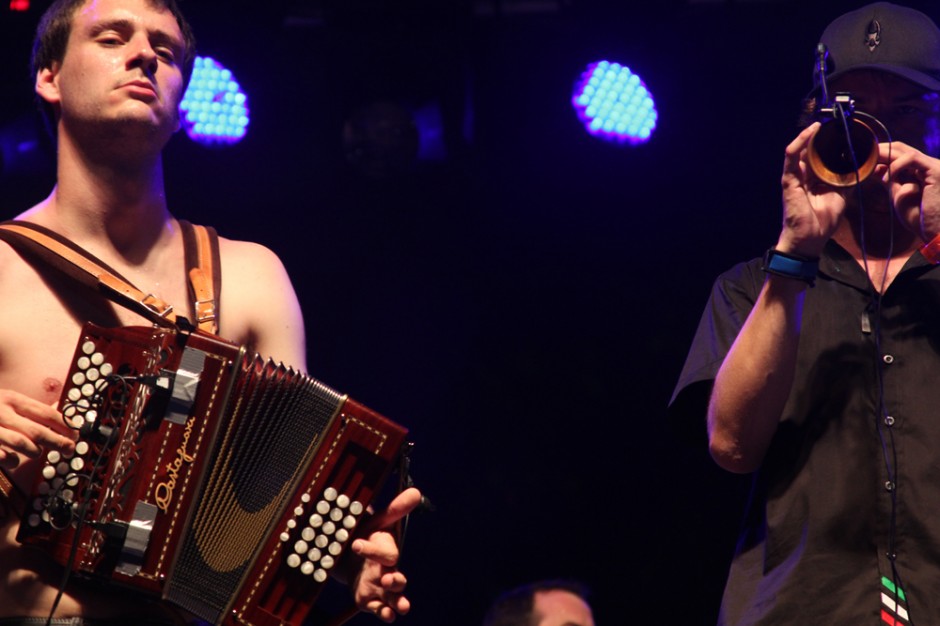 Startijenn is a Britannic band hailing from the Northwest of France. I didn't know what to expect, but once they started I felt like I'd been called to arms. The tonal variety expressed in such tight formation made for a riveting show. I wanted to run, I wanted to dance, I wanted to shout for joy. Startijenn got me where I lived with a form of music I didn't know I liked. Don't call them French. They're Breton. 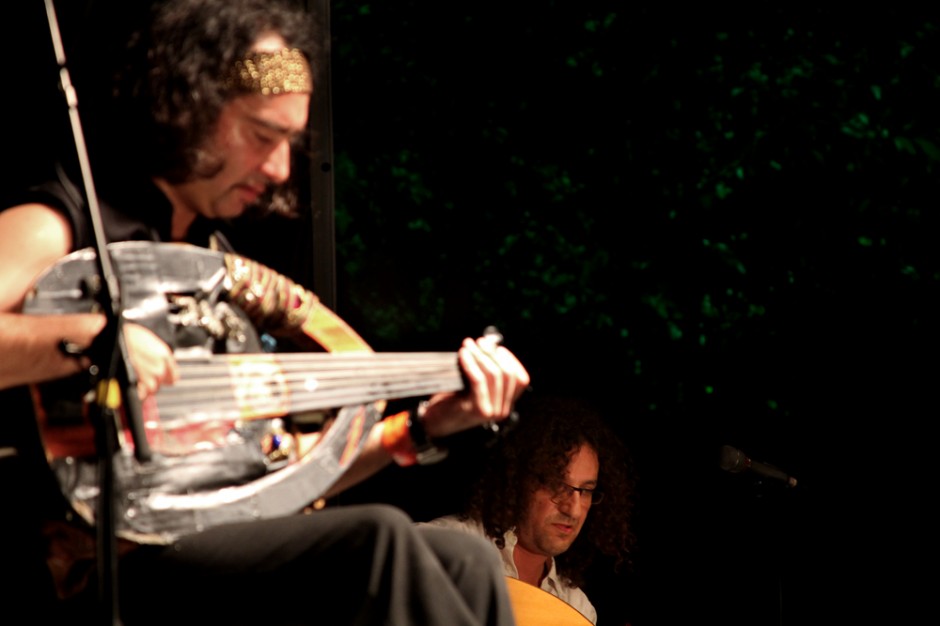 DoOud is a pun: dude, two oud. But they're a lot more than that. Currently living in Istanbul, DuOud are from Algeria and Tunesia and combine traditional North African sounds with modern technical elements like looped beats and sound bending pedals. The effect is at times trance, at times rock, but as a whole, very original. 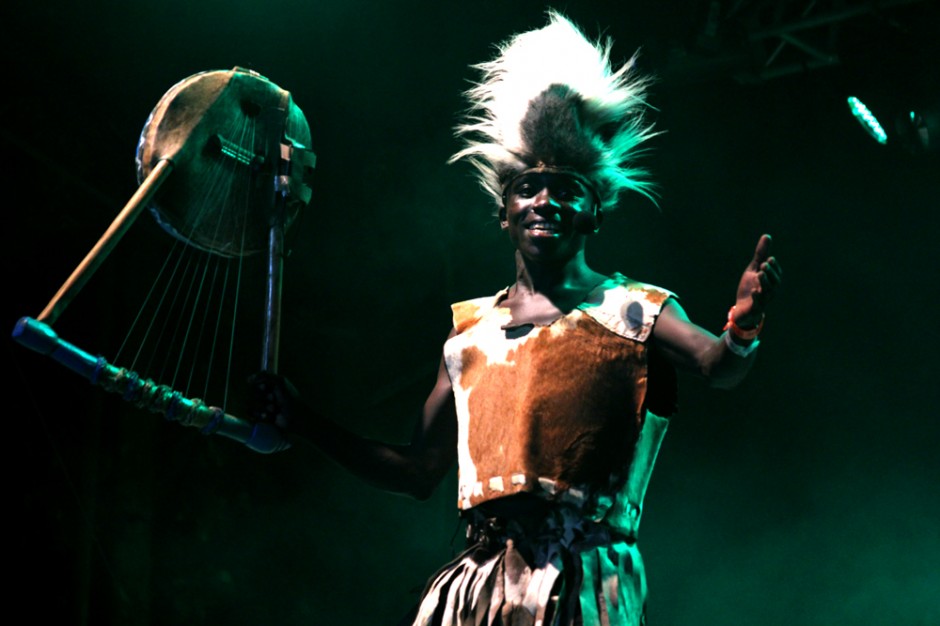 Kenge Kenge Orutu System was one of the most anticipated bands of the entire lineup, and with good reason. There wasn't a stage show at RWMF to rival the one put on by this band of the Kenyan Luo tradition. There was even a morality play amongst the undeniable rhythms that had the crowd jumping and crying out for more at the end of their set. Pictured here is Gabriel Odhiambo Oduor, nyatiti player, dancer and singer. The nyatiti is an 8 stringed Luo instrument. 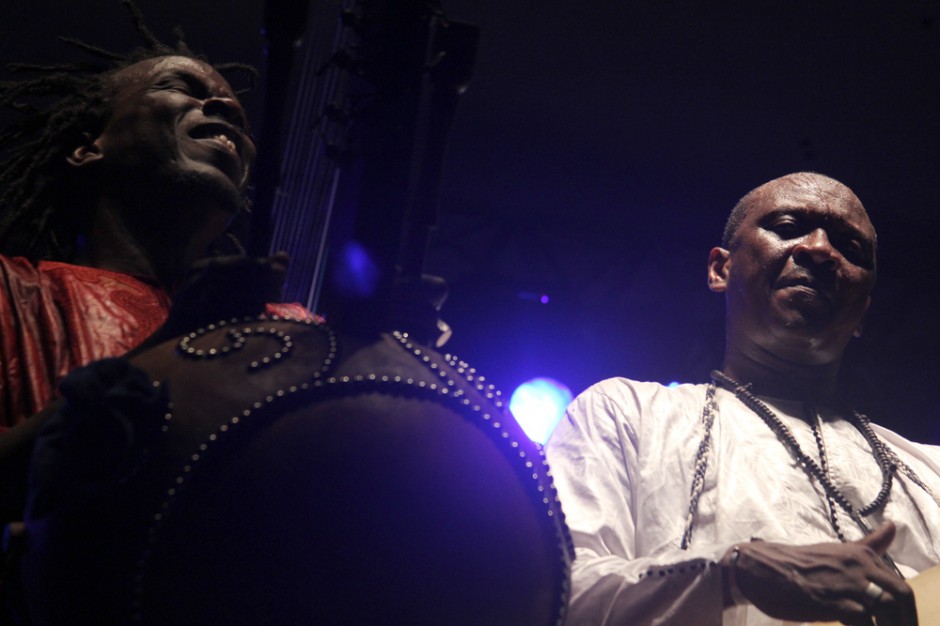 Malick Pathe Sow is a band in the Senegalese Laawbe tradition. Named after the frontman, the tranquil sounds of this band seem to be all about love, but I have to go by the sound alone -- I couldn't understand a word. After the explosive show put on by the previous band, the soothing and beautiful show put on by Malick Pathe Sow was just the ticket to cool off an overheated audience. I was energized and brought back down to earth by this set. Pictured here are Bao Sissoko (left) and the man himself, Malick Pathe Sow (right). 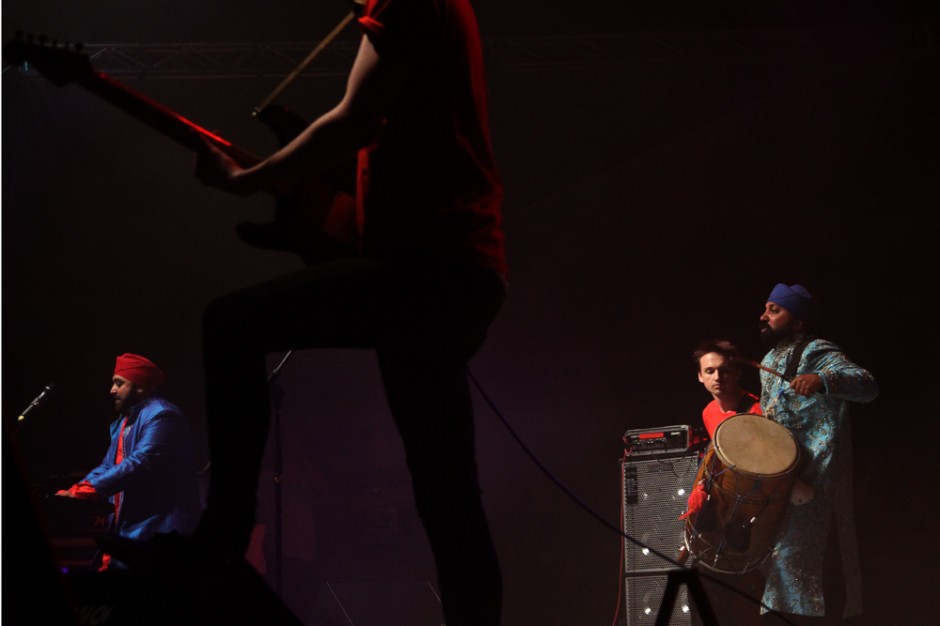 Kissmet fuses Bhangra with a classic rock sound to create something entirely different. With a message of unity and love for all cultures, Kissmet set the crowd on fire with their sound and message of hope. Hailing from the UK, the band is fronted by brothers Ron (left) and Buz (right) Singh of Sikh heritage. Their set was a crowd pleaser of the highest order and a great choice for a closing act.

Palm oil is in everything and it’s killing rain forests, endangered species and people. Here’s how.

What do your tattoos mean to you?

Sarawak: Trekking in the Kelabit Highlands

How to: Get off the tourist trail in Southeast Asia