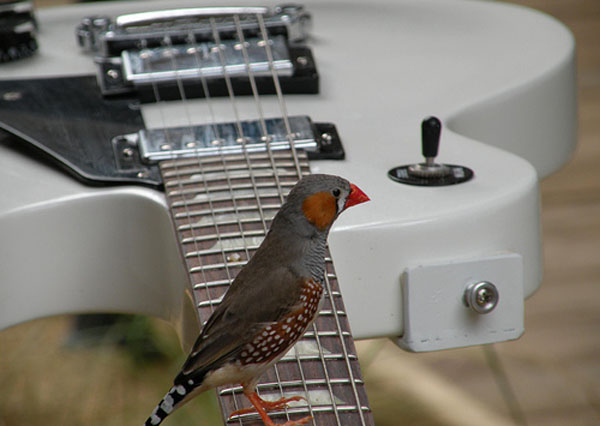 London: the undisputed world capital of rock and roll. In many ways, it’s like any gig for a new band. There’s some nervous tuning up followed by a lot of preening.

They sing. They tap their feet. The guitarist – clearly a fan of Led Zep – moodily plucks the strings of his guitar then starts beating the crap out of it with a stick. The singers show off and hardly anyone pays attention to the drummer at the back, tapping away at the cymbals.

But this isn’t any old band playing at a Camden dive venue These are birds: Zebra finches to be precise. Playing guitars. In an art gallery. It’s gloriously, wonderfully weird.

This, French artist/composer Céleste Boursier-Mougenot’s first solo art show in the UK, became an overnight sensation when it opened at the end of February and a Youtube clip is racking up the hits.

Essentially the most rock and roll aviary in the history of the world, plugged-in Gibson Les Pauls are installed around the Barbican’s Curve gallery. Upturned cymbals are used as birdbaths, feeders and water bowls while mic stands make perfect preening perches. Nesting boxes line the high walls and the floor is covered with sand and twigs. As the birds ruffle their feathers, shuffle, build nests and land on the guitars, every sound their tiny feet make is amplified through the speakers.

Whereas most bands struggle with that difficult third album, here all it takes to make an opus is a bit of hopping on a fret board, the arrival of an unwanted love rival and a ‘get off my land’ twangy skirmish on the strings. 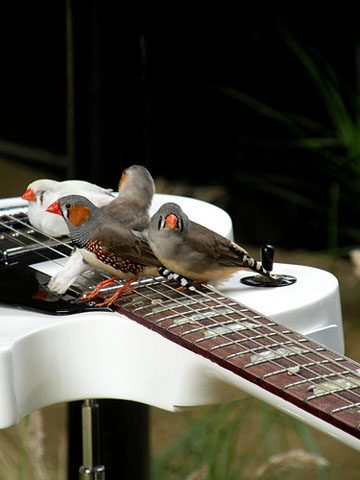 The birds themselves are trained professionals that came through an agency that provides animals to the film and entertainment industries. According to gallery staff, the birds were a bit British and standoffish at first, but now they’re hanging out like friends and there’s even been some romance. Last week when an egg was laid, the gallery had to be shut down and bird experts were called in. The egg is now being looked after by a friendly finch elsewhere.

The exhibition is a joy to walk around. There’s no sense at all of being trapped, just a lovely liberating feeling of freedom as twittering birds fly past your head.

What these tiny finches couldn’t teach you about rock and roll isn’t worth knowing. Cleaning bird shit off the instruments is a regular job for gallery staff and not even The Who’s bad boy Pete Townshend was that rock and roll with a Gibson.

If you’re thinking of taking the show on the road, have a look at 5 Things You Should Know When Traveling with Musical Instruments.

More bird inspired music for you? Bird Song: Can You Hear the Melody of Nature? has birds making notes in a different way.

What did you think of this article?
Meh
Good
Awesome
Bookmark
Posted In
Art Music

We went on the Bon Jovi cruise, and it turns out theme cruises might be the perfect vacation

The ultimate one-day guide to Manchester for Oasis fans

The best spots to watch Argentine tango in Buenos Aires