I moved to Edinburgh for the month of August and couldn’t escape this distinctly orange soda, which Scots seem to down in pints or liters. It’s so pervasive that a past commercial even showed a midwife trying to talk a baby out of its mother’s womb by offering one to the unborn child. 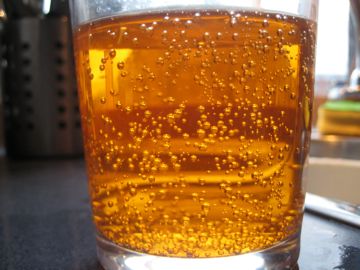 No good has ever come of anything this orange.

What does it taste like? A bit like carbonated bubble gum, so sickeningly sweet that I found it difficult to drink more than three gulps. The drink’s bite is so alarming that it is no surprise to find that Irn-Bru is rumored to have thirty-two flavoring agents in its recipe.

The recipe itself is closely guarded. According to Wikipedia, “The ingredients in Irn-Bru are a secret and known only to Robin Barr, the Chairman, and one unnamed person (who are not allowed to travel on the same plane together). A copy of the recipe is kept in a bank vault in Switzerland. Robin Barr himself mixes the essences of the drink in a sealed room at their headquarters in Cumbernauld once a month.”

The Irn-Bru website contains a bevy of information about the soft drink, including past advertisements. The company is quite famous for its button-pushing ads, like the one featuring a gorilla and the tag line “Give Me Irn-Bru Or I’ll Shuffle My Nuts In Front Of Your Mother.”

Perhaps the world’s weirdest drink. If you don’t agree already, just check out the advert below.

You Gonna Drink That?

Fascinated by beverages? Be sure to check out strange discovery in Argentina, as well as some of the world’s other strangest libations.

What did you think of this article?
Meh
Good
Awesome
Bookmark
Posted In
Travel
Destinations
Scotland, United Kingdom

9 outdoor adventures you had no idea were possible in Britain

How to plan an epic road trip through the Scottish Highlands