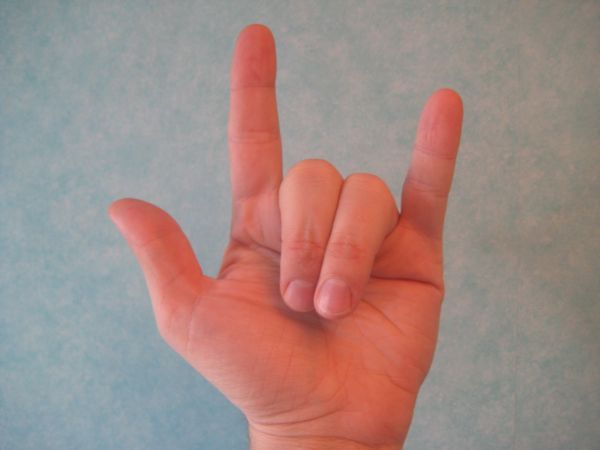 Make some horns, everyone. This is not a list of Aquanet bands…it’s a proper metal list, prepared only for the iPod of those about to rock.

This is the mighty Metallica before they pussed out, complete with one of their best and should-be-patented intros. Injury awaits anyone who can bang their head along to one of the best riffs ever put on tape (at about 1:10). This song turns humans into animals.

A Priest song where Halford isn’t secretly talking about S&M, dudes or…dudes. During the 80’s, about a million kids with oddly shaped Ibanez guitars tried to learn this riff, then cried when they couldn’t make their fingers move fast enough and pinch a harmonic at the same time.

Iron Maiden – “The Number Of The Beast”

I was drunk in cab in Buenos Aires when this last came on. The driver eyed me in the mirror as he goosed the volume a bit, testing me. His hands tapped the wheel in time with the opening riff. I mumbled along with the first verse, enough to make his eyes dart into the mirror again and check my phrasing. He completed a few lines lines under his breath, at which point we came to the chorus and both started screaming. 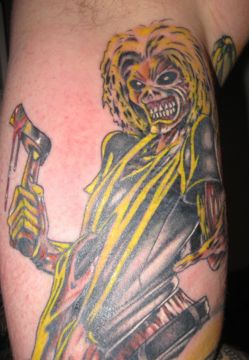 Your mom is so pissed. Photo: cadwallader

You’ve never seen anything like it. Two men in a cab barreling through La Boca, shifting between first and fifth gear (it’s Buenos Aires), windows down, wailing about sixes, beasts and Hell.

Drug dealers ran screaming. Priests genuflected. Mothers scooped up their children, fearful that the demon-car would abduct their spawn and indoctrinate them into this sick cult.

Go ahead. Listen to it. See if it doesn’t do the same to you.

Iron Maiden – The Number Of The Beast (Live) MP3

How Pantera went from a wimpy hair-metal band to something this sinister, heavy and incredible always puzzled me. Many tracks on Cowboys From Hell haven’t held up over the years (“Cowboys From Hell”…are you scared?) but this one has. Bigtime heaviness and a double-kick combine to blow out your woofers.

This song is 38 years old. No kidding. Recorded in 1970, “Paranoid” was a last-minute track added to Black Sabbath’s second album. It was intended simply as filler, to hold together the album that also contained classics like “War Pigs” and “Iron Man”. Classic.

Oh, how we all wanted to say these lyrics as fast as Mike Muir did. And oh, how we all got sent to the same therapist that he did.

It’s a really weird thing, when a catch phrase takes hold of a subculture that hasn’t busted yet. That’s what happened with this song. From skate parks to detention rooms, everyone was offering the same line to their friends, who smiled because they knew where it came from. Anyone who didn’t know was a poseur or a dick. It hardly seems like the rally call for a generation raging against Reagan and teachers and Ritalin, but it was.

“All I want is a Pepsi, and she wouldn’t give it to me. Just a Pepsi.”

Dio – Rainbow In The Dark

Look, it’s a great song. But this is really just a fantastic opportunity to point out that Dio is a complete mental patient.

Ronnie James Dio is the original JK Rowling, seemingly able to sing only about dragons, witches, mysticism and anything…mwah-ha-ha. The man regularly dresses in medieval garb, speaks with a Shakespearean accent and performs with so many erratic hand gestures that it could easily be assumed he has Parkinson’s Disease. Just watch the video.

Which is exactly why we love him.

Dio – Rainbow In the Dark MP3

It’s one of those songs that everybody should have. Just broke up with your girlfriend? “Ace Of Spades”. Hate your father? “Ace of Spades”. Feel like doing meth for the first time? “Ace of Spades”. It’s a catch-all for the moments in life when you simply need to throw and break things. 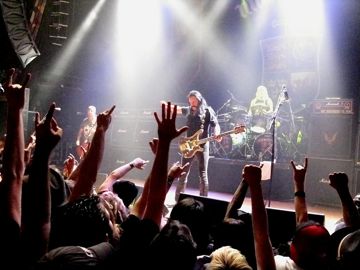 Anyone over 30 will remember the bass riff from this song, which doubled as the theme for MTV News. The track features Dave Mustaine at his snarly-est, bitching and growling his way through every word. It harkens back to a time when Megadeth had something to prove, constantly trying to sneak out of the shadow of Mustaine’s former band.

This band was just plain scary when they started releasing music. I spent the better part of my first Slayer concert pinned under a soundboard at L’Amour in Brooklyn, trying to make my way out from underneath 500 pairs of Doc Martins, all of which seemed to be intent on kicking me in the face. The only thing I could see through feet were the two flashing upside-down crosses on stage.

“Angel Of Death” chronicles the life of Josef Mangele, the infamous Nazi doctor who conducted grizzly experiments on humans during WWII. As controversial as the song was, bear in mind it was also used in Gremlins 2.

Looking for more metal? Be sure to check out our article about the Black Metal scene that’s coming out of developing countries, as well as our tips for surviving your first European metal festival.