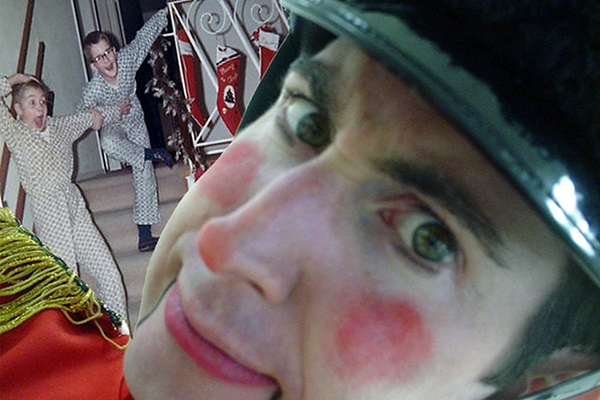 This song, recorded by John Denver among others, is told from the point of view of an “almost eight” year old boy who witnessed his father fall down under the tree the year before. I guess that didn’t make a very good gift for Mamma. The chorus?

Do They Know It’s Christmas? 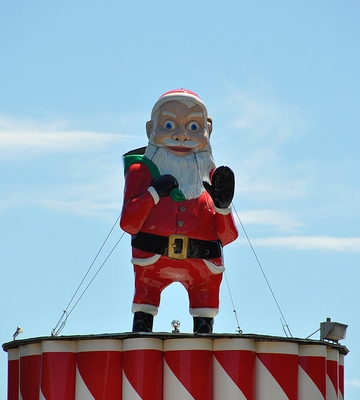 Santa has great potential for being terrifying.
Photo by andersknudsen.

It was for a good cause, but the lyrics are a travesty of geographical ignorance, to say nothing of the Ethiopian people being called “the other ones,” a blatant shout-out to neo-colonialism.

At one point, Simon Le Bon and Sting sing:

(No temperate or cool zones in Ethiopia, guys?)

And the Christmas bells that ring there are the clanging chimes of doom.

(That’s not the Salvation Army bell outside the IGA?)

Well tonight thank God it’s them instead of you.

And there won’t be snow in Africa this Christmas time.
The greatest gift they’ll get this year is life.

Surely you get the idea. If you want to torture yourself, this could be the one. Leigh Shulman was in a group challenge to pick the worst line from the song, and had it stuck in her head for a week afterwards.

Contemporary Christian music doesn’t generally try to string together interesting chord progressions, relying instead on flat piano-like synths and soulful, whispery vocals, and this song by band Newsong is no exception. What is unusual about the song, brought to our attention by Sarah Loving, is the depths to which the band is willing to sink in an attempt to circle-jerk tears from the listener.

The story goes like this. A guy is standing in line at the store, “tryin’ to buy that last gift or two, not really in the Christmas mood.” In front of him in line is a filthy little ragamuffin with a fist full of pennies and a pair of shoes. As he starts counting out the change, he says to the cashier,

Sir, I want to buy these shoes for my Mama, please
It’s Christmas Eve and these shoes are just her size
Could you hurry, sir, Daddy says there’s not much time
You see she’s been sick for quite a while
And I know these shoes would make her smile
And I want her to look beautiful if Mama meets Jesus tonight.

That’s right. When it’s near the end, wouldn’t every little boy want to give his dying mother the gift of shoes before she meets her maker? The important thing is to get the shoes to her before she draws her final breath.

So the guy behind him does what anyone would do. He buys the shoes. And you know what? 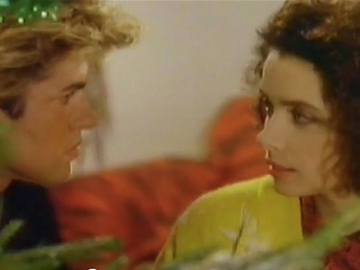 This is on the list because when you catch a whiff of the chorus, the bounding synth line is guaranteed to follow you all day long. Not quite as terrorizing as the following song, “Last Christmas” makes no sense on a number of levels. It’s a lament, a song of obsession. The chorus is so repetitive, you might think that there’s nothing more to the song.

Last Christmas, I gave you my heart
But the very next day you gave it away
This year, to save me from tears
I’ll give it to someone special

Other contenders for worst lines are, “I wrapped it up and sent it / With a note saying “I love you” / I meant it.” We don’t know what “it” is? His heart? Also horrible, “A crowded room / Friends with tired eyes / I’m hiding from you / And your soul of ice.”

Bring up this song by Paul McCartney in a room full of people and you aren’t likely to find one that isn’t repulsed by it.

This nearly tuneless and repetitive-to-the-point-of-making-you-wonder-if-you’re-trapped-in-some-kind-of-time-warp song attaches itself to you like a Rottweiler and you’re lucky if sleep can erase it from the vortex it creates in your brain’s logic centers. But heaven help you if you happen to hear it in passing the following day. You’re right back where you started. There are those that refuse to utter or write the name of the song for fear of its awesome power to destroy a day.

My hint to you, holiday revelers, is to sing a couple lines around people you don’t like if you think you can withstand the effects yourself.

Next Page
Tagged
Music + Nightlife Humor
What did you think of this story?
Meh
Good
Awesome

The most popular book set in every country in the world
This five-star luxury resort in the Maldives is looking for a ‘barefoot bookseller’
The 50 greatest campfire songs of all time
21 drinking games you can play in any bar
Flights to nowhere are growing, and they’re an insult to the planet