There were plenty of amazing things and people to see at Tattoo Show Buenos Aires 2009. Many of the country’s most modified people mingled with the estimated 12,000 convention-goers.

I spotted no less than four camera crews with their noteworthy television personalities in tow excitedly explaining to the un-tattooed masses watching from home just what these strange looking people were doing in the Bauen Hotel. 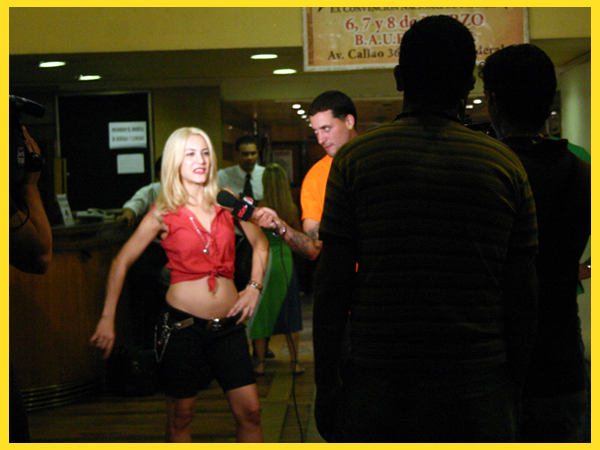 Sponsored by Mandinga Tattoo, this was the fifth year of this convention that in past years was called Convención Nacional de Tatuajes, but now goes by the simple name Tattoo Show.

300 tattoo artists, supply vendors, body modifiers of all sorts including piercers, branders and scarifiers from as far away as Europe and the U.S. and all over South and Central America gathered for three days. The modified came to see and be seen and maybe get some work done.

A tattoo convention is a unique opportunity to compare many artists in one place. Each tattooist has an album of their work on the table at the front of the booth and you get the chance to watch them in action, flip through their books and to ask questions if you’re so inclined.

Tattoo Show 2009 offered three floors of action including an auditorium in which 20 bands played throughout the afternoons and evenings.

The pageantry of Miss Tattoo and a contest for the best tattoos were commented on and judged by a panel of tipsy guys.

One of them inexpertly operated a video camera that fed two live monitors on either side of the stage while various punk rock hits played throughout at medium volume.

I learned several things during Tattoo Show 2009. There is an Argentine branch of the Hell’s Angels, for instance. Here are some on the right escaping my camera: 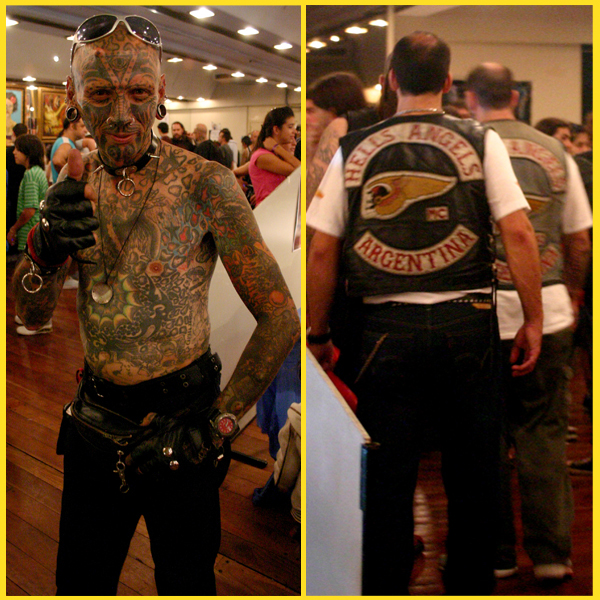 I also met the Alberto Fornes, known as “El Mago,” renowned as the most tattooed man in Argentina (above, left). Highly personable, he shook my hand and asked about my plastic wrapped arm that had just been tattooed.

Here you can see that he will be 52 next month, though he seems much younger. Easy as it is to assume someone with so many tattoos would be exhibiting a cooler-than-thou attitude, I was happy to be recognized by him in passing and greeted warmly the following day. He was alive with excitement in an atmosphere so wholly dedicated to tattoos.

Beer was everywhere. Tattooists were drinking and tattooing at the same time. 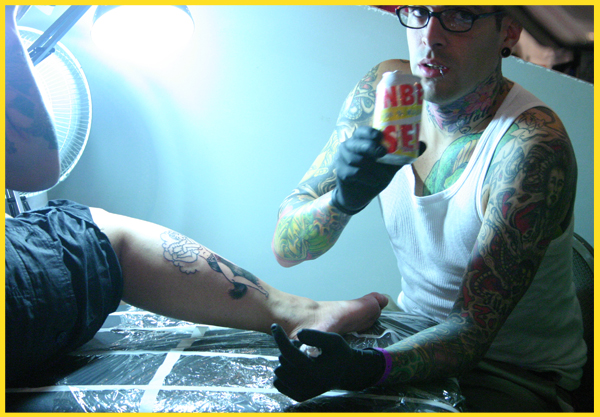 I even saw a brimming plastic cupful in the drink caddy of a stroller. Here you can see crates of empties on their way to be recycled mid-day. 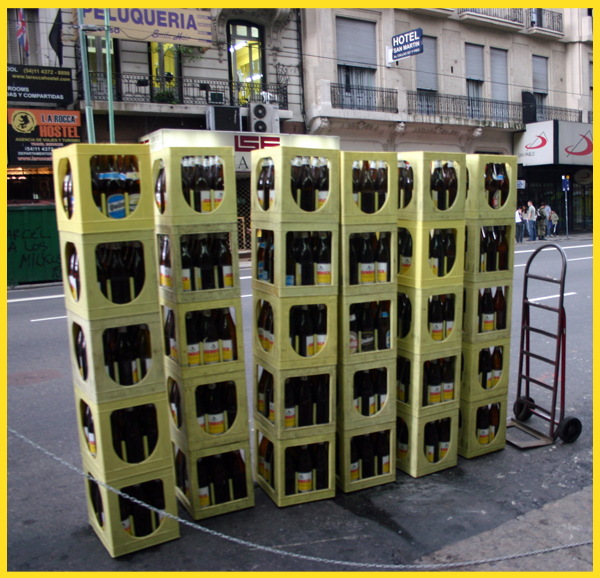 Of all the artists at work during the convention, I saw only one woman. Salome Sajnin’s shop is called Calavera No Chilla. Here she is, gloved and ready to go under a poster of one of her paintings. 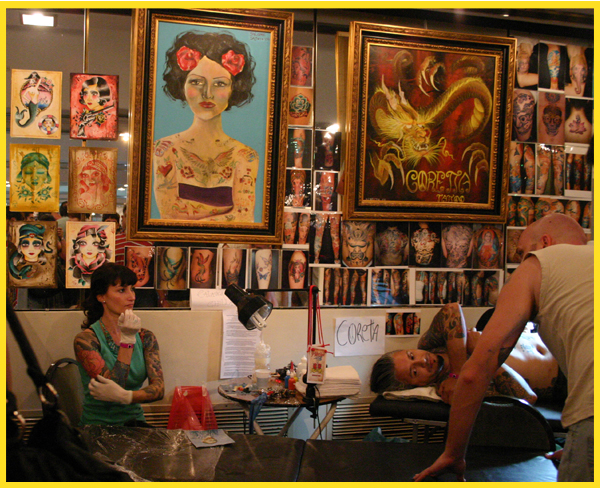 The most impressive thing I saw by far was this tattoo of a dragon fish being done. 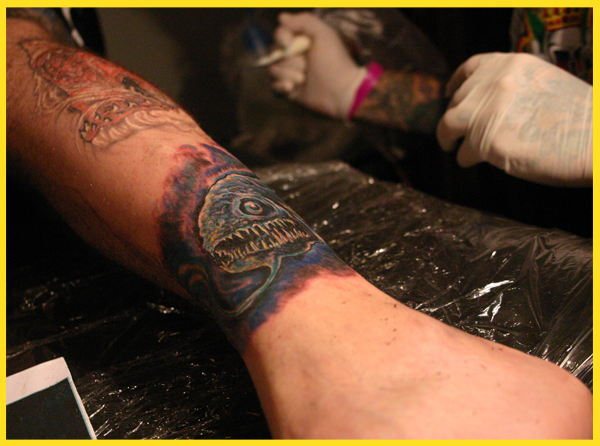 Diego Ortiz spent about three hours filling in the very simple outline he’d laid out using a photograph for reference. The guy getting tattooed endured Diego adding layer upon layer of ink for this full color, photorealistic piece without so much as a sigh.

Ortiz looked back and forth between the ankle and the picture in between interruptions from many friends who stopped by to shoot the breeze. 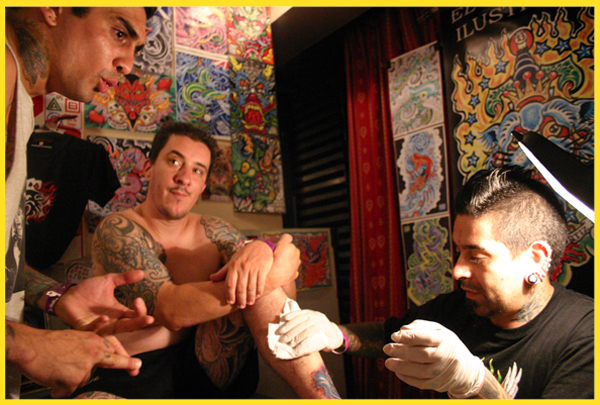 There’s a little something for everyone at a convention like this. The curious can get an eyeful and do a little shopping for some clothes that make them feel just a little weirder while those looking for an artist get the opportunity to find someone who melds with their style.

People in various states of undress show off piercings, tattoos and brands with nary a fear of the stink eye.

Next March, if you happen to be in Buenos Aires, you’re sure to see something to remember if you swing by Tattoo Show 2010.

All Photos by Kate Sedgwick

Tagged
Entertainment Events
What did you think of this story?
Meh
Good
Awesome

The 8 best movies and shows to watch before going to Paris
The wildest pavilions on display at Expo 2020 Dubai right now
Airbnb wants to set you up rent-free in a designer house in Sicily for one year
I traveled to South Africa during Omicron. This is what it was like.
Every type of Japanese sex club and what you’ll find inside