A NATIVE FLORIDIAN, he is now a world citizen, having performed comedy on four continents, but not calling any of them home. He sets up camp for short stints in Paris, Amsterdam, Sydney, Estonia, Beijing, Kuala Lumpur, and pretty much anywhere with an English speaking audience, and most of the time, he kills.

I got a chance to talk to Tom Rhodes via Skype. I heard about his latest project listening to WTF with Marc Maron. My ears perked up when he said his mom was from Buenos Aires, the city I call home. When he started talking about his pilot, I wanted to know more. I wrote to him and was kind of star-struck when I got a reply. On video chat, I saw a relaxed Tom Rhodes in a 4” window on my scuzzy screen, his family home in the background during a visit to Florida.

Rhodes has only had one day job in his life, when he was a bag-boy at Meat World as a teenager. He said, “I’ve been traveling since I was 18. I went on the road right when I got out of high school. I’ve never been trapped in a fucking cubicle or job I hated. Even when I was struggling, at its worst, with no money, it was still kind of great, ’cause ‘I was an artist, man. Oh man, I’m traveling, seeing things.’ I mean, even when it sucks it’s still pretty fabulous.”

He started doing standup while still in high school, made it onto the national radar in his 20s, catapulting from the San Francisco alternative comedy scene of the ‘90s to his own Comedy Central special. By 1996, he’d landed his own sitcom on NBC (Mr. Rhodes), where he played a teacher. He hosted a late night talk show in Holland, and later, a travel show there. An entertainer to the core, he tours almost constantly and still finds time to put together a kick-ass podcast (free on iTunes).

Standup comedy is an American invention; the first standup was Lenny Bruce. Like the blues, like jazz, like rock music, the mix of cultural traditions that is America (as well as our desire to be entertained) gives rise again and again to forms of expression that spread like a new flu. As they travel, they mutate, adapt, find original roots in far flung places, and a new wave, a new subset, a new genre is born. 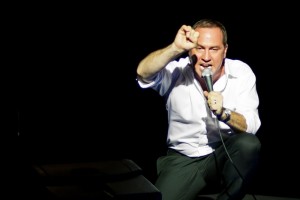 What do people in Buenos Aires think is funny? What about China, Malaysia, Holland, England or Estonia? Tom Rhodes has spent the last 15 years finding out and he wants to show the rest of the world. That’s one of the reasons why he’s put together Road Warrior, a pilot for a TV series that will show comedy and stand-up scenes from all over the world.

I got a sneak peak at the pilot episode of Road Warrior, which follows Rhodes as he hits the ground running in Malaysia. The show opens with a little history and cultural background, and then gets right into the funny stuff. Footage from Rhodes’ sets are up against interviews with Malaysian comics and their sets, and viewers get the comedians’ points of view on topics from to politics to comedic styles to their own cultures and foreign ones.

There are no better ambassadors of culture than comedians — it’s their job to point out to the rest of us aspects of our own societies we neglect to observe, to make us laugh, to make us think. They are the cartographers of culture.

Rhodes said of Malaysia and its comedy scene, “It’s really fantastic. You’ve got Malay Muslims, Indian Hindus and then Chinese people are the main ethnic groups there. And it was a former English colony, so they all speak English. The weird thing there is they all make fun of each other’s races whereas in the States, oh my God, you can’t make fun of Latin people if you’re not Latin or Black people if you’re not Black. But there… I mean, you think of Muslim countries as just being repressed all across the board, but they’re a liberal, modern, Muslim country to begin with. In a lot of regards, they’re a lot more free than we are.”

Some of Rhodes’ jokes go over even better in Malaysia. His girlfriend at the time of the interview, now wife, is Hindu. Rhodes repertoire includes a joke about polytheism in bed. He said, “I did a story about Ganesh. The Hindu god Ganesh is my favorite. I think Hindu is a really fascinating religion. So I’ve done that in the States and it’s got nothing. I mean, a little San Francisco, a little DC, a little chuckle in New York, you know, where there’s ethnic people, but I did that in Malaysia, in Kuala Lumpur, and it murdered, because 30% of the audience is Indian Hindu people, and they know who Ganesh is.”

Rhodes is gregarious, charismatic, and kind of hard not to like — not that I tried too hard. He makes friends wherever he goes. Speaking of his time in Malaysia, he said, “The older, veteran comedians are some of the best friends I’ve ever made in my life. I’ll be friends with them forever.” The rapport he has with Harith Iskander and Douglas Lim reads loud and clear in footage of his casual interviews with them in the Road Warrior pilot.

It turns out that the Malaysian comedy scene is quite young. Iskander was doing standup in Malaysia before there was standup in Malaysia. Hired for corporate events, at first, his audiences had no idea what to make of him. He says, “People thought, ‘Well what’s he doing? Is he our boss? Is he gonna give the annual report?’…and then ‘Oh, he’s telling funny stories. I’m supposed to laugh. Ha ha ha.’” He continues, “They didn’t actually call it standup. They’d call it talk-show.”

“It took a particular Indian comic from Canada to expose Malaysian audiences to ‘Oh, wow! What is this?’” says Douglas Lim in the pilot. Comedian Russell Peters’ work went viral on YouTube in Malaysia, indoctrinating the nation to the genre. “People who recognize that what we do is standup comedy, they go ‘You’re like Russell Peters.’”

I asked how comedy translates across cultures, and if Malaysian comedy is accessible to a wider audience and Rhodes said, “There are certain things that are funny universally. There was one guy there, Papi Zak, this Muslim guy, and he talked a lot about being a Muslim. He drinks and he likes to fuck white women and that’s what he talks about in his show. And he talks about the religious conflict and the guilt that he has and the grief that his mother gives him. I think anybody, especially if you’re from the South and the Christian guilt you grow up with, I think anybody could relate to that.

The older guy, Harrith, he did a lot of stuff about war movies, and there’s a young, good looking Chinese kid, Kuah Jenhan — he’s really inventive. Everybody loves him because he brings new material every week. He’s got a thicker, kind of Chinese accent when he speaks English, but I think it’s still accessible.

You know then, of course, pain, heartbreak, suffering, everybody can relate to those topics. One of the premises of my show is, you know, I wonder what comedians are making jokes about in other cultures. And then there’s the element of: how will my stuff go over?”

Lim kills when he pokes fun at his own culture saying the Chinese are known for finance, kung-fu, and loan sharking — then points out that loan sharking is like finance and kung-fu combined. He says in interview footage, “If you’re going to do racial jokes, the first race you hit on is your own.”

It’s a lesson Rhodes has learned in his own way over the years. “Making fun of the US is always gold, because as an American, you’ve got all these prejudices against you and people already dislike you when you come on the stage in a lot of countries.”

What Road Warrior shows can be said very simply with a single quote from Tom Rhodes, “People around the world have more in common than they realize.” Laughs aside (and there are plenty), what Road Warrior offers is one way for audiences to see that truth.

Since Tom and I chatted, he’s started editing an episode on Australia. By the end of the year he’ll be hard at work on shows about Jakarta, Ireland, and Singapore.

Tagged
Travel Kuala Lumpur, Malaysia
What did you think of this story?
Meh
Good
Awesome

On a Street-Food Mission in Kuala Lumpur's Chinatown