“I WORK FROM A TRUST in the universe that whatever is happening right then is the right thing,” says Marco Cochrane, in an interview at his studio on Treasure Island, San Francisco. We were there to shoot a behind-the-scenes look at the artist behind “Bliss Dance” – one of the most celebrated pieces at Burning Man 2010. 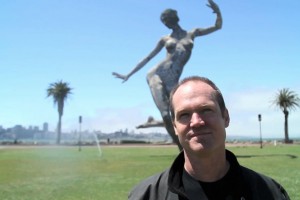 “The piece is about the ultimate expression of humanity. A woman who is genuinely happy in her own space, when everything is okay, they’ll dance.”

The same model provided the inspiration behind this year’s piece from Marco, another large female sculpture to be unveiled on the Black Rock playa. It’s titled “Truth is Beauty,” and Marco offers a fitting commentary on how it fits with this year’s Burning Man theme: Rites of Passage.

“Self-acceptance is a rite of passage,” he says. “When you accept something that you’ve had trouble with about your own self, and realize that it just is there, it is realizing the truth. And truth is beautiful.”

Special thanks to the production team The Werehaus. Music by Adham Shaikh. Evolution time-lapse footage by Ben Wiggins.

What did you think of this article?
Meh
Good
Awesome
Bookmark
Posted In
Events + Festivals