01:00 May 5, 2020
Top Countries
Top CitiesView All Destinations
Trending Countries
Trending Cities
Load More
Prepare to have your mind blown. Or be annoyed. Your call.

Ah, yes, the age-old question: What is art? There exist a great many opinions on the matter, but I’ll defer to the Omniscient God of Last Minute Research Paper Citations, Wikipedia:

Art is the product or process of deliberately arranging symbolic elements in a way that influences and affects one or more of the senses, emotions, and intellect.

Yet while masterpiece paintings, the most prized and consumable art, remain rigidly mummified within frames and museums, other works have sought to show shades of truth attainable only at the fringes of art and existence. Many contest that the artworks below don’t belong in a museum — most of them aren’t. Regardless, each has the power to make you feel as though you live in the biggest museum of all.

Lurking in the twilight shadows of the Paris Metro, a rogue graffiti artist known as Princess Hijab travels light due to her limited color pallet, a monochrome bucket of black paint. Though her work (or vandalism) doesn’t take long, the effects linger far longer in the minds of those who will pass by in the morning. 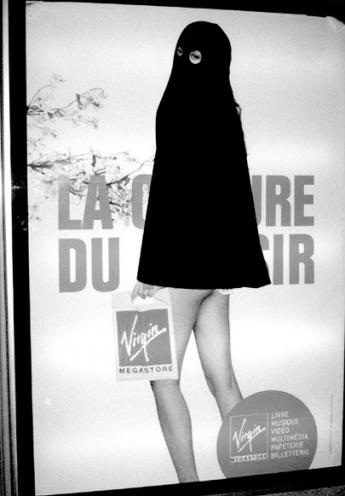 Targeting the nearly nude bodies of the numerous fashion adverts, Princess Hijab smears a thick veil of black paint over the illuminated flesh, muting the cacaphony of skin salesmen and confronting the pedestrians far more pointedly than typical spray-can tagging.

“I use veiled women as a challenge,” she says, in an interview with the Guardian, and she always emphasizes that she isn’t evangelizing to anyone about the rights of any group, though France’s recently imposed Burkha ban comes quickly to mind.

“The veil has many hidden meanings, it can be as profane as it is sacred, consumerist and sanctimonious. From Arabic Gothicism to the condition of man. The interpretations are numerous and of course it carries great symbolism on race, sexuality and real and imagined geography.”

After three waves of feminism (or four, depending on your source), Princess Hajib isn’t easily put in a box of gender criticism. Perhaps the fact that we’re capable of deciphering her mixed messages tells us something about where we find ourselves today, aware of the ways in which sexism both liberates and confines our identities.

“Art” was not the first thing that came to mind when I first heard about Ryan and Dave, adult entertainment entrepreneurs and body modification aficionados. 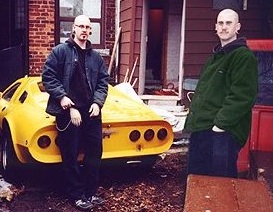 Sure, I’ve seen the split tongues, eye tattoos, implanted magnets, and subdermal implants of the bodymod world–but compared to Ryan and Dave, they’re about as edgy as a henna design.

So here’s the deal: Ryan and Dave decided that since they’re biological twins, it would be cool to see if they could have each others’ appendages. Dave’s entire right arm was severed at the shoulder and then surgically reattached behind Ryan’s right pectoral muscle. 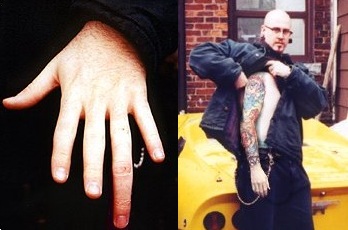 As well, a middle joint-section of one of Dave’s fingers (on the hand he still uses) was removed to be inserted into Ryan’s corresponding finger, giving him an elongnted, alien probe-like finger.

Of all the times I’ve ever imagined how cool it would be to have a twin, I’ve never fantasized about removing his body parts for my own corporeal re-engineering. To be honest, I think anyone would have a difficult time understanding how the twins’ actions qualifies as anything other than a result of faulty brain chemistry. However, one thing we can take away from this is the reassurance of living in a country where we may stand hand-in-surgically-reattached-hand as equals.

Most people think Electric Sheep is supposed to be a screensaver. They’re instantly proved incorrect the second they turn it on.

There are two distinct sides to understanding the beautiful magic of Electric Sheep.

The first is quite simple: using an open-source software called “fractal flames,” anyone can create “sheep,” which are essentially mathematical algorithms transformed into images, moving or still. They’re then integrated into the Electric Sheep population, or database, and when you turn on the ES screensaver, random sheep will appear for the viewer to watch and “like” or “dislike” based on whether or not they find the “sheep” pleasing.

The cool part is that the sheep are able to “breed” with one another, and as with evolution, the most-liked sheep go on to cross-breed with others–of course, their intercourse is limited to mixing fractal algorithms, but the results are mesmerizing. As time goes on, the Electric Sheep become more vivid, complex, and by the principles of “evolutionary art,” more beautiful.

The second side of Electric Sheep is more complex and involves understanding the nature of fractals. As I said, in the case of Electric Sheep, fractals are mathematical, computed algorithms–but fractals exist everywhere in life. In general, though, fractals are just self-similar patterns whose complexity increases as you look more closely.

By dividing the recurring pattern into parts, you’ll find a nearly-identical, but smaller copy of the entire pattern. Thus, with a relatively simple formula, patterns of any kind can become infinitely complex, entirely original yet wholly familiar.

So, can a screensaver based on mathematical formulas transformed by evolutionary principles be called art? Get the screensaver and see for yourself.

Damien Hirst is the world’s richest living artist, with a wealth estimated around $360 million (some sources claim he actually tops the billion mark). So, what’s he most famous for, you ask? Animal corpses preserved in formaldehyde.

In 1991, a mid-twenty-year-old Hirst was commissioned by Charles Saatchi, a renowned art investor, to make anything he wanted. Hirst chose to suspend a tiger shark caught by a fisherman in Queensland, Australia in a glass case filled with formaldehyde. “Something big enough to eat you,” was his only specification for the kind of shark he wanted, and it ran him £6,000. Saatchi later sold the “sculpture” to billionaire Stephen Cohen for $8 million, one of the highest prices ever paid for a living artist’s work. 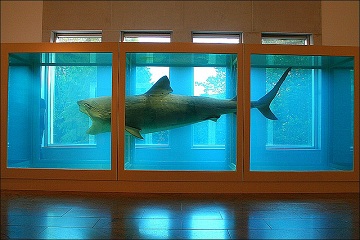 Furthermore, two years prior to Hirst’s creation, Shoreditch artist Eddie Saunders had put a dead shark on display as well, yet his received nowhere near the amount of publicity or praise as Hirst’s, which contended for the Turner Prize. In response to criticism complaining that “anyone could have done that,” Hirst replied, “But you didn’t, did you?”

It’s important to remember that appraising the value of a piece of art is impossible within a vacuum. On its own, The Physical Impossibility of Death in the Mind of Someone Living is only the components of its technical specifications. Yet within a gallery, viewed among a crowd of fellow corpses-to-be, it becomes something else.

Though its title seems to suggest that Hirst has captured in plain sight that which is physically impossible, the work seems to be more of an opportunity for mortals to stand face-to-jaws with Death, granting audiences a temporary moment of invincibility.

Next Page
Tagged
Art + Architecture
What did you think of this story?
Meh
Good
Awesome