What is one food you’ve had on your travels that you NEVER want to taste again?

With more than 50 replies, this gave us some food for thought. Here are some of the responses from our friends on Facebook, starting with the most (or least) popular. 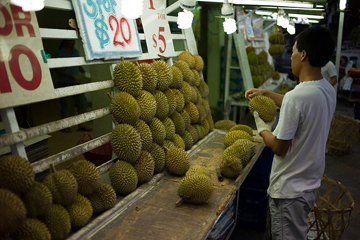 If the spiny exterior weren't warning enough, the durian has a less than appealing odor. This stall in Singapore has many to choose from. Photo: tallkev.

Noël Piper says, “I apologize to all my SE Asian friends who are devoted to it–especially in Thailand–but I don’t want to get within even breathing distance of durian.”

And he wasn’t the only one.

I’m SURPRISED with some responses: curry??? Dim sum??? But TOTALLY concur with stinky tofu (there’s a reason why it’s called “stinky” tofu) and especially durian. I hate durian with a passion and unfortunately, I chose a bad time to relocate to Hong Kong. It’s in season and everywhere!!!

Durian was the most popular response at more than 10%, given also by John Boehme, Meghan Gray, Barry Johnston, and Indra Chopra.

What is it? Well, I’m glad you asked. Durian has been described by travel writer Richard Sterling thusly:

…its odor is best described as pig-shit, turpentine and onions, garnished with a gym sock. It can be smelled from yards away. Despite its great local popularity, the raw fruit is forbidden from some establishments such as hotels, subways and airports, including public transportation in Southeast Asia.

The people who appreciate it love it, but many never get past the smell of the fruit which can be found as in import throughout Asia, but is native to Brunei, Malaysia, and Indonesia. Thailand is now one of the biggest growers of the fruit.

What is it? Well, its tofu fermented in a rotten (er, fermented) brine that may contain all manner of ingredients. Wikipedia says that unlike certain forms of cheese, there is no specific bacteria used to kick off the fermentation process which results in a wide variety of flavors and stenches.

Tell that to the haters, and they’ll probably tell you that they all have one thing in common–they’re incredibly foul.

Tongue & Cheek blog describes catching a whiff of it as being “…hit in the face with the stench of hot garbage mixed with fish sauce.”

Stinky tofu is far from the only fermented food that offends the palates of Matador readers.

Something here in South Africa that I’ve never been able to eat – its called a Smiley – a whole sheep’s head complete with teeth smiling at you.

Jason Summerfield at The Travel Empire says the smiley is a product of the racial and class divide, and can only be found in townships. The tongue, he says, is the prized piece with the cheeks and brains as runners-up. 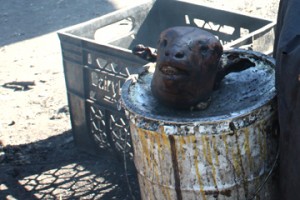 Jessy Wilkes had a problem with boiled pigs head. Heidi Anderson-Ferdinand was disgusted by tempura squid head in Japan.

The winged, the noble, and the cuddly 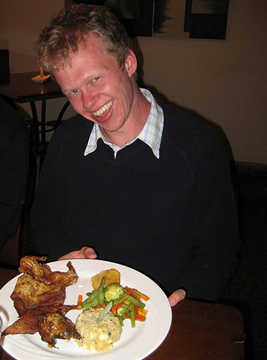 Jaq Greenspon had lamprey in Tallin, Estonia and will never go there again. Scott Hartman once had canned jellyfish.

Guinea pig in Ecuador! Is really gamey and they serve it to you with its head smiling at you :p

…to which R. Clayton McKee replies:

That depends how you order it, Carolina. With rice in a stew it’s not so bad.

Asked for comment, she elaborated on the chicharrones mojados:

I had them in Mexico, while I was studying spanish and working at an orphanage in Chihuahua. I’m not sure where exactly.

Zach Klimko won’t be having any more raw squid guts.

Attila Vaski says, “Well,as much as i love Hungary,and my natural ties to it,this stuff called “kocsonya”…head cheese made in a bowl! BLAAAARF!!!! Probably the only bad thing you’ll eat in Hungary.”

Kara Terrell and Alex Smith would have to be tricked to try Vegemite again.

Ursula Jaro and Susan Beeman Sommer won’t be having any more poi, thank you.

The confirmed expat shies away from the American

It used to be octopus, but I’ve developed a taste for it… maybe Domino’s Pizza?

Do you want to get in on the action? Join Matador Network on Facebook for more fun convos.

And if you want to read more about odd foods from around the world, Matador’s got plenty more for you to read. From 11 weird Japanese foods, to Dog meat and rooster balls, rodent and wine pairings, and what the planet pickles, we’re way into that stuff.

If you have a weird food related pitch, find out how to submit your content to us!