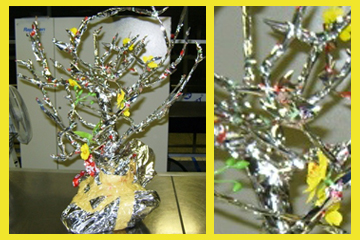 One wonders how and why this traveler was so attached to the plant that he or she made this artsy fartsy attempt to disguise its organic nature. Painstakingly wrapped twig by twig, and ornately appointed, the plant was further disguised in a wrapped box.

The smuggler was foiled by an astute officer in Sterling, Virginia in November, 2008 armed with an x-ray machine, and the aluminum ensconced “plant of Vietnamese origin” was confiscated. 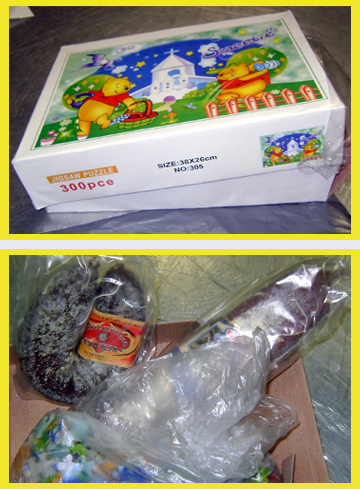 He sure loves his hunny. On his best buddy, that is.

The smuggler of these sausages gets a gold star for irony for packaging a pork product in this Winnie the Pooh puzzle box. Who would think to look for the ground up brethren of Pooh’s BFF Piglet in this shrink wrapped package?

The passenger arriving at Dulles International Airport from Amsterdam in February, 2009 may have been overindulging in a certain other prohibited substance not to have considered the weight discrepancy between two kielbasas and a wafer thin cardboard picture. Ah, sausage smuggler, you defy classification with your nefarious, meat craving ways. 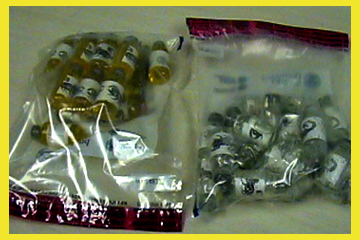 There’s enough to get every cop on the NYPD kissed here.

A woman arriving from Africa wanted so desperately to keep the magic in her relationship that she attempted to smuggle into the U.S. these 42 bottles of Love potion. That’s what she and her husband waiting Stateside told the Customs and Border Protection officers in Philadelphia who intercepted this package from the couple, who claimed it was for personal use.

CBP reviewed the “potion” and determined it to be “inadmissable,” classifying it as a drug. As of March 2008, the plan was to destroy the liquid. Makes you wonder if they’ll have to go down to 34th and Vine to do it.

Dead Bird Head in a Bar of Soap 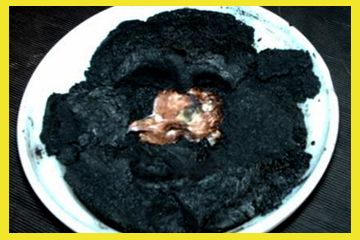 You couldn’t call this one a dirty birdie.

Here in the United States, the least loved are flushed while the most loved are generally interred in a shoebox. Perhaps the most infamous dead bird ever, it will surely live on in the memory of the customs officer who discovered it pressed carefully in a bar of black soap.

The Nigerian traveler who arrived in Baltimore by way of London in March, 2009 denied having any animal products, but was discovered by Customs and Border Protection officers to be in possession of “3.6 pounds of beef, three pounds of chicken bullion, one star fruit and the soap-encased bird,” and summarily charged $300.00. You’ve got to wonder what happened to it in the end, but the funeral procession likely surmounted the excitement of the final farewell.

All Photos courtesy of Customs and Border Protection