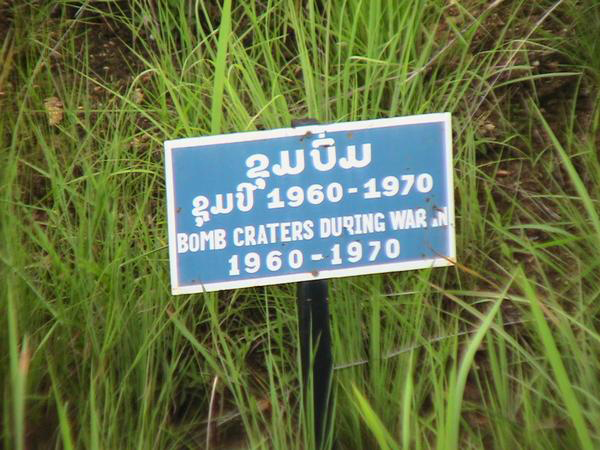 Josh Johnson comes face to face with one of the most heavily bombed places in the world, Phonsavan, Laos.

Phonsavan is a few straight lines in a valley that is fringed with soft green hills. On these few straight lines are a couple hundred concrete cubes; restaurants, guest houses, mechanics dens, pharmacies and vendors that stock sandals and machetes.

Massive artillery shell casings sit rusted on store fronts, home to shrubs and cigarette butts instead of shrapnel and explosives. A missile suspended on a chain, painted crookedly in red: “good, cheap food.”

The skull and crossbones and the hulking shells appeal to my piratical sensibilities and draw me in to the Mine Advisory Group Phonsavan office.

Mine Advisory Group painstakingly cleans up unexploded ordinance (bombs) from conflict zones of wars past. The litter of war that may sit for decades after arms are laid aside.

Illustrations depict the mechanics of cluster bombs. 300 baseball-sized explosives fill the weapon. A few hundred feet above the ground the cluster bomb is split in two and its payload fans out to a 100 square meter radius and then destroys everything. Everything that does not die is taken apart to shrieking pieces.

I face pictures of unsmiling armless villagers. Children. Pictures of men digging around the flanks of a half exposed unexploded missile, 30 years dormant.

A little man walks out from the back of the office space. 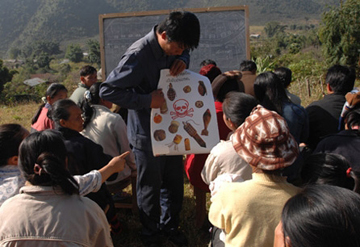 He was about to take his dinner, I can smell the broth, but now he stands a few feet from me smiling to himself, looking at the display in polite, mild interest:

At least two million Tones of ordinance was dropped on Laos between ’64-’73.

I just have to stand here for a minute and bite my lip thinking about 4.5 billion lb. of bombs… what that might look like. Some monstrous emotion wraps around my skull and I’m not really reading anymore, just looking forward.

It is estimated that up to 30% of this ordinance did not detonate. Decades later, unexploded ordinance (uxo) still contaminates rural areas in over half the country. 2,000 lb. shells are sold for $60 at the scrap yard. $100 if they still contain the powder. For many people this is worth the risk.

I feel sick. We did this. Facing the wall of pictures and statistics I clench my jaw and focus on the spot directly in front of me. Still I feel faint. 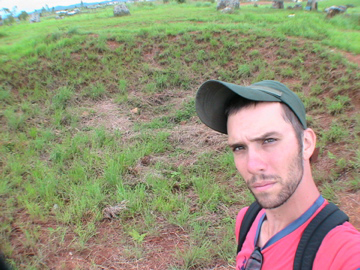 author and bomb crater in the Plain of Jars.

It’s estimated that the United States dropped 1 plane load of bombs on Laos, every 8 minutes for 9 years.

“Excuse me, where you from?” I didn’t really notice him sidle up to me.

My body would rather sob than say it. He takes a small step forward.

Laos is an amazing place to travel and volunteer. If it is Laos lore you seek I suggest Big Brother Mouse: A Book for Every Child in Laos & Gonzo Traveler: Chasing The Dragon In Laos

Also, please check out the video “Conflict Resolution,” a profile of MAG, Mine Advisory Group.

What did you think of this article?
Meh
Good
Awesome
Bookmark
Posted In
Narrative
Destinations
Laos

6 dating tips from around the world

8 things you can only experience in Laos

A unique journey into the heart of Northern Laos

5 fascinating caves in Laos you need to explore

Watch: The US acknowledges the 270 million bombs we secretly dropped in Laos