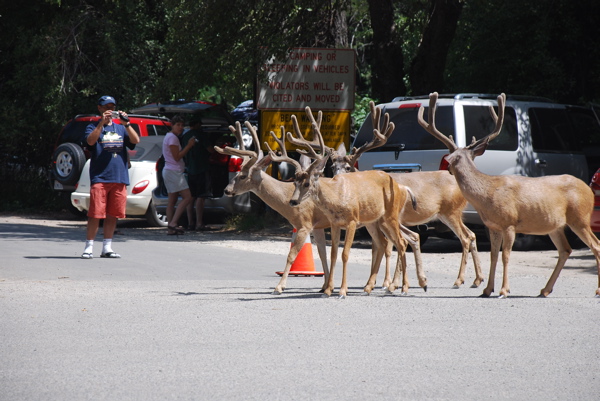 America’s national parks have never been so crowded, so trampled, and at the same time so deeply underfunded. Can’t we just leave them alone?

You’ve probably never heard of the National Parks Promotion Council. I hadn’t either, until the other day, just a few weeks before National Parks Week, when I received a press release, ostensibly from Washington D.C. (but sent from the email address of a California-based independent P.R. professional, the “Interim Executive Director”), proclaiming the formation of a “new organization to promote America’s National Parks.”

The necessity of such a thing at this particular moment in history may be worth questioning. The fact is, whether it’s the recession, fluctuations in the value of the U.S. dollar, or what Yosemite videographer Steven Bumgardner calls “the Ken Burns effect,” or who knows what combination of factors, the parks are bracing themselves for the busiest summer in the history of the system, with upwards of 300 million customers expected by the end of 2010.

“There may be some who believe that any and all forms of construction and development are intrinsic goods, in the national parks as well as anywhere else, who virtually identify quantity with quality and therefore assume that the greater the quantity of traffic, the higher the value received. There are some who frankly and boldly advocate the eradication of the last remnants of wilderness and the complete subjugation of nature to the requirements of — not man — but industry. This is a courageous view, admirable in its simplicity and power, and with the weight of all modern history behind it. It is also quite insane.”

More than 33 million viewers have watched at least one episode of “The National Parks: America’s Best Idea” (have you?). Who knows how many hundreds of millions more have seen the advertising in magazines, on TV, at gas stations and ATM machines nationwide.

In 2009, Yosemite alone bore the weight of nearly 3.9 million pairs of mostly sensible shoes, with a quarter of a million cars entering the park just in the month of July. This year, for the first time in more than a decade, the number of visitors may clear 4 million.

The short of it: business is booming for the handful of concessionaires who hold the contracts to rent beds and showers in the parks, and to sell burgers and pizza and cuddly, overpriced stuffed bears to the hoards.

And Ed Abbey, meanwhile, his bones somewhere in the Cabeza Prieta desert of southern Arizona, is contorting in his sleeping bag.

So again, I think we have to ask (before we can even begin to revisit Abbey’s notion of banning cars in the parks and instead giving every visitor a bicycle): do America’s National Parks really need an aggressive promotional campaign?

Kenny Karst, the ever amiable P.R. manager for DNC Parks & Resorts at Yosemite, Inc. (DNC being the exclusive concessionaire for that park and all manner of other nodes of entertainment and recreation across the globe), points out that even McDonald’s and Coca-Cola continue hard-selling their products through good times and bad.

So too our national parks, he argues, favoring a quote from his boss, Dan Jensen, C.O.O. of DNC’s operations in Yosemite, about how “Yosemite is comfort food.”

PROMOTE, v. [from the compact OED on my desk, which I can barely read (the glass is upstairs above the fireplace)]: to further the growth, development, progress, or establishment of (anything), to further, advance, encourage. To further the sale of (an article) by advertising or other modes of publicity, to publicize.

Some of which — i.e. to encourage — seems like a good idea, right? The rest maybe not so much. Or am I missing something? Are we trying to sell our national parks? Back to ourselves?

“It is but sixteen years since the Yosemite was first seen by a white man, several visitors have since made a journey of several thousand miles at large cost to see it, and notwithstanding the difficulties which now interpose, hundreds resort to it annually. Before many years, if proper facilities are offered, these hundreds will become thousands and in a century the whole number of visitors will be counted by millions. An injury to the scenery so slight that it may be unheeded by any visitor now, will be one multiplied by these millions.”

The precise goals of the NPPC, as stated:

1) “to address downward trends in park visitation” [For more than ten years the numbers had been going down: The kids, it seemed, were more into video games. The rapid-growing impoverished and underemployed segment of the population? Maybe they just needed a nudge.]

2) “to recommend promotional funding strategies, seek partnerships and craft campaigns that serve to stimulate visitor appreciation and appropriate use of the treasured landscapes and educational resources across the National Park System.” [my ital.]

Putting aside for a moment why this might be a good idea — or not — we might ask: how does this organization propose to do such thing? Well, thus: “with resources and in ways presently not available to the National Park Service.” 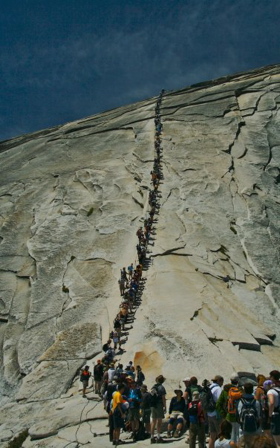 As it happens, the National Park Service is woefully, chronically, shockingly underfunded — to the tune of $500-$750 million annually, according to the National Parks Conservation Association, with “a backlog of maintenance and preservation projects of approximately $9 billion.”

Visitor appreciation and appropriate use

From the beginning, park administrators have been saddled with the impossible task of, on the one hand, preserving these places in as pristine a state as possible, and on the other hand providing access to all citizens.

The landscape architect Frederick Law Olmsted, in his Yosemite and the Mariposa Grove: A Preliminary Report, 1865, argued that all improvements — and there should be many, he said: roads, bridges, cabins, signage, restaurants, the works — must be made in such a way that “should not detract from the dignity of the scene.”

Again, Edward Abbey on the “dignity of the scene” at what is now Arches National Park, as it was more than forty years ago (pardon the long citation, but it’s well written — and hilarious, in a tragic sort of way):

“Where once a few adventurous people came on weekends to camp for a night or two and enjoy a taste of the primitive and remote, you will now find serpentine streams of baroque automobiles pouring in and out, all through the spring and summer, in numbers that would have seemed fantastic when I worked there: from 3,000 to 30,000 to 300,000 per year, the “visitation,” as they call it, mounts ever upward. The little campgrounds where I used to putter around reading three-day-old newspapers full of lies and watermelon seeds have now been consolidated into one master campground that looks, during the busy season, like a suburban village: elaborate housetrailers of quilted aluminum crowd upon gigantic camper-trucks of Fiberglas and molded plastic; through their windows you will see the blue glow of television and hear the studio laughter of Los Angeles; knobby-kneed oldsters in plaid Bermudas buzz up and down the quaintly curving asphalt road on motorbikes; quarrels break out between campsite neighbors while others gather around their burning charcoal briquettes (ground campfires no longer permitted — not enough wood) to compare electric toothbrushes. Down at the beginning of the new road is the new entrance station and visitor center, where admission fees are collected and where the rangers are going quietly nuts answering the same three basic questions five hundred times a day: (1) Where’s the john? (2) How long’s it take to see this place? (3) Where’s the Coke machine?”

This new promotional organization is broad-reaching, to be sure, with a board of directors “comprised of representatives of national park cooperative and friends associations, tourism/hospitality entities, state tourism offices, gateway communities, the National Park Service (in an ex-officio capacity) and others interested in national parks,” operating with “guidance from finance, research and marketing committees comprised of nationally respected persons.” Do they all truly have the park’s (and the people’s) best interests in mind? We hope so.

As the author of a guidebook to Yosemite and Death Valley, and a forthcoming iPhone guide app, as a journalist trying to make a living writing about travel and adventure and land use in these sorts of places, I should perhaps be seeing dollar signs. As a local resident, I should be glad to think that one day my community — and my parks — might be sustained in a healthy way by more and more tourism. But I find I am wary.

Tagged
Activism Hiking
What did you think of this story?
Meh
Good
Awesome

How to summit a mountain that doesn’t have a trail

The Appalachian Trail is open, but not for thru-hikers