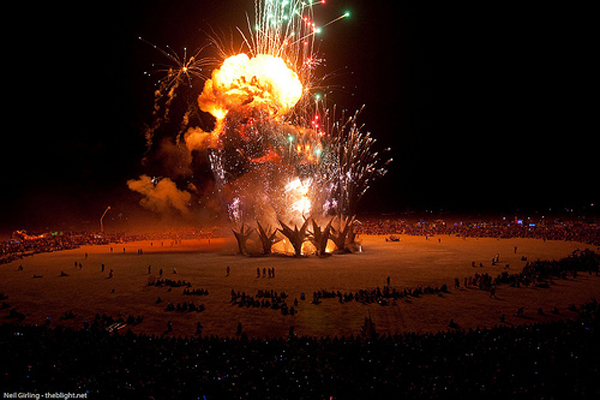 They don’t call it Burning Man for nothing. Virgin burner Joshua Johnson takes us for a walk beside the flames.

Tonight the tents and RVs and camps are empty.

Tonight 43,000 burners gather in ever widening, concentric circles. The Man stands with neon and lumber arms stretched toward the sky.

This is what I have been waiting for.

Flicking a cigarette into the desert wind, a veteran burner tells me he could almost skip it. He says it has become a passe spectacle, that the Burning of The Man isn’t the point.

But I wouldn’t miss it.

And from the bursts of fire, a quarter mile distant, comes glimpses of the tens of thousands who wouldn’t miss it either.

Even the jaded old burners, a little bored, a little self important, wait restlessly for the fire. 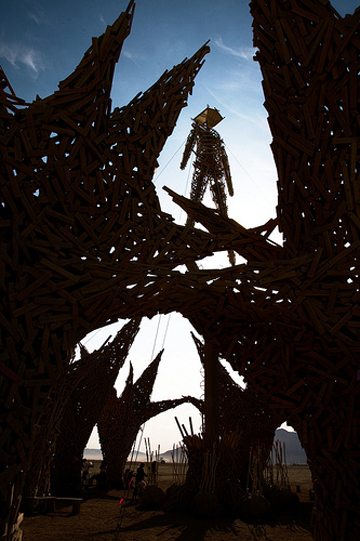 We stoke the collective need for The Man to Burn with our upturned eyes and raised hands and dancing feet.

Firefighters in haz-mat suits and shiny beetle shell helmets hold a wide perimeter around the Man.

Are the firefighters apart of this?

Are they too feeding the fire, or merely waiting to clock off?

As the call comes through on the walkie talkie does their breath catch? Even a little?

For the joy, the slaked anticipation, for the thing that was built to burn, we scream and scream.

The fireworks conclude in an inferno, a torrent of flame curling in on itself in a roiling plume, breathing heat and light on the upturned (screaming) faces.

For a moment everything is fire.

The Man burns to the ground and we rush in, ignoring the commands of the firefighters to stay back. It’s not time! they shout. They only shout once then look on helplessly, shrugging at each other.

Counterclockwise we circle the fire.The air is warped with heat.

A perfect, naked pixie twirls her lithe frame before the curtain of fire.

Have you had an experience at Burning Man you would like to share? Please hit us up in the comments below.

Get your Burning Man fix all year right here on Matador: The First-Timer’s Guide to Participating at Burning Man, BNT’s Best Of The Week: Burning Man Roundup,13 of the Coolest Art Installations in the History of Burning Man.

Tagged
Narrative Nevada, United States
What did you think of this story?
Meh
Good
Awesome

The first cannabis ‘speakeasy’ is coming to Las Vegas