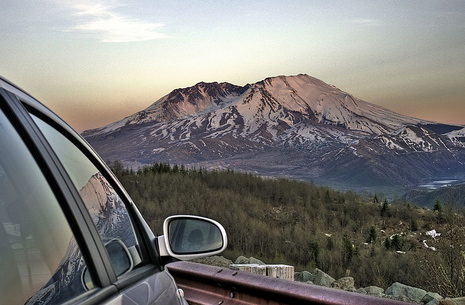 The thought of Dustin and I ascending moonlit scree slopes occupies my mind during the 4-hour drive from Seattle to Mt. St. Helens. I was born the year after Helens blew its top. Just missed it.

When I was a kid the eruption held a sense of monumental awe that folks just couldn’t shake. Every year around the anniversary Old Man Burtchett would point over the ridge of Douglas firs where the ash rose up and circled the earth. He heard it boom.

Who proposed to climb to the rim of the crater in the dead of night, I can’t remember. Dusty had made the relatively easy climb the summer before with no snow and no problems. But now it was February and we had snow shoes and poles if not our best interest in mind.

1:30am. We set off past the fleet of RV’s that hum gently with sleeping snowmobilers. After a few miles the trees break and the face of the volcano begins to pitch upward. Deep gullies slope away and great valleys open up to our headlamps.

Ridges of rock in sporadic slashes. The wind starts to shove. Left then right then up from behind into all the little chinks in my clothing. We hug the ridge now because 5 feet on either side is a sheer drop.

Now the angle of our ascent blocks all view of what lies ahead. It’s all just up. It’s all just dark. In the Big Drop Off little trees grow at absurd drunken angles. My light doesn’t reach the bottom. I have my concerns. I keep thinking that we are going to step right off the edge of the world and not know it. It is all up up up until bang, you’re there, but you don’t see it coming. At least that is what I heard.

I insist we hunker behind a slab of rock and make coco. There is a shy smear of gray to the east, just behind Mt. Adams and I want to sip coco as the sun comes up.

The summit is a tempest. The mountain levels off and then you realize you are standing on a 20 foot cornice that hangs off the edge of the crater. The wind sprays ice. I am so shaken by the wind speeds, the cold and the fact that I am literally hovering about a smoldering lava dome that my footage is scant at best.

Dustin and I crawl to the edge of the volcano like little boys and peer over.

Ever climbed a mountain before? Wanna try… 6 American Mountains to Climb for Big Adventure & 11 Most Dangerous Mountains in the World for Climbers

Tagged
Narrative Washington, United States
What did you think of this story?
Meh
Good
Awesome

5 gorgeous trails not to miss in Olympic National Park

How to spend a perfect 48 hours in Leavenworth, WA this fall

Why Skagit County is worth a stopover between Seattle and Vancouver