I lived in Los Angeles for five years. It was big, loud and occasionally smelly, so really it had all the hallmarks of any great big city, but it was spread out. Living in New York now, I look back on my time there and realize that it never felt like a city. There was simply too much sprawl. I recently had a chance to return to Los Angeles for the first time in years, and was amazed at how much it had changed. New developments and new city ordinances are changing the landscape of Downtown Los Angeles. Here’s how. 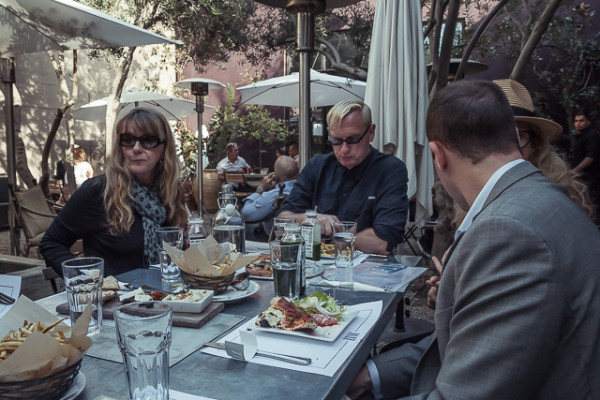 Brunchers at Zinc Cafe in the Arts District. As Downtown Los Angeles becomes more centralized and popular compared to the rest of the city and county, lunch meetings in the more laid-back arts district have become a popular way to spend the mid-afternoon. This has, in turn, caused a spike in rent and development in the area. Gentrification at its finest. 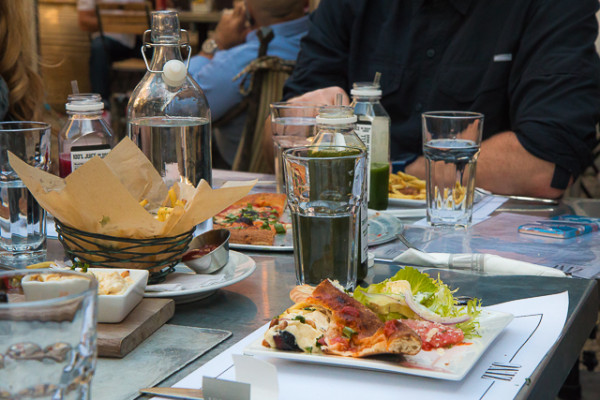 The all-vegetarian cafe, Zinc, was one of the first new restaurants to open in the Arts District as part of the new wave of development in the area. Los Angeles’ food scene has always been among the best in the world, but since 2009, Downtown Los Angeles has added dozens of restaurants, many appearing on “Best in the Country” lists from sources as broad as Yelp and the New York Times. 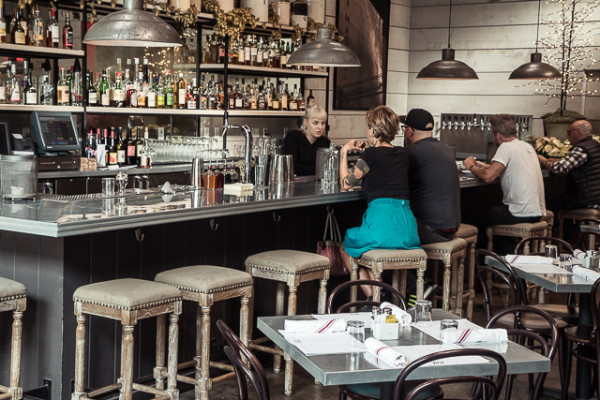 A bartender at Zinc takes orders after the lunch rush. The stereotype of the artist working in bars to provide is a staple of the Los Angeles image and a constant source of derogatory comments towards those in the service industry, and yet more and more New Yorkers are moving to take part due to the lower rent and better weather. The effects are already being noticed: prices of rent have jumped more than 10% over the national average in the last two years alone. 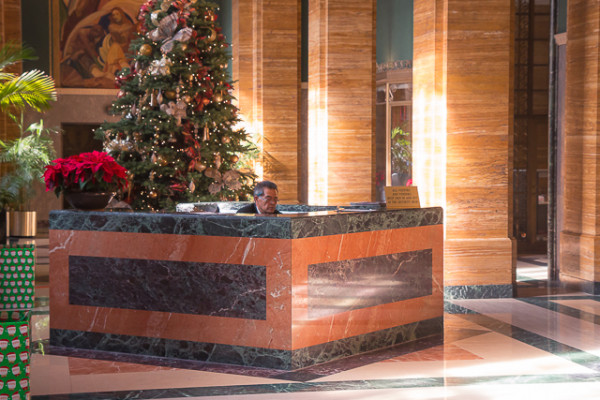 For the past fifty years, Los Angeles has seen a number of important office buildings lie empty, despite their grandiose designs incorporating complex marble and wood work. Not only are these buildings now seeing an increase in use, but rent is actually skyrocketing. Here, a receptionist works in the lobby of the Southern California Edison Power Company building, now owned by PacMutual. The building is currently being renovated to bring out it’s 1930s charm. 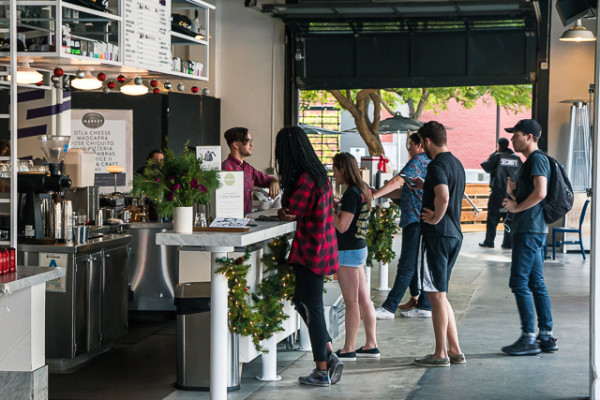 Customers order coffee from the temporary G&B Coffee Stand in Grand Central Market. The main store is closed down for renovations – during the initial rush to modernize the Grand Central Market in 2013, the original G&B was built in only 6 days. Now that business is growing at such an exponential rate, a massive expansion was sorely needed. 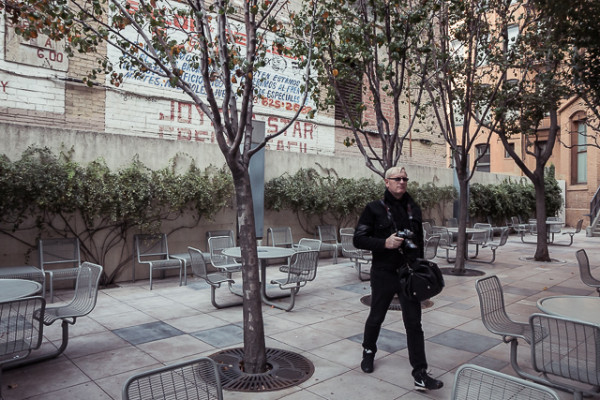 With the increase in centralized development, Los Angeles has made sure to focus on parks and congregation areas, ranging from microparks like the one shown above, located next to the historic Bradbury Building, to the massive Park 101, an ambitious plan to cover the entire downtown stretch of the 101 freeway with a massive green area. 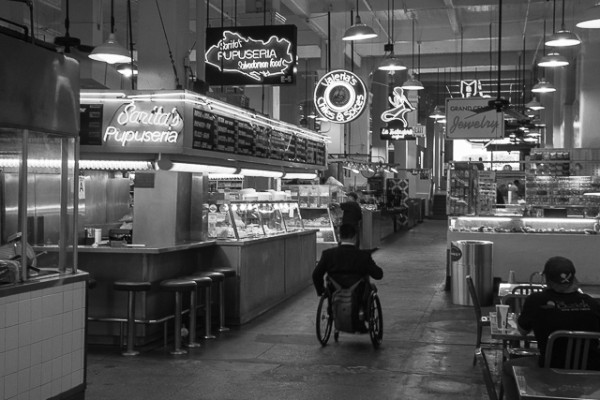 The Grand Central Market in the Homer Laughlin Building. The market has been in operation for over 100 years, but has recently seen huge renovations and new tenants, more than 90 in total. The recent additions of residential units above the market have turned it into Los Angeles’ first true mixed-use development in decades. 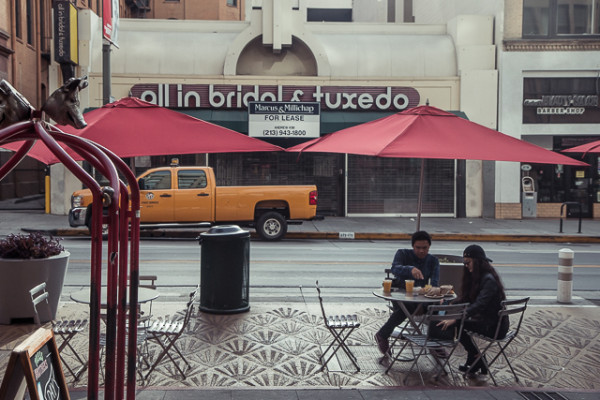 Like New York before it, Los Angeles has developed a strong culture of “sidewalk cafes,” built for quick eating while commuting by foot. Here, two pedestrians spend a few minutes eating food from the Grand Central Market before going on their way. 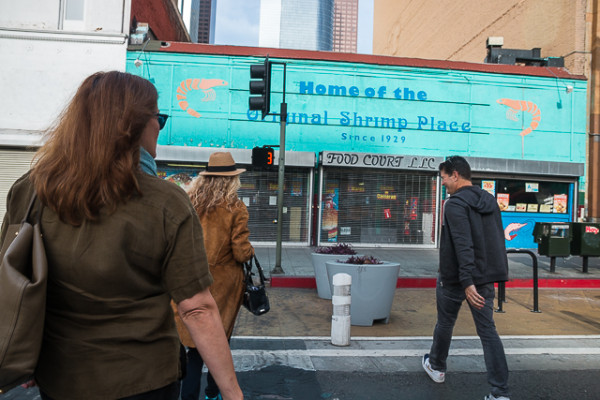 Crossing Broadway on the way to the Grand Central Market in Downtown Los Angeles. Despite the huge amount of growth, there are still a number of original buildings that have not been sold or bulldozed, due to specific zoning or family ownership. These single-story establishments, such as the Home of the Original Shrimp Place, are becoming more and more rare as Los Angeles builds itself upwards. 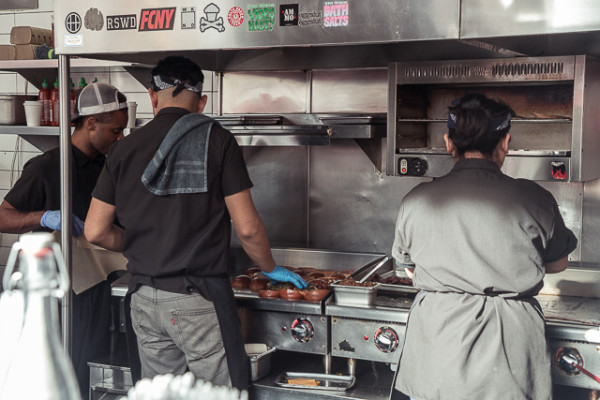 The kitchen staff at Eggslut, a popular food truck-turned-brick-and-mortar, work on the morning rush. Over the course of the day, they will serve over 2000 of their signature dish called “sluts,” coddled eggs on potato puree, cooked sous-vide in a glass bottle. Eggslut was recently named one of the Top 10 Best New Restaurants in America. 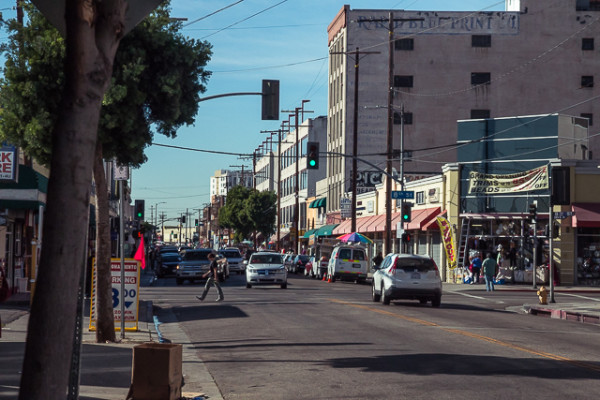 Though popularly known as a city of cars, Los Angeles once had a thriving streetcar system for public transportation that disappeared by the ’60s due to lobbying in the automobile industry. However, with recent approvals for an expansion in the Metro lines and a bid for the 2024 Olympics in the works, Los Angeles is set on a path for a public transportation system to rival New York’s MTA. 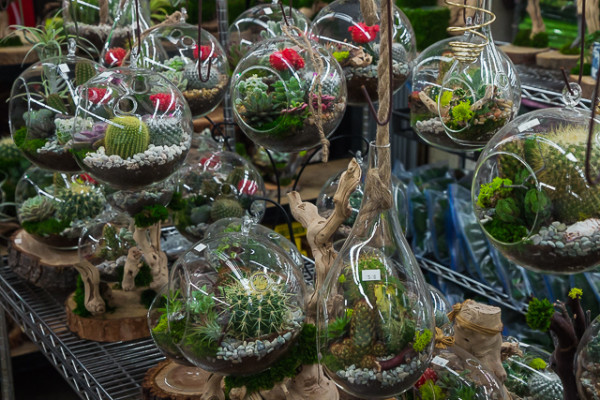 The Los Angeles Flower is the largest floral market in the country and sells everything form tiny cactus to fully-grown palm trees. 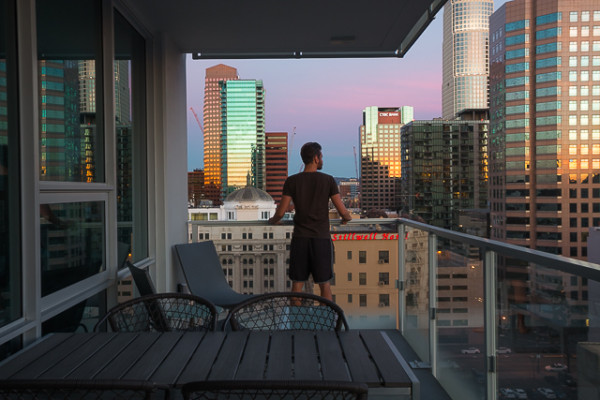 The photographer looks over the sunrise colors of the city from his room at Level Furnished Living. Level provides short stay apartments, meaning you can’t stay there long enough to move in and you can’t stay short enough to treat it like a hotel. As a new, booming creative class moves into the city, this style of living has become increasingly popular for those who want to avoid a lease. 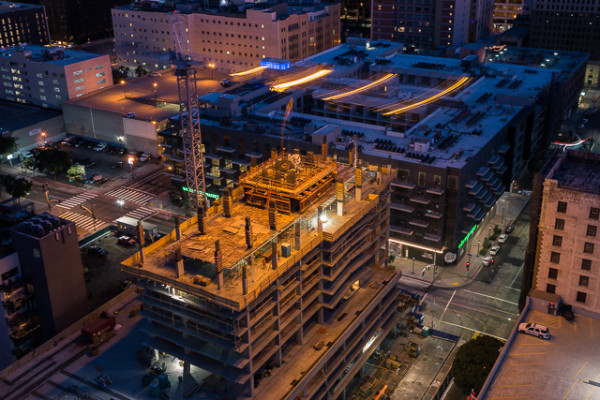 A new building going up on the corner of 8th and Olive. There are nearly 100 new developments in the DTLA area, with the majority being dedicated to either office space or luxury residences.

Los Angeles shouldn’t even be a city. The only reason it survived in the harsh desert climate it inhabits is the diverting of the Owens River to provide water (as dramatized in the film Chinatown). The plus side of having a city here are the sunrises and sunsets – the clouds are usually sparse and high in the atmosphere, creating the city’s trademark orange and pinks. 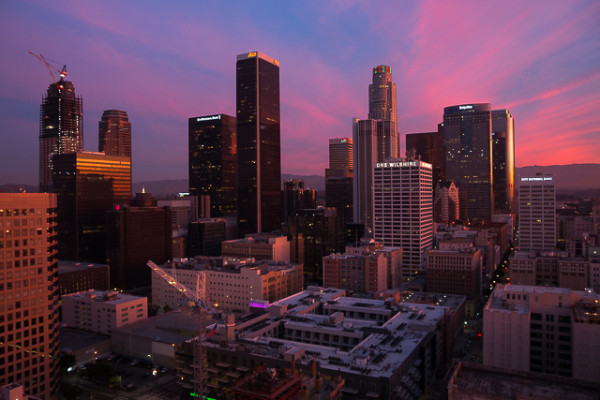 Downtown Los Angeles in the morning. There are nearly 100 new developments being built in the area; the tall building under construction will be the new headquarters of Korean Air. When it tops out, it will be the tallest building west of the Mississippi. 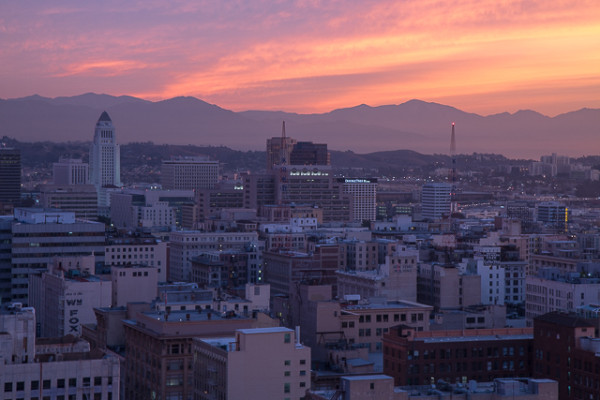 Los Angeles’ sprawl can be attributed to decades of construction limited by a city ordinance limiting buildings to 150 feet, with only City Hall (the white building to the left) allowed to exceed this at 454 feet. Recent buildings got around the height limit by literally buying the unused airspace from buildings that didn’t hit the limit. That ordinance has since been removed, allowing Los Angeles to begin growing upwards like never before. 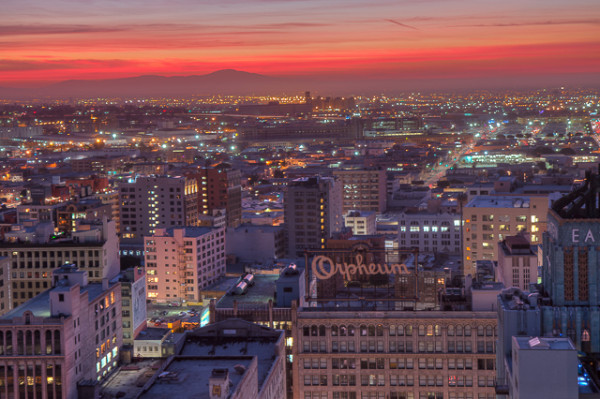 The Orpheum Theatre stands in front of the sprawl of East Los Angeles, spreading from Broadway out past the limits of DTLA towards San Bernadino. The Orpheum is part of the Broadway Theatre District, which saw incredible growth in the golden age of cinema before taking a turn for the worse in the ’50s. While the other theatres have seen minimal restoration, the Orpheum has seen millions of dollars of work to bring it up to modern standards. 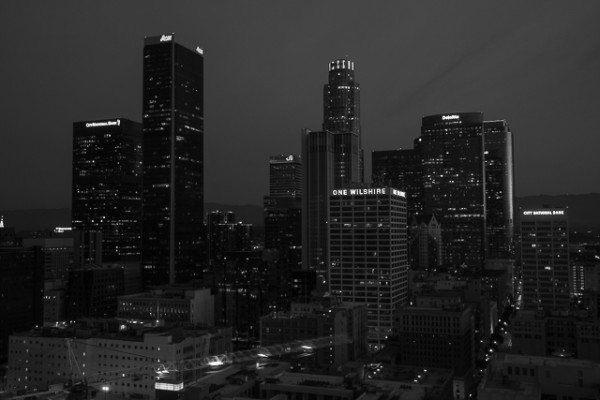 The Los Angeles Skyline is very homogeneous because of earthquake and fire regulations that required every building to have a helicopter pad on the roof, which was seen as very restricting to architects. This measure was removed in 2014 (so long as buildings have extra safety features), thus heralding in a bevy of new designs specifically to update the skyline. 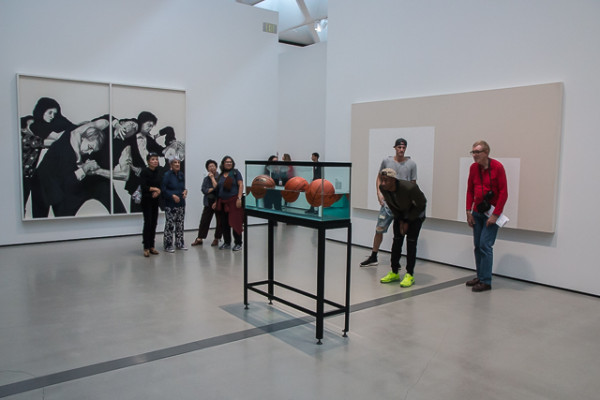 Visitors admire “Three Ball 50/50 Tank,” by Jeff Koons, at the Broad Museum of Contemporary Art. Koons’ work, “Balloon Dog (Orange),” recently sold for over $50 million dollars, making it the most expensive sale by a living artist in history. “Balloon Dog (Blue)” is also hosted at the Broad. 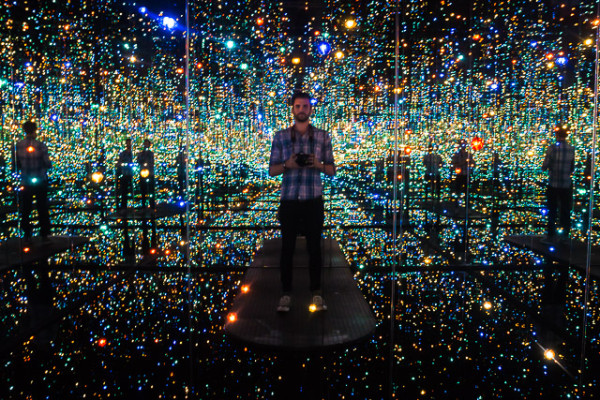 Inside the first primary installation of the Broad Museum of Contemporary Art: Yayoi Kusama’s Souls of Millions of Light Years Away. The mirrored room is the first primary installation in the Broad Museum of Contemporary Art, which opened in September. There have been 50 new gallery openings in downtown Los Angeles in the last two years. 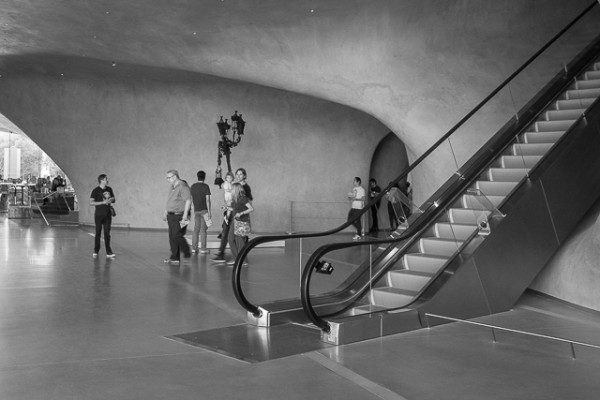 The Broad Museum is financed for $140 million dollars by philanthropist Eli Broad and designed by the architecture firm of Diller Scofidio + Renfro. One of the more experimental bits of architecture in the city, it’s comprised of two parts: the Veil and the Vault. The veil is a large, porous, clothe-like sheet that covers the flowing concrete of the Vault. It opened in September, 2015. 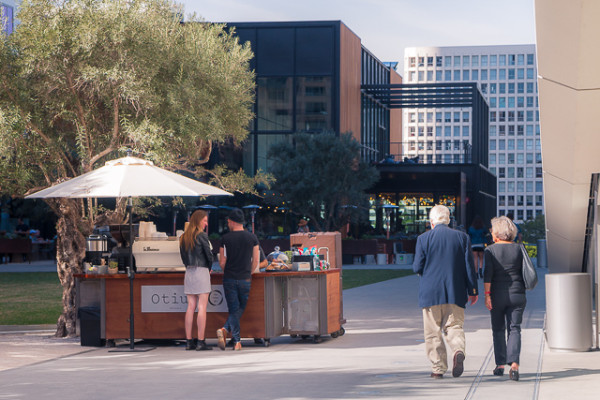 Pedestrians explore the area near the Broad Museum, also home to the restaurant Otium and the Museum of Contemporary Art. While the area has traditionally been the civic center of the city (being home to the courts and police precincts), it has seen a revitalization of the arts culture in recent years, making it a much more cultured block. 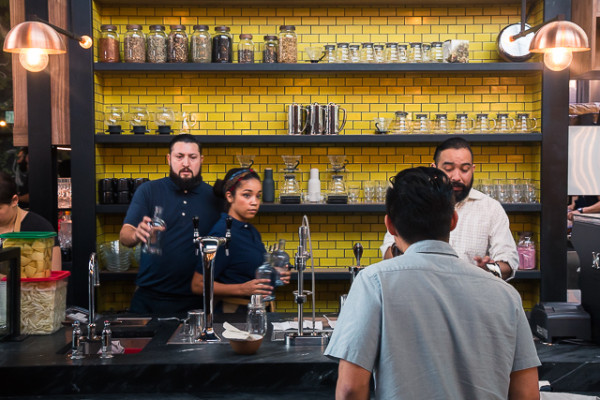 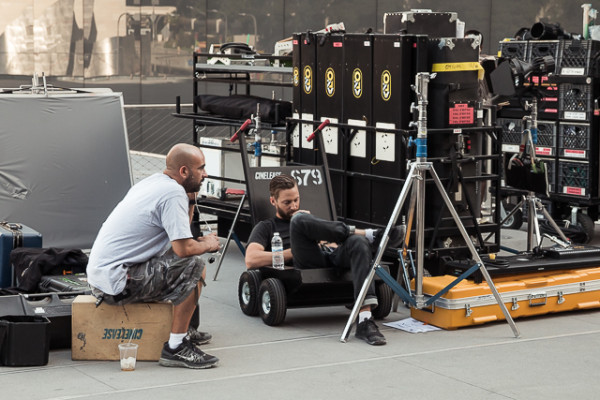 A film crew relaxes during a long day of filming a documentary about Otium, the new restaurant by head chef Timothy Hollingsworth. Film crews are nothing new at Otium: Hollingsworth previously promoted the opening of his restaurant with 4 minute-long a movie trailer. 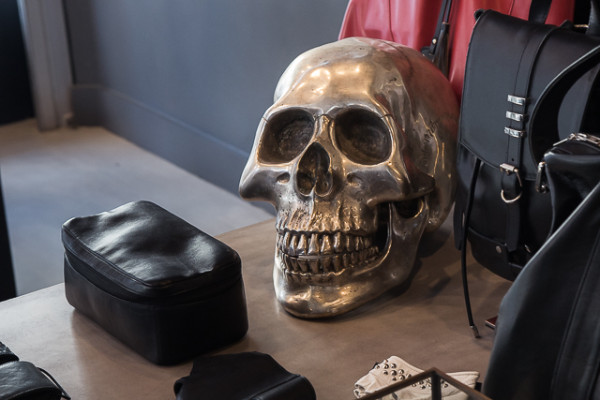 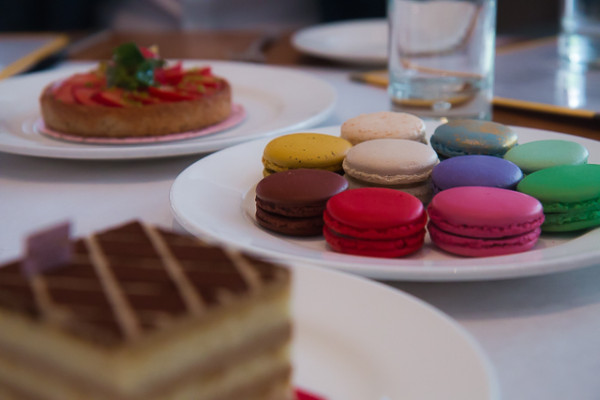 A galaxy of macaroons from Bottega Louie on 7th. The French-style patisserie opened in 2009 and by 2012 was named the Most Popular Restaurant in America by Yelp. 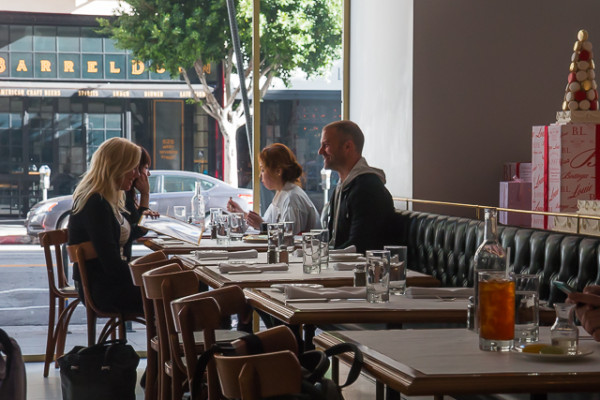 Diners eat breakfast at Bottega Louie. After opening in the defunct Brockman Building (which was being converted to residences before its owner went into bankruptcy) in 2009, Bottega Louie began what’s been called the “7th Street Renaissance,” sparking the construction of several new world class restaurants and increasing the property value tenfold. In 2012, the Brockman Building was sold in the second-largest price-per-unit deal in Los Angeles history.

The author’s travels were sponsored by Level Furnished Living.

Tagged
Maps + Infographics Epic Stays
What did you think of this story?
Meh
Good
Awesome