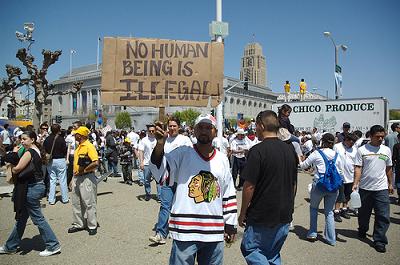 I doubt my hometown has ever made national headlines, but it might just seize its 15 seconds of fame this week.

Unfortunately, it won’t be for anything good.

According to an article in the local newspaper, federal agents launched a raid at the House of Raeford’s Columbia Farms chicken and turkey processing plant on Tuesday, detaining more than 300 workers who are suspected to be undocumented immigrants.

Apparently, the agents have been conducting surveillance on the plant for months, after learning that “more than 775 of 825 workers” were believed to be undocumented… and that managers knew, willfully falsifying paperwork just to fill open jobs.

Employees reported that the raid provoked panic, with a janitor stating he had to seek refuge in a bathroom because he was afraid he’d be run down by “a stampede of people” trying to flee. Raises questions about planning these kinds of operations, don’t you think?

But beyond the local worries that the raid may result in turkey shortages this Thanksgiving (seriously), the notion of a day without Mexicans–and Guatemalans and other immigrants– is suddenly becoming very real in upstate South Carolina.