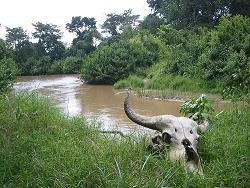 Over at GOOD Magazine, Ryan Bowman confesses his discomfort at being asked to create a new weather map for one of Uganda’s largest newspapers:

My bright and relentlessly cheery “sunny” icon belies the depth of desperation of a third-world country bearing the brunt of what the Ugandan president, Yoweri Museveni, calls an “act of aggression” perpetrated by the rich world against the poor world—in other words, drought caused by global warming brought on by the first-world’s excessive use of resources. My lovingly detailed “partly cloudy” icons could just as easily portend the flooding of thousands of mud homes and attendant displacement, famine, and death just as easily as an afternoon shower.

As Bowman explains, weather maps had been previously unknown in East Africa, where stable seasonal patterns were instead passed along through “inherent, social knowledge”. Now, Uganda sees its first newspaper weather map – one more minute, compelling detail in a tapestry of global climate changes.