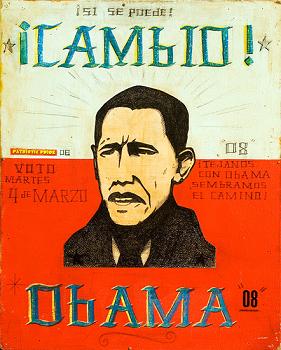 If you think that the race for the presidency has captivated Americans’ interest more than any other election in recent memory, you might be surprised to learn that the interest is just as strong–if not more so–abroad.

Barack Obama landed the cover of Esquire’s Spanish issue in March, and captivated journalist Javier del Pino, who admitted that he was infected by “Obamismo,” “the virus that affects everyone.”

Obamismo has spread throughout Latin America’s magazine pages and blogs. In a recent trip to the bookstore in Mexico City, I bought magazines as diverse as the literary supplement, Letras Libres, and GQ Mexico, all of which mentioned Obama’s name and offered a unique perspective on his candidacy compared to domestic news.

As del Pino concluded, there’s passionate interest abroad in Obama, a candidate who is viewed by many as someone who could restore America’s image before the rest of the world. Apparently, change and hope is a message that translates.

Talk to us! What analysis of the presidential campaign have you read abroad? How is the coverage similar or different compared to domestic coverage? Leave your comments below.