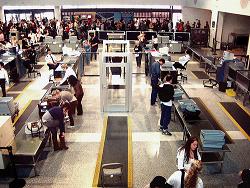 An unlikely coalition of activists is warning travelers to think twice about the data on their laptops before crossing the U.S. border.

Thirty-four diverse groups – including the Association of Corporate Travel Executives, the American Association of University Professors, the Muslim Advocates and the Republican Liberty Caucus – have banded together to protest “suspicionless digital border inspections.”

Dropping the legal lingo, what they’re fighting against is the right of border guards and security agents to search the contents of your hard drive randomly, for no specific reason, and have anything they find be usable as evidence against you. (And yes, that includes those pics of you getting stoned last Fourth of July.)

“In a free country, the government cannot have unlimited power to read, seize, store and use all information on any electronic device carried by any traveler entering or leaving the nation,” the groups stated in an open letter.

Security Focus has the details. The story also has some info on encrypting your laptop to protect against random searches.