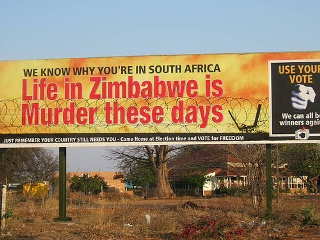 The President of Botswana has broken ranks with most of his African colleagues, and called Robert Mugabe’s so-called re-election to the presidency of Zimbabwe what it is: a farce.

“Botswana does not accept the result of the June 27 run-off election in Zimbabwe, as it violated the core principles of SADC, the African Union and the United Nations,” a Foreign Ministry statement read.

But President Seretse Khama Ian Khama went even further; according to the statement, he will be boycotting this weekend’s summit with Mugabe and the other southern African leaders.

It’s a crucial move, and one that I hope will encourage other southern African leaders (I’m talking to you, Thabo Mbeki and Jacob Zuma!) to speak out as well.

As I wrote in this Matador article last fall, much of the African leadership has been reluctant to criticize Mugabe openly – and their silence allows the Zimbabwean dictator to dismiss Western criticisms of his regime as mere neo-colonialism.

So thank you, Botswana! Let’s hope this is a positive sign for the future. Those sorts of signs have been all too rare in the Zimbabwean story of late.