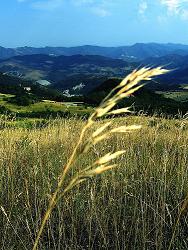 The story outlines a debate that’s raging between economists, farmers and environmentalists over the looming food crisis.

On one side are those who acknowledge that industrial-scale farming practices (including heavy duty fertilizers) are unsustainable and harmful to the environment – but who argue that in the short term we need them to produce the largest possible crop yields to feed the world’s poor and weather the proverbial storm.

On the other are those who think that postponing the implementation of sustainable agricultural practices can only be counter-productive in the long term, and therefore ineffective overall.

What do you think? Short-term pain for long-term gain? Or short-term gain with some resulting long-term pain?

I don’t know what the answer is. I do know, though, that most of us westerners are likely to be cushioned from the consequences, whether they come sooner or later.

I hope that at some point, this dialogue will include the people who’ll be feeling that pain.

Millions of people opt to go without toilet paper. Maybe you should too.