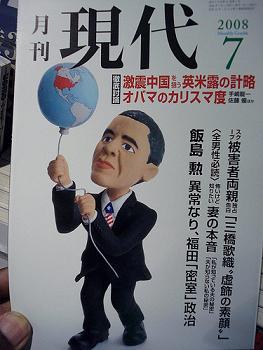 With all the election chatter about Joe the Plumber and Wasilla, Alaska, I guess the news out of Obama, Japan got lost amidst the white noise.

And guess who they want you to vote for?

Since at least March, the 32,000 residents of Obama, Japan have been eagerly following the US elections. After Obama’s primary losses in Ohio and Texas, Obamians got together at their local town hall to sing and dance to cheer Obama up.

They’ve since made a video:

The sleepy town has found the US elections to be a big boost for business. Obama burgers and Obama sushi are reported to be big sellers. It’s not just Americans’ economic future that hangs in the balance this election season. Obamians will be glued to the TV for election night returns hoping that their man wins.