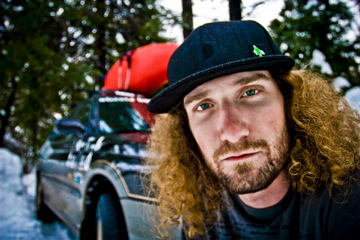 I FIRST SAW one of Shon’s paddling videos in 2009 and was immediately taken by his style.

Somehow, in the combination of music, editing, and camerawork, he was able to evoke not only the “adrenaline” or stoke, or typically more accessible feelings associated with whitewater kayaking, but something deeper, harder to define, something that has to do with connection to the river, to place.

It’s similar (and similarly difficult to define) to what I’m always looking for in narrative writing. It’s about respect.

I couldn’t believe Shon was only 20. I reached out to him, did this quick athlete profile for Matador, and was even more impressed with his chill and humble demeanor. Shon was getting it done on all fronts – kayaking, making films, going to school, representing for sponsors, and continuing to build the online presence and brand of his crew, The Shasta Boyz. In the months following, Shon contributed a couple articles to Matador, one a guide for young athletes looking for sponsorship, the other a guide to buying a helmet cam.

His progression in everything, particularly his ability to tell stories through his filmmaking, has just continued to get more and more exciting.

In a few weeks, Shon (now 22) will be leaving for Japan, where he and crew will be filming the final segments of their upcoming production Slippery When Wet. In the context of recent events, Shon had this to say about the trip:

We are still a go for Japan. This huge disaster has only increased my drive to get over there and help however we can. We are set to fly over May 10th and will be there for 17 days documenting some amazing whitewater while helping with the relief efforts. The way I see it is that Japan needs support more now then ever and canceling our trip would only further hurt Japans economy.

I’m stoked to announce that late last week we named Shon as Matador’s first official sponsored athlete. Media from the Shasta Boyz and their upcoming trip to Japan will be shown across Matador channels for the rest of 2011.

We’re not only impressed by his work ethic and style but the way he represents his hometown, his local crew. His vision for filmmaking as a pathway to bringing awareness and inspiration to others is central to our core values, and what we’ll be teaching students at our upcoming filmmaking program at MatadorU.

Please be sure to reads Shon’s piece today about the decision to follow through with his plans to film a kayaking expedition in Japan.